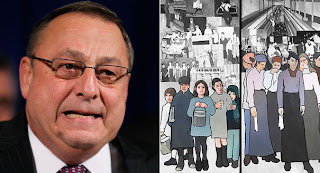 Oh, man! Maine's rookie Tea Party governor, Paul LePage can't get a break.  He's still getting all kinds of flack for taking down those nonessential murals showing nothing but the damned hoi polloi, but on top of that, he got word that 63% of the  mural was paid for by a Federal grant and the Feds aren't looking kindly on his hotshot actions.  Seems  he broke an essential clause in the contract that clearly stated he was supposed to notify people and give them a good reason for pulling those murals from those walls, and then those essential people would have to agree.   So if the Feds demand their money back at current market value, which would be higher now with all the attention, it's the taxpayers who would have to foot the bill.

But once again, Big Business demands the action and the taxpayers get stuck.  Life just keeps imitating life.

***
I know this is Friday Follies and we're supposed to be having fun here, but if we can't squeeze a little  laugh out of this next one, we may never laugh again:

(Reuters) - Most U.S. and foreign corporations doing business in the United States avoid paying any federal income taxes, despite trillions of dollars worth of sales, a government study released on Tuesday said.

Where's the funny, you say?  I don't know. . .you know how some jokes just hit your funny bone and you can't explain why?  This was it for me.  I laughed till I cried.

Notice something interesting about all three of those stories?  They all happened to men. That's because no woman would sit on a toilet seat without looking first.  We have boxes on the walls with disposable toilet seat covers, but if they're not there we lay TP on the seat.  Or we squat without touching.  We don't just drop and hope for the best.  Jeez!  Hard to feel sorry for those guys, isn't it?

But speaking of toilets, there's a toilet museum in Weisbaden, Germany where you can pee on Hitler.  Really.


***
Another story that got a lot of play last week was the one about the guy in Ohio who barked at the police dog.  "He barked at me first", the guy told the police but all it got him was a breathalyser test.  This, too, is one of those shaggy dog stories that keeps popping up every now and then.  So this guy walks up to a police car window and the dog inside starts barking at him.  Understandable.  He's a trained police dog.  He barks at perceived danger.  So then the guy barks at the dog and claims harassment when he gets caught.  It's not pretty out there, folks.  I'm guessing this guy votes, too.
***
But enough of that stuff.  On to the sublime:  I loved this story about a homeless shelter in a 1920s building on Atlanta's Peachtree Street becoming an art studio where artists down on their luck have a place to work. 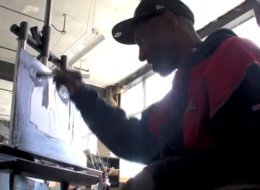 When Anita Beaty decided to start painting in the storefront window of a homeless shelter, people were soon looking in and asking to join."It seemed to me that there were lots and lots of creative people among folks who were experiencing homelessness," Beaty says.
And she would be familiar with their needs -- Beaty is the executive director of the Metro Atlanta Task Force for the Homeless. She'd been looking for a way to combine her love of art with her passion for eliminating poverty.

***
And I really loved this 60 Minutes segment on the Harlem Teen Gospel Singers.  If you haven't seen this before, I hope you enjoy it as much as I did.   This story and the one above tell me we have not given up on joy.  It's out there, and when we find it, let's pass it on: