Immokalee: A Grassroots Journey to a Penny a Pound and a Victory of the Meek

“The Coalition of Immokalee Workers has just proven that when you get up every day to fight for what is right, when you don’t give up even when all the odds are against you, when you don’t compromise on basic principles of fairness, and when you build a strong grassroots movement, economic justice will prevail over greed, and the least fortunate can successfully stand up to the powerful."   Sen. Bernie Sanders, 11/17/10 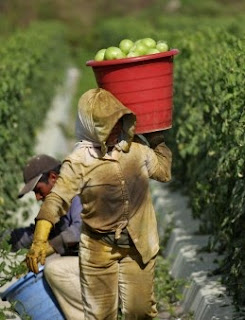 In March, 2009, I came across an incredible story of modern-day slavery and worker abuse in the tomato fields of Florida, one I couldn't believe I hadn't known about until then.  I wrote a piece called, "Harsh Realities in a Country gone Mad with Greed":


This is one of those stories that will seem so unbelievable, so beyond the pale, so, well, un-American, you might be tempted to either disregard it completely or cast it in a fictional light in order to escape the obvious conclusion: There are horrors perpetrated on human beings in this country that rival those in the worst of the worst of any third-world country.

This is the story of the cruel exploitation of produce pickers, but it didn't happen in the 1930s of Steinbeck's "The Grapes of Wrath", or in the 1950s-60s of the "Harvest of Shame" , or before Cesar Chavez began to organize migrant farm workers. It happened--and is happening--right here, right now, under our watch, in the 21st Century. (Read the rest here.)

I promised at the time that I would keep the story going, that I would report on the progress, that I wouldn't forget it or ignore it--but, aside from a few links and retweets, I did just that.

I don't pretend that anything I might have passed along would have made a difference, given the paltry number of readers I welcome regularly to my blog, but thankfully there were advocates with real power who backed the workers, who strong-armed the packing companies, who threatened and carried out boycotts of the chains buying tomatoes from those companies.  And finally, last week, after  a struggle lasting more than 15 years, their efforts have begun to pay off.

From The Nation:  At a news conference on a farm outside of Immokalee in southwest Florida, Jon Esformes, operating partner of the fourth-generation, family-owned Pacific Tomato Growers—one of the five largest growers in the nation with more than 14,000 acres in the US and Mexico—declared, “In a free society, few are guilty, but all are responsible.”

And with that he announced an agreement with the 4000-member Coalition of Immokalee Workers (CIW) to implement a penny per pound pay raise—which stands to increase workers’ annual earnings from about $10,000 to as much as $17,000—and establish a code of conduct that includes an external complaint resolution system, shade and protective equipment in the fields, and a worker-to-worker education process on their rights under the new agreement.

A penny a pound.  It may not sound like much, and--let's face it--it isn't, but this was a company who joined the discussion kicking and screaming and came out at least pretending to recognize the folly of their former ways.  The penny-a-pound concession is what they were after, but it takes a back seat to the fact that tomato pickers deserved to be treated like human beings and they didn't stop fighting for that very simple right until they had won it.

It didn't hurt that four Democratic senators from the north, Ted Kennedy, Bernie Sanders, Dick Durbin, and Sherrod Brown, became advocates for the Coalition of Immokalee Workers, holding a Senate hearing about the abuses in April, 2008, and, at least in Sanders' case, following up and keeping sunshine on the story until the first baby steps were taken last week, when Pacific Tomato Growers, shunned by every fast-food chain in the land and many major supermarkets, finally hollered Uncle.

In January, 2008, Sen. Sanders went to Immokalee to see the conditions there for himself:


In talking with workers who go out into the fields I learned that they make approximately 45 cents for every 32-pound bucket of tomatoes they pick. This wage has not increased since 1998; and in fact, farm worker wages have dropped 65 percent in the last 30 years, after adjusting for inflation. I also learned that while it is possible under optimum conditions to make as much as $10-$12 an hour, the average hourly wage is far lower than that. In fact, most workers in the tomato fields earn about $250 a week in income. Why are wages so low?

I also learned that there is no overtime when workers work more than 8 hours a day or 40 hours a week. There are no benefits. Health care is a serious problem especially for people who do hard, physical work as they do in the tomato fields, yet employers offer no health insurance. The housing that I saw was deplorable and extremely expensive. It was not uncommon for eight or 10 workers to be paying $500 a month to live in a trailer which, in the city where I was mayor, would never have passed a safety inspection.

"Is it really going to take an act of Congress to get Florida's tomato pickers a raise?" an editorial in the St. Petersburg Times asked. "The men and women who work the fields in Immokalee earn 45 cents on average for every 32-pound bucket of tomatoes harvested. It is a meager wage that has not been raised in more than 20 years. Yet when a couple of fast food giants generously agreed to pay workers an added penny per pound, the Florida Tomato Growers Exchange sabotaged the deal and has refused to negotiate even after congressional leaders offered to be intermediaries."

So last week, more than two and a half years after the senate hearing, the Coalition of Immokalee Workers, 4000 strong, won for their people a meager pay hike and a promise of better working conditions.   Still, they see this small victory not so much by what they gained but by how they gained it.  They showed the people willing to work on their behalf that they were worth the effort by being smart about their protests.  They came out of the shadows to shine a light on what a human being working under those conditions was forced to endure.  Many of them couldn't speak or understand a word of English, but a necessary dialogue took place and the people with the power to help understood the need and went to work.

It won't go without notice, by me, anyway, that Sen. Bernie Sanders stopped what he was doing, went down to Florida to take a look, and didn't give up until the thing was done. (I'm not surprised that Ted Kennedy worked hard to get this thing done either, even as his final illness was taking its toll.)

To his credit, Florida governor Charlie Crist, after initially refusing, finally met with the CIW in March, 2009 and publicly condemned the actions of the growers. 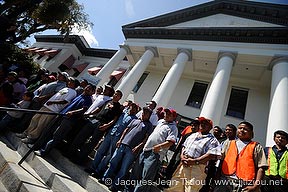 Still, it took until now, after a dozen years of food chain and supermarket boycotts, after a senate hearing on field worker abuses, after scores of TV, newspaper and magazines exposes, and more than a year and a half after Gov. Crist signed his letter of farm labor support, before the Florida Tomato Growers Exchange finally knuckled under and agreed to a penny a pound increase and a promise of a stab at fair play.

One final note:  It's apparently not over till it's over.  Publix Supermarkets still refuses to agree to the Fair Food Principals, so the CIW and certain Florida churches are collecting pennies in penny folders to hand out to Publix managers as a reminder.  It's their Thanksgiving message:  "Farm Workers in the fields are Family, too". (More reading here.)

Have a loving and bountiful Thanksgiving.  Enjoy your long weekend.  But there is no end to the turkeys out there, so I'll see you on the front lines again next week.