That Jefferson - What a Spoilsport 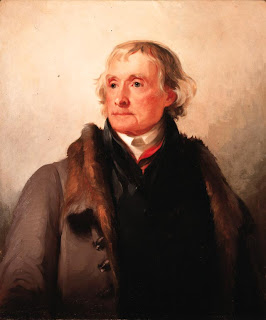 [Thomas] Jefferson was a student of history--not just the compliant and safe history that praises our own time or country or ethnic group, but the real history of real humans, our weaknesses as well as our strengths. History taught him that the rich and powerful will steal and oppress if given half a chance. He described the governments of Europe, which he saw at first hand as the American ambassador to France. Under the pretense of government, he said, they had divided their nations into two classes: wolves and sheep. Jefferson taught that every government degenerates when it is left to the rulers alone, because rulers--by the very act of ruling--misuse the public trust. The people themselves, he said, are the only prudent repository of power.

But he worried that the people--and the argument goes back to Thucydides and Aristotle--are easily misled. So he advocated safe-guards, insurance policies. One was the constitutional separation of powers; accordingly, various groups, some pursuing their own selfish interests, balance one another, preventing any one of them from running away with the country: the executive, legislative and judicial branches; the House and the Senate; the States and the Federal Government. He also stressed, passionately and repeatedly, that it was essential for the people to understand the risks and benefits of government, to educate themselves, and to involve themselves in the process. Without that, he said, the wolves will take over.

Here's how he put it in "Notes on Virginia", stressing how the powerful and unscrupulous find zones of vulnerability they can exploit:

"In every government on earth is some trace of human weakness, some germ of corruption and degeneracy, which cunning will discover and wickedness insensibly open, cultivate and improve. Every government degenerates when trusted to the rulers of the people alone. The people themselves therefore are its only safe depositories. And to render even them safe, their minds must be improved. . ."

I have lost faith. I woke up this morning and discovered that the tiny fragment of faith I held onto--that hope that this president, this White House, this congress would finally be the ones to deliver us from the clutches of the wealthmongers and powerbrokers--has disappeared entirely.

I am just one in a flock of sheep and the wolves are near enough now that I can see their slimy, jagged teeth. The horror is that, even now, there are still a vast number of us who want to believe that those same wolves are not there to devour us, but to save us.

This is not a nightmare, this is reality:

Unions are broken and jobs with livable wages are gone forever.

Foreclosures and bankruptcies are the accepted norm.

The middle class has become an anachronism.

We owe our souls to China

Our government has abdicated its constitutional obligations and sold us out.

The rich will go on profiting from our misery.

And for the last seven days our attention has been laser-beamed on a black professor being arrested in his own home in Cambridge, and on Sarah Palin's Farewell Picnics.

We are still frantically thumping our chests, pretending that America is alive and well, while the rest of the world sees us as we really are--a sad and sorry lot.