Chamber of Commerce vs. Labor Unions: Guess who Wins?

Labor is the great producer of wealth: it moves all other causes.
Congressman Daniel Webster, 4/2/1824

With all their faults, trade unions have done more for humanity than any other organization that ever existed. They have done more for decency, for honesty, for education, for the betterment of the race, for the developing of character in man, than the other association of men.
Clarence Darrow, The Railroad Trainman, 1909

Without labor nothing prospers.
Popular banner

The history of America has been largely created by the deeds of its working people and their organizations. Nor has this contribution been confined to raising wages and bettering work conditions; it has been fundamental to almost every effort to extend and strengthen our democracy.
William Cahn, labor authority and historian

We insist that labor is entitled to as much respect as property. But our workers with hand and brain deserve more than respect for their labor. They deserve practical protection in the opportunity to use their labor at a return adequate to support them at a decent and constantly rising standard of living, and to accumulate a margin of security against the inevitable vicissitudes of life.
President Franklin D. Roosevelt, fireside chat, 1936

If I were a worker in a factory, the first thing I would do wo 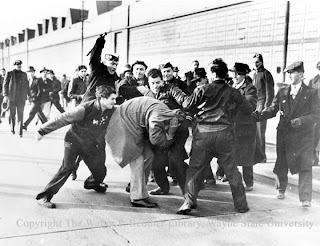 uld be to join a union.
President Franklin D. Roosevelt

The first thing a dictator does is abolish the free press. Next he abolishes the right of labor to go on strike. Strikes have been labor's weapon of progress in the century of our industrial civilization. Where the strike has been abolished … labor is reduced to a state of medieval peonage, the standard of living lowered, the nation falls to subsistence level.
George Seldes, Freedom of the Press, 1935

The right to join a union of one's choice is unquestioned today and is sanctioned and protected by law.
President Harry S. Truman

Only a fool would try to deprive working men and women of the right to join the union of their choice.
President Dwight Eisenhower (1953-1961), general and Allied Supreme Commander in World War II

There's s a direct relationship between the ballot box and the bread box, and what the union fights for and wins at the bargaining table can be taken away in the legislative halls.
Walter Reuther

The history of the labor movements needs to be taught in every school in this land. America is a living testimonial to what free men and women, organized in free democratic trade unions can do to make a better life. … We ought to be proud of it!
Vice President Hubert Horatio Humphrey, Jr. (1865-1969), Lyndon Johnson Administration

Our labor unions are not narrow, self-seeking groups. They have raised wages, shortened hours, and provided supplemental benefits. Through collective bargaining and grievance procedures, they have brought justice and democracy to the shop floor.
President John F. Kennedy, 1962

The AFL-CIO has done more good for more people than any (other) group in America in its legislative efforts. It doesn't just try to do something about wages and hours for its own people. No group in the country works harder in the interests of everyone.
President Lyndon Johnson, 1965


(Above courtesy of the American Labor Studies Center.)


The EFCA is an attempt to radically overhaul our labor law system in the favor of union organizers. EFCA is a power grab by union bosses who seek to inflate union membership by skewing the careful balance that is designed within our labor law system.
NAM (National Assoc. of Manufacturers) Talking Points against EFCA

Nobody should be surprised that business organizations like the Chamber of Commerce , The National Right to Work Committee and the National Association of Manufacturers are looking out for themselves. The whole purpose of organizing is to build up membership, and thus the funding, to promote their own common welfare.

Labor unions are in business for the same reasons. There have always been labor or trade organizations where workers could gather in order to protect their livelihoods (and, in some cases, their lives.)

In the days before industrialization, there were guilds, alliances and brotherhoods. In every workplace, then and now, employers and employees had relationships that could best be described as contentious. Neither side has ever trusted the other. Every day in every way self-interest reigns supreme.

Every now and then, in an all-too-rare but slightly enlightened environment, a stab at "concessions" is made. But even then, going in, it's a pretty safe bet that management will come out ahead 100% of the time.

Even the most labor-supportive of us can understand the reasons behind the statement above. The difference between labor and management--the main, the very ultimate difference--is that management holds all the cards. They don't have to do any of the things labor comes up with. Not unless they're forced to by some ridiculously tight-assed government agency. (Which, luckily for them, they haven't had to confront for ages now.)

Whole cities of people, especially in the South, think they understand the need to keep labor from gaining even an inch. Unbelievably , many of those naysayers and saboteurs are laborers themselves. Somehow they've been convinced that the way to success is to keep management happy at any cost. (It's an odd spectacle when workers cut off their noses to spite their faces. They look really, really foolish.)

Their motto: Never complain, always explain, give hosannas to the highest for your crummy workplace and your measly paycheck. And if you really want to keep management happy, get behind them in every skirmish, whenever unions rear their pushy little heads.

They'll chant, "I hate unions". They'll march against them and connive with management to keep them out. They'll even repeat management's talking points, as if they're their own:

1. Unions make workers lazy. They can get away with murder if there's a union behind them.

2. Unions try to bleed their nice company dry with "demands" for high wages and decent benefits.

3. Unions "demand" safe workplaces. All those regulations cause no amount of grief for the Lords of the Manor.

4. Unions "force" their will upon workers.

5. Unions are evil because, well, because they're UNIONS . 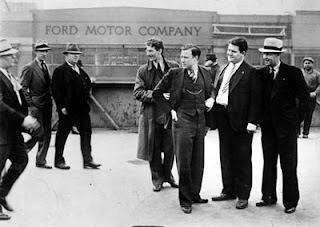 This is an argument that has gone on and on and on. I'm always shocked when I see how many workers have bought into the lie that unions will destroy our society. One brief memory of the past couple of decades, one look at the sorry state of employment today should be enough to convince even the harshest critics and the densest of dolts that the Chamber of Commerce, NAM, and every other group or politician who spends considerable amounts of time pretending that unions are evil are not now, and never have been, our BFFs.