The Myth of the 2nd Amendment: Shoot the damn thing already! 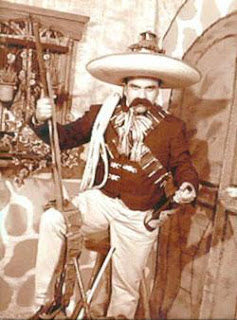 system for tracking gun sales, crafted over the years to avoid infringements on Second Amendment rights, makes it difficult to spot suspicious trends quickly and to identify people buying for smugglers, law enforcement officials say. As a result, in some states along the Southwest border where firearms are lightly regulated, gun smugglers can evade detection for months or years. In Texas, New Mexico and Arizona, dealers can sell an unlimited number of rifles to anyone with a driver’s license and a clean criminal record without reporting the sales to the government.
James C. McKinley, JR - NYT 4/14/09
_________________________________


We are a country of laws. When you look around you, it's obvious that that's not an overstatement. Everywhere we go, we're expected to follow the law.

When we cross the street, we can't cross on a red light. It's against the law.

We can't cross that street, even with the light, naked as a jay bird. It's against the law.

We can't take an orange off of the vendor's stand, no matter how juicy that orange or how out there for the taking it appears to be. It's against the law.

We can't get in our car and drive it without first understanding the rules of the road, and then obtaining licenses for both the car and the driver. It's against the law.

In each of those instances, our rights and privileges haven't been infringed by the laws that affect them. We understand that laws are necessary to maintain a sane society. We live with laws every day of our lives.

So why the hell has this entire country been hornswoggled into believing that we can own, shoot and sell guns (that's GUNS--"shoot your eye out" at the least, lethal weapons always and eternally) without licensing or regulation?

What kind of NRA wizardry has taken hold when it comes to any logical restrictions on guns? How have we come to this, where we, once again, turn a blind eye to what's in our best interests and let gun nuts, of all people, hold us in their sway?

Yes, gun nuts. I live in the north woods, where guns and gun people are everywhere. Many if not most of the hunters we know are members of the NRA. In our day-to-day dealings they seem perfectly normal, but I can't get past the growing evidence that anyone who supports and defends the right to own guns without licensing or regulations has gone beyond nutty.

The gun people we know aren't "nuts" in the sense that they're out there picketing with signs saying "Obama, don't take our guns away". They're not that dumb. But sooner or later, in order for us to survive as a civilized society, they're going to have to give up following the NRA like little lost lambs and begin thinking for themselves.

The National Rifle Association, with their blind devotion to a lawless gun culture, has become the enemy as surely as if they were standing on our borders passing out heavy artillery to anyone with cash in hand. Their members--millions strong--are constantly, incessantly, being bombarded with dangerous faulty logic. They defend the supposed Second Amendment "right" to bear arms without feeling any accompanying obligation to defend the rights of the society in which they live.

As enraging as the New York Times article ("The U.S Stymied as Guns Flow to Mexican Cartels") was this morning, I can't say it was either enlightening or even startling. Everything in it has been out there before. But it is disheartening. How many times do these same outrageous, wholly un-American facts have to be reported before we finally say, "Enough"?

Consider this from the NYT article:

Federal agents say about 90 percent of the 12,000 pistols and rifles the Mexican authorities recovered from drug dealers last year and asked to be traced came from dealers in the United States, most of them in Texas and Arizona.
The Mexican foreign minister, Patricia Espinosa, in talking with reporters recently, accused the United States of violating its international treaty obligations by allowing guns to flow into the hands of organized crime groups in Mexico.
But law enforcement officials on this side of the border say the legal hurdles to making cases against smugglers remain high.
“Guns are legal to possess in this country,” said William J. Hoover, the assistant director for operations of the federal firearms agency. “If you stop me between the dealer and the border, I am still legal, because I can possess those guns.”

Fine. "Possess" the damn guns. But regulate them, for God's sake! License the hell out of them. Keep records on who owns them, who sells them, who buys them. Make new laws, make them stick, and throw the bastards in jail if they violate those laws.

And if all that happens--guess what? Nobody's rights will be violated. Lawful gun folks will get to keep their weapons. Fun will be had by all.

We can't keep ignoring the effects of our ridiculously lax gun laws. Here's a snip from another NYT story by McKinley, entitled "U.S. is Arms Bazaar for Mexican Cartels", published on February 26:
Drug gangs seek out guns in the United States because the gun-control laws are far tougher in Mexico. Mexican civilians must get approval from the military to buy guns and they cannot own large-caliber rifles or high-powered pistols, which are considered military weapons.

The ease with which Mr. Iknadosian [owner of X-Caliber Guns in Phoenix] and two other men transported weapons to Mexico over a two-year period illustrates just how difficult it is to stop the illicit trade, law enforcement officials here say.
The gun laws in the United States allow the sale of multiple military-style rifles to American citizens without reporting the sales to the government, and the Mexicans search relatively few cars and trucks going south across their border.
What is more, the sheer volume of licensed dealers — more than 6,600 along the border alone, many of them operating out of their houses — makes policing them a tall order. Currently the A.T.F. has about 200 agents assigned to the task.

It's not just the Mexican drug cartels who are finding it easy to get guns in the U.S, thanks to the NRA. This is from a California Progress Report article by Bill Cavala on unregulated gun shows in Nevada: 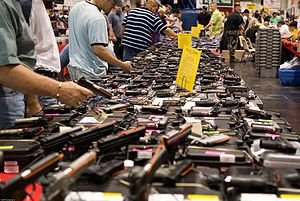 70% of the dealers at the Nevada gun shows lacked Federal Firearms licenses.
Nevada does not require background checks or that records be kept on private party sales at gun shows – unlike California.

At least two dozen “straw” purchases – firearms bought by one person but intended for another “prohibited” purchaser – were observed.

California lawmakers – aware of this problem – moved to regulate its gun shows several years ago.
But in States like Nevada, the N.R.A. has been successful in blocking similar efforts. The result is that criminals evade California gun shows to make their purchases where the N.R.A. actions protect them.
(Bill Cavala was a professor at U.C Berkeley in the 1970s, and has been actively involved in progressive politics every since. Take a minute to read the comments at the end of his article. The gun nut vultures are constantly out there circling and attacking any effort to "infringe" their phony rights. All that energy, all that stupidity. Leave it to them to use it to undermine our citizen rights of protection against the gun nuts.)

So when will this craziness end? When is a gun nut more than just a nut? Who will make the NRA see the light? What has happened to our America? How many more articles have to be written before we Americans get up in arms--so to speak?