A Most Sublime Presidency: What If Amy Klobuchar Should Win? 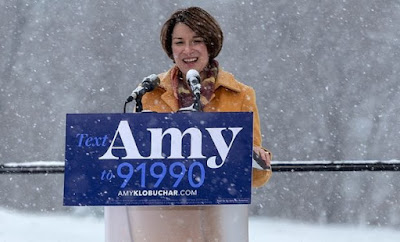 I’ll start this off by saying though I’m leaning toward someone who isn’t Amy Klobuchar, I’m not endorsing anyone for the 2020 presidential election yet. It’s way too early for me. But I’ve been watching Sen. Klobuchar and what I’m seeing is a compassionate, pragmatic Midwesterner wearing her decency on her sleeve.

She’s quiet-spoken and without guile. She’s uncomfortable bragging about her own accomplishments but doesn’t hesitate to share her resumé when it’s necessary to remind people of her bona fides. She lurks and waits and then pounces with surprisingly tough precision whenever she sees an opening. She’s a force. Not a tornado, but a steady wind driving us toward safety.

I like her. I really, really like her. I like many of the other candidates, too, but Klobuchar eases my heart. I relax when she speaks. I calm down. I hear what she’s saying and I can picture her in the Oval Office, sitting at the Resolute desk, speaking the plain truth with ease and clarity.

She’s funny the way Barack Obama is funny. Her sense of humor doesn’t lean toward snark. If she uses it to skewer she wraps it in velvet first. I could be comfortable with Amy in the White House, and right now comfort is not a word that readily comes up in politics.

I know, even as I write this, that there will be pushback to what I’m saying here. Someone will dig up a quote or an action that will attempt to prove me wrong. So here — I’ll save them the trouble on this one point: I didn’t like what she did to Al Franken. He was her Senate colleague in Minnesota and she knew him as well as anybody, but, when the time came, she joined the others and urged him to “do the right thing” and resign.

Her rush to tell him to resign was infuriating, considering they were supposed friends, and considering his entire female staff came to his defense. I didn’t think I would ever forgive her for that. But I have. She made me forgive her. She has that ability.

So, yes, I could see Amy Klobuchar as the antidote to Donald Trump. She is everything he is not. But how would she be with foreign policy? With the Republicans who won’t be happy when Donald loses? With the aggrieved Trumpsters who will see her as a weak woman they can easily topple? With the fake churchies who thought they were on their way to a theocracy, if not the rapture?

She’d be just fine. She would surround herself with experts and with people who care about this country’s mental and physical health as much as we all do. She would recruit the best of the best and she would listen. She wouldn’t embarrass us in her trips abroad and she would NEVER shove another world leader out of the way in order to get up front. (Not that any of the others would, either. They wouldn’t.)

But don’t let her Minnesota Nice fool you. She was a prosecutor once. She grew up blue collar tough.Her staff says she can be fearsome. She’s been known to make some of them cry. (Okay, I’m not okay with that. Just so you know.) But there’s something about her that says, “Don’t worry. I’ve got this. We’re going to be okay.”

Look, I’m tired. We’re all tired. And this is just thinking out loud — maybe this is what we’re going to need after the madness. But who knows? By the time you read this she may have already dropped out. She’s not all that high on the Popular list. Here’s all I’m saying: With Klobuchar there would be no unnecessary drama. It wouldn’t get personal. Chaos would give in to calm. She’s steady. As a rock. She’s forthright. She would hold us together. When this Trump thing is finally over she would work at healing us. I might even sleep the whole night through. That would be nice.

(Cross-posted at Medium/Indelible Ink.)
Posted by Ramona Grigg at 7:23:00 PM