Hanging On To Our Independence on the Fourth Of July 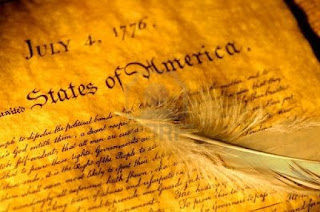 This year, 2018, has been a trying one, but I don't have to tell you. This Independence Day feels like the last of the best for the country I love and have called home for 80 years. It's hard for me to celebrate when I'm in a constant rage over the barbarism the Trump regime inflicts on us hour by hour, day by day.

Their particular form of gleeful inhumanity (See Jon Stewart) is a desecration of all we honor and hold dear in this country--and it's only getting worse.

They want to erase all we've accomplished and start all over again, turning our attempts at democracy into a toxic combination of oligarchy, theocracy, and kleptocracy by establishing what must look to the outside world like a stunningly insane kakistocracy.

It's not going to happen.

We have a long history of resistance to tyranny, and this is the day we've set aside to recognize our independence and our self-worth. Until now, we've never had a president who so hated all we stand for he spent hours of each day in the White House sending messages meant to demean and insult citizens and leaders of the country he is supposed to lead.  Never.

When we declared our independence from England in 1776, we sent a message of defiance to a certain king who, uncannily, sought to force us into the same kind of submission Donald Trump is working to do today.

It reads in  part:

The history of the present King of Great Britain is a history of repeated injuries and usurpations, all having in direct object the establishment of an absolute Tyranny over these States. To prove this, let Facts be submitted to a candid world.

He has refused his Assent to Laws, the most wholesome and necessary for the public good.

He has forbidden his Governors to pass Laws of immediate and pressing importance, unless suspended in their operation till his Assent should be obtained; and when so suspended, he has utterly neglected to attend to them.

He has refused to pass other Laws for the accommodation of large districts of people, unless those people would relinquish the right of Representation in the Legislature, a right inestimable to them and formidable to tyrants only.

He has called together legislative bodies at places unusual, uncomfortable, and distant from the depository of their public Records, for the sole purpose of fatiguing them into compliance with his measures.

He has dissolved Representative Houses repeatedly, for opposing with manly firmness his invasions on the rights of the people.

He has refused for a long time, after such dissolutions, to cause others to be elected; whereby the Legislative powers, incapable of Annihilation, have returned to the People at large for their exercise; the State remaining in the mean time exposed to all the dangers of invasion from without, and convulsions within.

He has endeavoured to prevent the population of these States; for that purpose obstructing the Laws for Naturalization of Foreigners; refusing to pass others to encourage their migrations hither, and raising the conditions of new Appropriations of Lands.

He has obstructed the Administration of Justice, by refusing his Assent to Laws for establishing Judiciary powers.

He has made Judges dependent on his Will alone, for the tenure of their offices, and the amount and payment of their salaries.

He has erected a multitude of New Offices, and sent hither swarms of Officers to harrass our people, and eat out their substance.

He has combined with others to subject us to a jurisdiction foreign to our constitution, and unacknowledged by our laws; giving his Assent to their Acts of pretended Legislation:

For cutting off our Trade with all parts of the world:

For imposing Taxes on us without our Consent:

For depriving us in many cases, of the benefits of Trial by Jury:

For taking away our Charters, abolishing our most valuable Laws, and altering fundamentally the Forms of our Governments:

For suspending our own Legislatures, and declaring themselves invested with power to legislate for us in all cases whatsoever.

He has abdicated Government here, by declaring us out of his Protection and waging War against us.


It's almost as if Trump and his enablers took these parts of our Declaration to mean this is how it should be done.  It's not the first time they've gotten the workings of our government wrong.

So on this July Fourth, let's mark this day the day we gain our independence from Donald Trump and his kind--the day we say "no more".

We've been through this before; we can do it again.