So once again I have to apologize for being away after I said I wasn't going away. I went away.  But I wasn't gone. I settled in at Facebook and Twitter, talking short, saving my energies for some real stuff.

So now I'm tussling with what some laughingly call "chemo brain", but even I can see that Donald J. Trump has brought himself around to some heavy shit.  It's as if the whole world is watching, horrified, and all Trump is willing to acknowledge is he's the supreme-top-dog-celebrity-du-jour holding the golden Get Out Of Jail Free card.  Tralalala and fiddle-de-dee. (I'm the President! Can you believe it?) 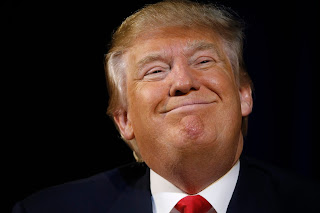 Lots to cover, but it won't come from me. I can't keep up, let alone make sense of it.  But today a memo surfaced wherein James Comey,  famously canned FBI Director, wrote at the time and for the record that Donald Trump asked him to lay off on an on-going investigation of reluctantly canned National Security Advisor Michael Flynn.  That's a big no-no, but Teflon Don lets this stuff slide off of him.  Lucky for us, those we count on are attempting to stay sane. Things are unraveling, unhinging, getting rather, shall we say, nuts.

And, oh, the foaming! Just today!

What??  That's obstruction of justice! No, it's not! Where's the memo? Why now? Was the convo taped? Nothing to see here. Get those damned leakers!

In that same memo, Comey says Trump started the conversation by telling him he should be throwing reporters who leak classified information in jail.  That was the softball.  Then Trump asked Comey ever so nicely if he couldn't see his way to just let Flynn go.  "He's a good guy", sez Trump.  "Yes, he's a good guy," sez Comey.

I should be reporting now on what Comey said to Trump but here's the thing: I'm not finding it.  Did he wriggle, did he waffle, did he pretend he didn't hear?  Did he grunt and shrug his big shoulders?  DID HE SAY ANYTHING??

But I just want to say, Go Democrats! I mean it. GO. The ball is in your court. You're in the catbird seat. (Feels good, huh?) You can do this!  Stay calm, get the facts, don't follow dead ends, eyes on the prize. Don't back down. Don't even think about all those other times you thought you had him but you didn't.  Beat the bushes for any Republican wiping tears or rending garments. Bring them into the fold. Don't even hint you're judging the hell out of them. Grab every Independent.  Be nice.