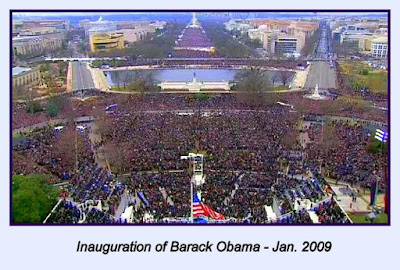 It saddens me to have to write this, but today marks the end of Barack Obama's eight-year term as president of the United States. (You'll forgive me if I don't mention what else is going on today.)

It also marks the eighth anniversary of this blog, Ramona's Voices. I started it in 2009, during the afternoon of Obama's first inauguration. I'd been playing with the idea of  launching a political blog for months before I actually did, but I had no idea when I woke up that morning that some time during the day an idea for a blog would come to me.

I began taking notes and at some point the notes began to look like a blog post.  This wasn't my first blog so I knew how to set up Blogspot and buy a domain name.  I called it "Ramona's Voices", first because it was getting late and I couldn't think of anything else, but second because I knew I couldn't carry an entire political blog all by myself and so would be relying on pulling in quotes and links from people who actually knew what they were talking about and could put words together in ways that looked pretty good.

It was Obama's energy, his promise of hope, his call for citizen duty. It set millions of us on a path we thought would surely pull us out of the muck left behind by the previous administration. In some ways it did, but the disappointments built up early: Obama's cabinet choices leaned toward Wall Street and more of the same. The Democrats held the House and the Senate for two full years and squandered their power by capitulating to Republican demands and ignoring the rising threat of outside influences like the Tea Party, the NRA, and the Religious Right.

Looking back at my blog posts over the years, I see I wasn't especially tough on either Obama or the Democrats. I'm okay with that. There were plenty of other writers who relished going on the attack against everything they did. I chose to see them as family members who needed some guidance, a push, a nudge, a smack upside the head.

That wasn't always popular, and I admit there were times I was too easy on them, but I chose, instead, to concentrate on the Republicans--something I sorely wish the press had done more often. I saw the Democrats as the good guys--and still do. I saw the Republicans as a scourge against humanity--and still do. I had no idea how bad they could get, and now the proof is before us:  Donald J. Trump, a purported billionaire with a penchant for lying, for cheating, for vendettas, a man with no knowledge of the workings of government and no interest in learning, a man who sees the highest office in the land not as the ultimate in public service but as the ultimate in power, is about to become our 45th president.

I'll miss President Obama, but until recently I had no feel for exactly how much. At some point during the last few months Obama's star power changed from shine to dazzle. His appearances drew breathless crowds. His speeches rose to such oratorical heights he left us cheering while dripping with tears. Did he change, finally becoming the leader we thought we were getting eight years ago, or is the contrast between President Obama and the prospect of a President Donald Trump so stark he couldn't help but come out the better man?

I think, during this past year and especially after that shocking November loss, Barack Obama woke up to the fact that millions of people across the country still lived in fear and desperation. His dream, it seemed, had all but died. Whether is was racism, classism, or the years of lies and ruthless interference, the job did not get done. It wasn't that he didn't try--it wasn't that he hadn't pushed for equity and unity and economic stability--it's that he didn't push hard enough, and the demagogic rise of Donald Trump, the most unlikely, unlikable presidential candidate in our history, proved it.

I'm not suggesting the Republicans had no blame in all of this. In fact, much of the blame falls on them. Wages remain low, social programs have been gutted, health insurance has descended into chaos, and our middle class is still far behind--mainly because of them. So how did they win? They won by promising to fix it all--all that they have broken will now be fixed--by them.  They talk a good game, they play on fears, they push the right buttons, they lie, cheat, and gerrymander. They win.

Obama made mistakes. He didn't seem to understand the need for economic populism, he ignored the plight of unions, he did nothing about off-shoring and outsourcing, he advocated for unpopular trade agreements, he pushed a flawed health care system that often caused more problems than it solved. In that sense, he may have opened the door to demagoguery.

Still, Barack Obama's presidency was not in any realm a failure, and may even be a greater success than we even realize. It may not have lived up to its promise, but I doubt any presidency does. His ideas, if not bold, were positive and honorable. He worked hard, he brought us eight scandal-free years, he gained respect throughout the world.  He was forced to work with the most adversarial congress in modern history. From the start they announced there would be no bipartisan teamwork. Their mission was to thwart him at every turn and they didn't disappoint.

To the president's credit, he was never vindictive, never appeared bitter. He believes in hope. He believes we can do this. What role he'll play now as a private citizen is anybody's guess, but he'll be with us. His voice will be heard. He's a man who believes in tradition and in obligation and in country. He may no longer be president but his presidential mantle will forever be with him.  We can count on that.

So thank you for your years of service, Mr. President, and for your amazing grace.