When Hillary Cracks the Ultimate Glass Ceiling, For Some of Us It’s Personal 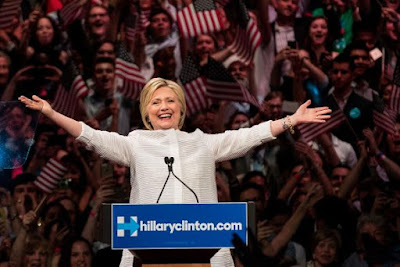 On June 7, 2016, after a hard-fought landmark election, Hillary Clinton became the presumptive Democratic presidential nominee. She's the first woman in the history of the United States to even come close to that pinnacle. It only took 227 years to crack that thickest of glass ceilings. (She'll have actually broken it when she wins.)

If the goal in the coming days is to try and diminish this triumph, you'll fast realize how many of us are in the vanguard, protecting and supporting this woman, this former First Lady, this former Senator from New York, this former Secretary of State, this mother, this grandmother, this perennial choice for most disliked, distrusted famous American who still has the confidence and the audacity to run for president, not once but twice.

And here I'll get personal. I can't speak for the millions like myself who have faith that she'll make a damn good president, but my reasons make sense to me.

I was born in 1937, the year after FDR was re-elected to his second term. My mother was 19 years old when she gave birth and I’m told it was no hardship for her to have to give up her five-year career as a housemaid in order to take care of me. Her eighth grade graduation marked the end of her schooling, and no amount of begging would change her father's mind. It was time for her to go to work, and employment for a 14-year-old girl in the 1930’s was limited in the main to cleaning houses. When she married my father at 17 any ambitions, any dreams she might have had were stuffed into a quiet place, nearly forgotten.

I was the same age, 19, when I gave birth to my first child in 1957. I had no ambitions beyond being a wife and a mother, no illusions about where my life would take me. It would take me where my husband led me. It's true that I could not buy property without my husband as co-signer, could not get a credit card unless he agreed and signed for it, had to sign my name as Mrs. His Name, but I didn't feel stifled, I was not unhappy. It was the life I chose. It was the way it was.

Other women were not so lucky, and, as oblivious as I seemed to be about barriers to my own latent potential, I was acutely aware of the struggles, the burdens of so many other women, both inside and outside my circle.

The smart ones struggled to become educated, and then, once they'd climbed that hurdle, struggled to be able to use their talents to build meaningful careers.

The talented ones, the clever ones, the eccentrics, struggled to bring meaning to a natural creativity bursting to be free, to be recognized, to be celebrated.

The meek ones struggled to get through the day with their bodies and souls intact.

And then, in 1963, Betty Friedan wrote "The Feminine Mystique". It was, to put it mildly, an awakening. I hadn't realized until then that I was asleep, too. I can't say I became a full-fledged member of the Feminist Movement, but I sat up and took notice. I was a charter subscriber to Ms Magazine, paying for my subscription even before the first issue came out.

No woman came out of that mid-20th century era without scars. Some were deeper than others, but none of us escaped the efforts to dismiss us, to demean us, to turn us into children or dehumanized objects.

By the time the movement came along, I was a housewife and a mother, struggling like everyone else to make sure the month didn't end before the money, but I wasn't so wrapped up in my own life that I wasn’t fully aware of the reasons for a revolutionary feminist uprising.  I wasn’t in need of liberation, but millions of other women were. I couldn't turn my back on them.

We went through the first few years struggling to explain the need to be liberated, to be treated fairly, to be seen, and a few more decades of outwardly insisting. It should be obvious to everyone that we're not there yet. Which brings me to Hillary Clinton.

During the 2008 presidential election, I supported Barack Obama over Hillary. My initial image of Hillary was as the embattled First Lady who messed up our chances at universal health care, and as the woman who said she would never just stand by her man like Tammy Wynette, but then, when Bill’s philandering became a reason for impeachment, she did. I had heard enough about her to believe she wasn't trustworthy, she wasn't real, she wasn't ready or fit to be president. I barely remember the arguments for her. I vividly remember the arguments against her. They’re the same arguments we're seeing this time, updated to include her time as Secretary of State, adding another seven years' worth of grievances.

When I saw she was planning another run for the presidency I wondered what the hell was wrong with that woman. Only a flipping masochist would want to be put through that wringer again.

I thought I would be supporting Bernie Sanders. His ideas were much closer to mine. He seemed far more heroic, our idealistic Don Quixote, our everyman, one of us. His message,"We're mad as hell and we're not going to take it anymore", struck the exact right notes after so many years of near-stagnation. But I couldn't get Hillary out of my mind. Her reasons for running had to be more than raging ambition, more than the ultimate power trip, more than a golden opportunity for payback.

Then I watched the Benghazi marathon, the interrogation set up solely to once and for all humiliate and bring down this exasperating, uppity woman. I watched the entire 11 hours, banging away on my laptop, searching out the truth, the real truth, about Hillary. How did I not know she was a feminist? How did I not know of her work with women and children all over the world? I saw that much of the work she did for so many of us went unsung. She was all about the work and not all about the glory. She took the slings and arrows and flung them aside. She never let them get in her way.

Even before the hearing was over I knew I would support her and not look back. It took a few days before I was ready to admit it in public, but I did it, to the dismay of some who thought I couldn’t possibly be serious. And to others who saw me as a turncoat, a traitor, a goddamned vagina.

We tend to forget that Hillary Clinton is a consummate politician. She thinks like a politician, she acts and reacts like a politician, she eats, breathes and sleeps in the midst of politics. She is not perfect, she has made big mistakes, she’s not always nice. She’s not like you and me. She has spent her entire adult life working toward this moment and now she’s at the door, working to push it open, wanting to see that ceiling come crashing down. And I’m right behind her, wanting to see it, too. She’s not the only one who’s been waiting a lifetime for this.
Posted by Ramona Grigg at 7:58:00 PM