The Nothingness of Donald Trump 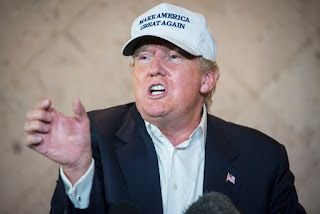 This will be short.  My eyes, dammit, are still bothering me, but not nearly as much as Donald Trump bothers me.  I HATE writing about Donald Trump, adding to the list of people who make him deliriously happy whenever we mention his name, but he hit a new low the other day, even for him, when he went after Hillary Clinton's aide, Huma Abedin, and then went after Hillary's aide's husband.

Abedin (Or "Ooma" as Donald calls her), as everybody knows, is the wife of former congressman Anthony Weiner. ("Did you know that?" Trump shouted to his audience, "Did you know that?")  So after insulting both Hillary Clinton and Huma Abedin with unsubstantiated claims of underhanded collusion to hide some emails produced on an in-home server, he decided it would be a real crowd-pleaser to go after "Ooma's" husband, too.

Well, yes.  It was.  The crowd went wild!  During that speech and over the next couple of days he accused Abedin of giving national secrets to her husband, who, according to Trump, is a "perv", "psychologically disturbed" and "one of the great sleazebags of our time."  (Weiner's "crime", I don't have to tell you, was to tweet a couple of lewd pictures to women who weren't his wife.  Naughty, naughty, to be sure, but a perv?)

Trump has a masterful way of suggesting something bad is going on without having to prove it.  When he talked about the Mexicans coming over the border who were rapists and murderers, he added, "And some of them are good people, I'm sure."  As if, in the middle of his sentence, his brain finally engaged and balked a little, giving him the means to soften what he just said without having to take any of it back.

When he said McCain was only a war hero because he was captured and he, Trump, didn't like people who were captured, his brain must have been asleep at the time, forcing him, as often happens, to go it alone.  Later, when he knew he had to backtrack, he said, lamely, "I'm sure McCain is a hero."  There.  All done.

So when he took to talking about Hillary's emails, and Huma Abedine's role in what's turning out to be another Clinton non-scandal, it was, again, a masterful demonstration of speechifying without really saying anything:


"So how can she be married to this guy who's got these major problems? She's getting her most important information, it could be, in the world. Who knows what he's going to do with it? Forget about her. What she did is a very dangerous thing for this country, and probably it's a criminal act."

Well, of course, the press went nuts, as it usually does whenever they latch onto non-stories as juicy as this one.  They went after Trump, practically begging him to keep it up:


Washington (CNN) Donald Trump on Saturday stood by his charge that disgraced former Rep. Anthony Weiner is a "perv," adding that he "obviously is psychologically disturbed" and alleging that his wife, Huma Abedin, a top adviser to Hillary Clinton, is passing sensitive information to him."I think it's a very fair statement that I made and a lot of people have congratulated me," Trump said after an event in Nashville, Tennessee. "(Abedin) is receiving this very, very important information and giving it to Hillary. Well, who else is she giving it to? Her husband has serious problems, and on top of that, he now works for a public relations firm. So how can she be married to this guy who's got these major problems?"

You know what's sleazy?  A man like Donald Trump having so little respect for our American system of government that he would use his guise as candidate for the presidency to spread his laughable malarkey, to push his one agenda, his own self-aggrandizement; to mock and insult anybody who isn't fawning over him and who dares to get in his way as he moves toward what he wants when he wants it.

You know what's perverted?  The notion that a man like Donald Trump could be considered for the job of President of the United States.  Right now, as I write this, he polls at the top of the Republican contenders.  He's a panderer who hasn't given an honest thought to the needs of the citizens of this country EVER.  He's a man who admits he'll do anything to get a deal.  He's a ruthless businessman who prides himself on not knowing anything about politics or foreign policy and sees that as a plus for his side.

He's a flim-flam man and proud of it.  A flim-flam man whose only cause is to keep his popularity going.  He's running for president of the United States and at least some of our citizens are hoping they'll get the chance to vote for him.  If you ask them why, they'll repeat the phrase embroidered on Trump's trademarked baseball cap:  To Make America Great Again.

Such is the state of our nation.


(For the record, I have written about Anthony Weiner here and here, and about Huma Abedin here.)