GUEST POST: A Face of Homelessness - The Ignored Face of America

The post below was written by my internet friend and fellow writer, syrbal-labrys.  She posted it on her own blog, Experiential Pagan, about a month ago but I only just discovered it last week.  I asked her if I could re-post it here and she graciously agreed.
We talk about the homeless a lot, but most often as distant observers who can only imagine what it must be like.  This is a story of an encounter and a rescue, with an ending as elusive as the reasons why: 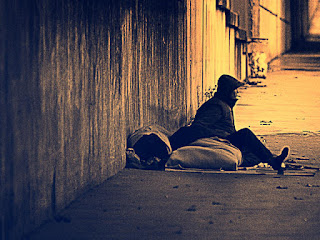 August 8, 2015 by syrbal-labrys
I’ve been distracted this week.  My mind has wandered, as if lost, through a combination of fiction, memory, and reality in a particularly disturbing way.
I re-read a favorite piece of fiction: “Dune” — a pivotal bit of sci-fi and social fantasy for me.  The idea of a feudal society has always appalled me, you see?  And yet, as the rich gather the reins of power as well as the bulk of the income and property in America, that sort of image could well be the future of America. (And I cannot stop seeing Donald Trump as a Baron Harkonnen wanna-be.) What a horrific ending of America’s experiment as a democratic republic.
This last week, out on a shopping/errand trip, I saw a young man standing on a street corner with an unreadably small cardboard sign.  The only cash I had was a $20 bill, so we summoned him to the car window and handed it to him since he had an air of utter misery and desperation about him.  His reaction was one of shock and near tears.  This disturbed me even more.  We went about the rest of our business.  Three hours later, coming back – he still stood there, of course.
And something in me broke.  I asked my husband to pull over and fetch him.  We asked him if it would help to work for us for a couple weeks (all I could pay for by robbing a small savings account) with a place to sleep and food.  He was overcome, and (I think) frightened – I mean, we could be any sort of crazy predators, couldn’t we?  But he met us the next morning, hunched with cold after a night with no protection from the temperature drop from the high 80’s into the low 50’s.
With my broken ankle and the Minotaur’s knee surgery, there were many summer tasks and projects languishing.  So we put him to work, paying him and driving him back to town to give the bulk of the money to his mate and child.  They, too, are technically homeless and back at home with her parents, who seem angry and rather resentful about it.  But it is likely just because their own resources are so stretched to thin tolerances.  She has a job and is trying to save for an apartment.  A minimum of sustainability is all but out of their collective reach.
Knowing that the tiny extent of our attempt to aid him was a couple weeks of safe sleep, meals and a few hundred dollars makes me feel crushingly inadequate.  There is very little help for the homeless in our very red county.  He can be arrested for begging, or for sleeping on public property.  He is criminal merely for being homeless and poor.  He lives on energy drinks and candy bars, taking the bulk of whatever money he gets to his mate and child.
He has a work history, he has job skills; but with no drivers license and no address it is difficult to get and keep a job.  He lost his driver’s license due to lacking money for insurance  – once ticketed for driving without insurance and not being able to pay the ticket (back in his teens) meant his driver’s license was suspended.  Then, caught driving without a valid license — tickets, fees, and such accrued out of any possibly remedy.  It is beyond MY power to resolve, certainly.
He is in desperate need of dental work and although he has the state insurance that should pay for that?  No local dentist or oral surgeon accepts that insurance.  That is a ‘what-the-fuck’ Catch-22 right there, is it not?  The only oral surgeon who could resolve his constant pain is in Bremerton — a two if not three hour commute away.  There is NO bus service out here, so he cannot even try to get there in that way.
He has been homeless off and on since his teens, he dropped out of school one year short of graduating because his meth-addicted mother kicked him out and he worked full time to support himself.  He really never got a half decent chance at life, and now every system is full of catches where even doing it all as right as he can is not sufficient.  He has friends on the streets, some sleep in cars or trucks they own.  Some run from repo men to keep their wheeled “homes”.  Some are veterans.  They park in shopping center lots to sleep, hoping to not be arrested.
This is a face of America.  The face everyone seems to turn away from seeing.  The GOP call such people shiftless and lazy.  That has not been my experience of them.  I see desperation and hopelessness.  I see hard, hard work for very little in the most part.  I am furious and heartbroken that I can do so little to help.  It can be no coincidence in my mind that the first homeless folk I saw were in Washington D.C. while Ronald Reagan was President, can it?  I had to try explaining to my children why men were sleeping on benches in the park opposite the White House, in December.  So that memory replays as I see the young man I brought home to rest.

I saw him sleep on my sofa his first morning here after a full meal.  I told him not to be afraid, we are not religious nuts who will pull the “rice Christian” bit on him; I promised he was safe to rest.  He slept with the abandonment of utter exhaustion; even the dogs did not bark at him — they know hurt and broken when they see it.   He now sleeps in the Honey House, where he can lock a door temporarily his own to feel secure.
I want to “Be the change you want to see in the world” –– I really do.  But oh, that change needs more than what one retired couple can provide. We make sure our two veteran sons, who subsist on disability or minimum wage jobs, are not homeless.  It stretches us, keeps us from feeling financially rowdy.  It keeps us careful and cautious.  But I cannot avoid other faces I see — faces that mirror what could have become of my own sons, if the Minotaur and I had not held ourselves and our marriage and home together.
I can no longer look and do nothing, even though the little I can do is surely too little.  And I am angry and heartbroken.  The electioneering is gearing up.  Whatever gods may or may not be better protect any imbecilic Republican saying stupid things about the poor and homeless within MY earshot.  Because, I tell you, there could be blood.  And oh-so-not from Megyn Kelly’s “nose“! (And yes, just let me say, fuck Donald Trump with a dozen flaming pineapples.)
_______________________

And then. . .
He left about a week after he arrived.  Labrys contacted his girlfriend, who has heard from him only once.  She is afraid he has lapsed into addiction.  Meth.
So now they wait. . .