Thank You, Maya Angelou, for Your Magical Words. And for Being You.

We got word that Maya Angelou died today.  When her picture flashed on the TV this morning I held my breath, hoping it wasn't bad news.  When they announced that she was gone, I shouldn't have been shocked, considering her age (86) and ill health, but it took me a few minutes because it never occurred to me that she might someday leave this earth. 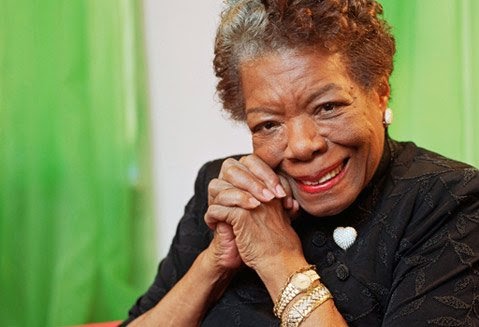 Hers was a presence so strong troubles fell by the wayside when she spoke. For me, it was as if she drew me to her breast and comforted me.  Her voice, her words, her delivery--slow, drawn out, emphatic, often impish--gave her the kind of authority that stripped cliche out of her message of love and kindness and acceptance.

She overcame and transcended a horrific early life that might have broken a woman without her capacity to overcome.  Her strength came in forgiveness--of herself and of her tormentors.  Childhood trauma and abuse rendered her mute for five years, from five and a half until she was almost 13.  She was a single mother at age 16.  Hers should have been a story of unfulfilled dreams; a life made ordinary by her own circumstance.

But she found art as her great release and, remarkably,  discovered an innate and glorious ability to communicate.  She was a singer of songs, a poet, a teller of stories, and as a Civil Rights activist she put those talents to use.  Her breakout came from her brutally honest and beautifully written memoir, "I Know Why The Caged Bird Sings".  Millions of women everywhere fell in love with her and never let go.  And she never let us down.

She supported us, mentored us, showed us how it could be done.  Because of her we wanted to be writers; we wanted to be activists; we wanted to right the wrongs and change the world. She did it with laughter and joy, with love and kindness, with acceptance of our weaknesses and frailties, with a voice that might have been silenced forever but gained strength, took wing, and flew with the angels.

She was some woman.

Still I rise
by Maya Angelou

You may write me down in history
With your bitter, twisted lies,
You may tread me in the very dirt
But still, like dust, I'll rise.

Does my sassiness upset you?
Why are you beset with gloom?
'Cause I walk like I've got oil wells
Pumping in my living room.

Did you want to see me broken?
Bowed head and lowered eyes?
Shoulders falling down like teardrops.
Weakened by my soulful cries.

Does my haughtiness offend you?
Don't you take it awful hard
'Cause I laugh like I've got gold mines
Diggin' in my own back yard.

Does my sexiness upset you?
Does it come as a surprise
That I dance like I've got diamonds
At the meeting of my thighs?

Out of the huts of history's shame
I rise
Up from a past that's rooted in pain
I rise
I'm a black ocean, leaping and wide,
Welling and swelling I bear in the tide.
Leaving behind nights of terror and fear
I rise
Into a daybreak that's wondrously clear
I rise
Bringing the gifts that my ancestors gave,
I am the dream and the hope of the slave.
I rise
I rise
I rise.