A Flag Is What We Make It

In the 21st century controversy over the legitimacy of the 19th century Confederate battle flag, one question remains unanswered:  What does it mean to those who want to fly it?

The answer:  Anything they want it to mean. 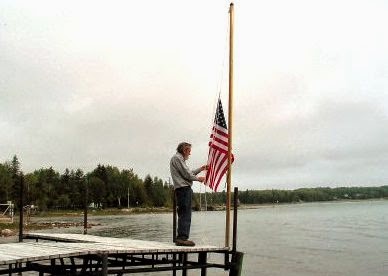 When we run our American flag up the flagpole at our house, it means we love the idea behind it, we love the look of the stars and stripes; we love how it waves in the breeze, telling us the wind direction, giving us an indication of the velocity.  (A perk, I know.)

We believe the stories about Betsy Ross and the Star Spangled Banner.  We love the image of the flag-raising over Iwo Jima.  We pledge allegiance to our flag whenever the occasion arises. (Without endorsing the wholly unnecessary Red Scare defense "under God", it should be said.)

My husband the Marine will not allow the flag to touch the ground and replaces it with a new one when it begins to look tattered.

But there are other Americans who use that same flag to make some pretty awful points.  Hate groups bent on destroying the present government use it as a backdrop for photo ops. 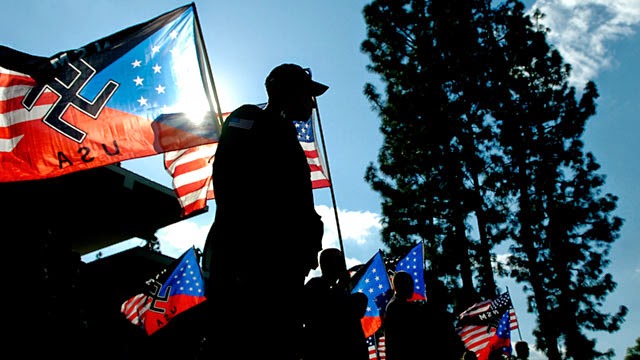 Cliven Bundy uses it to try and save his ranch after refusing to pay his government lease for more than 20 years, 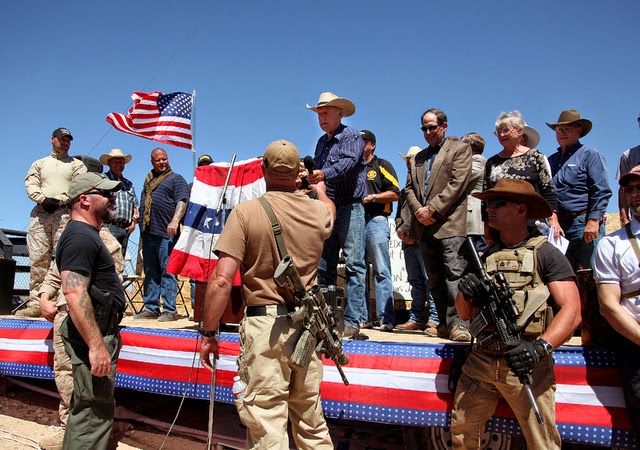 enlisting militiamen hostile to the government to protect him from eviction. 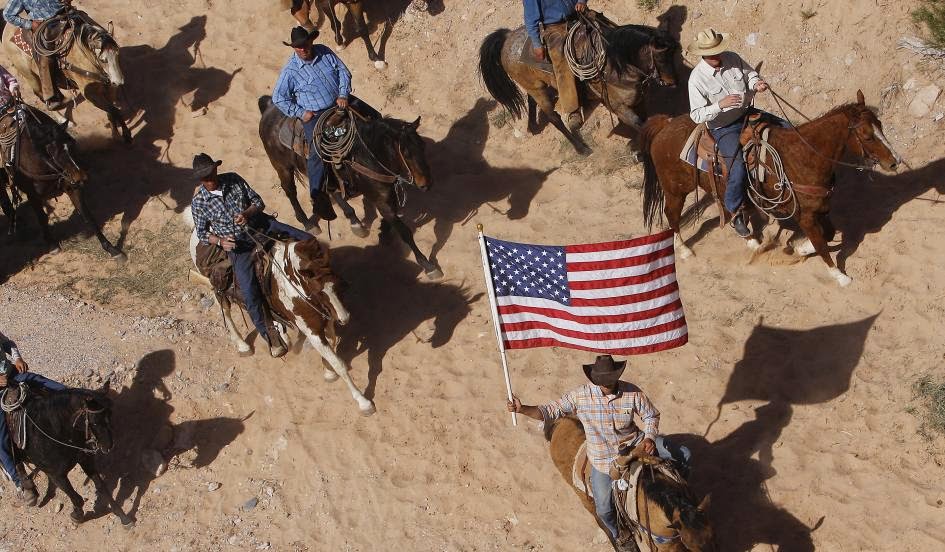 The American flag is a symbol for every American, but, as symbols go, the symbolism is in the eye of the beholder. 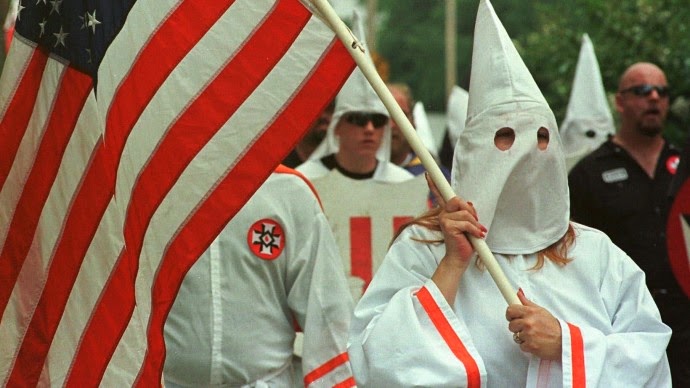 Is it offensive?  Is it racist?  It can be, and to some it ever will be.  Vile racism is, at the very least, inappropriate, and if a historic flag is co-opted to endorse hate, it wouldn't be the first time. 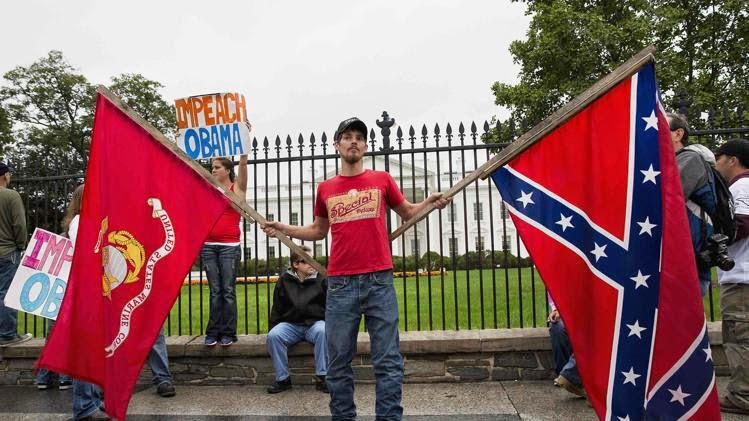 For many years we've spent our winters in South Carolina.  The confederate flag is everywhere and, as a Northerner indoctrinated in the offensive nature of what we called the Rebel flag, I found each instance shocking.  But their heritage, I came to realize, is not my history, and nowhere am I more aware of it than when I wander through an old Southern cemetery. 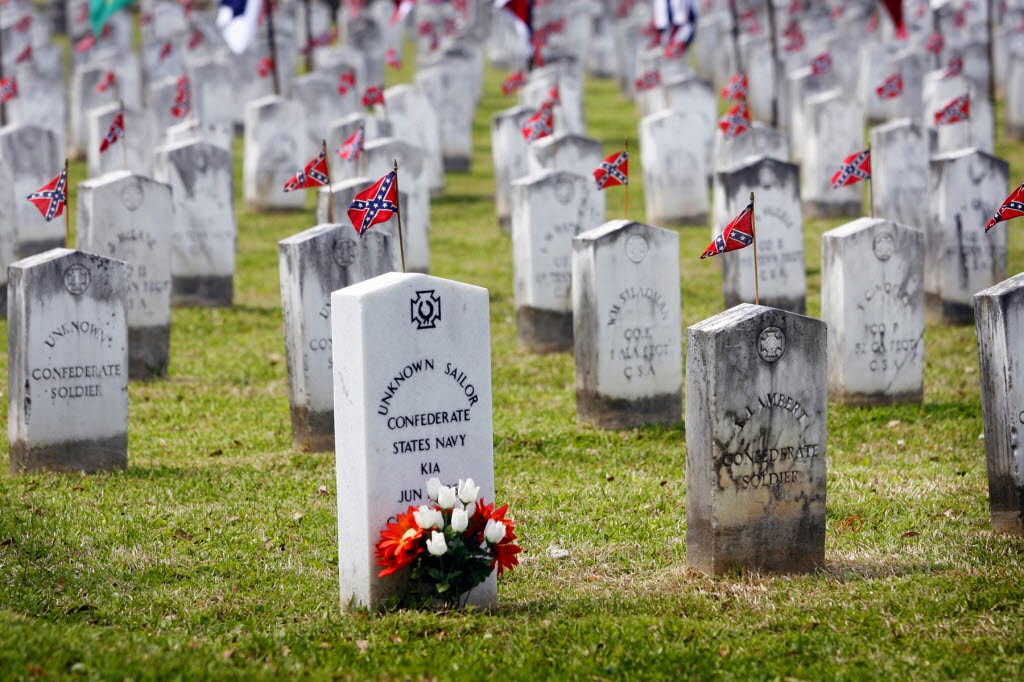 These are their ancestors.  Hundreds of thousands of their countrymen died fighting for a cause they may or may not have even understood.  Were those young men--often just boys--fighting to ensure that wealthy plantation owners could keep their slave labor?  Doubtful.  More likely they saw themselves as freedom fighters making sacrifices in order to save their homes and form their own union.  They fought in a terrible civil war and their side lost.  Because real people in real families were affected forever, this is not a part of their history the modern South is willing to forget.  And we as a nation have no right to ask it of them.

At different times in our history, parts of our country belonged to the English, the Spanish, the French.  We fought them and won, and we still fly their flags in remembrance.  It's a part of our history.

The South once fought to belong to the Confederacy.  They had their own flag.  How can we recognize that part of our history without recognizing their flag?   The answer is, we can't.  And the truth is, we shouldn't.