Goodwill Misses the Meaning of Good Will

When 19-year-old Andrew Anderson started working at the Goodwill store in East Naples, Florida, he thought his job was pretty cool. He was working in a place where poor and low-income people came to buy the things they couldn't afford anywhere else.

Andrew worked at Goodwill for three weeks and from his place behind the counter he saw people come on bicycles with, as he said, "wearing all the clothes they had, with two, three dollars, max."  It was his job to collect the money for the goods they purchased.  When he saw the poorest of the poor coming through his line he began discounting whatever the item cost. He loved the smiles he got from the folks who saw their bills cut in half.  He thought nothing of it and didn't really want thanks.  He saw it as paying it forward.

His bosses saw it another way.  They fired him for stealing from the company, even though he never took a thing for himself and later offered to make up the difference himself.  They weren't amused.  They had him arrested.

"I wasn't actually stealing. Goodwill is a giving and helping company, so I took it upon to myself to be giving and helping because I feel people deserve it," Anderson said.
But the teenager quickly went from paying it forward to the Collier County jail.
"My heart just dropped into my stomach," Anderson said.
Store officials fired Anderson and reported the incident to deputies. They arrested him Tuesday and charged him with grand theft.
The statute for grand theft reads, "Theft -- Appropriate the property to his or her own use or to the use of any person not entitled to the use of the property." - Per Collier County Sheriff's Office
Anderson says he never knew giving discounts was wrong or even illegal.
"The intent I had was to help people, just like Goodwill says, we help people," Anderson said.

Well, up to a point, Andrew, and only on their terms:

"Our stores are not around to give a hand out, they're around to give people a hand up by providing funding, said Kirstin O'Donnell, a spokesperson for Goodwill Retail and Donation Center in East Naples.
"In incidents like this, we always prosecute and the reason why is when people steal from Goodwill, they're not stealing from the company, they're stealing from the mission of our organization."

Well, sure, Andrew shouldn't have taken it upon himself to give discounts at the thrift store, but couldn't his bosses have just taken him aside and told him that?  Did they really have to fire him?  Who wouldn't want such a good kid working for them?
And really? They had him arrested??
I'm trying to picture the scene at the station house, when poor Andrew is hauled in there and made to admit he did what he did.  I'm seeing a "Barney Miller" segment, where Wojo is doing the grilling.  Andrew tells his story and even before he's finished Wojo is wiping away the tears.  Uh oh..  Wojo barricades himself and Andrew in Barney's office, and we know there is no way this kid is going to jail. 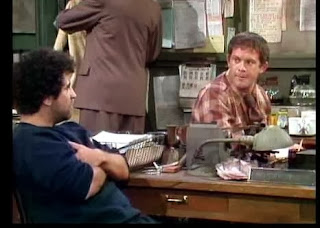 I'm waiting for Goodwill to do a mea culpa.  We were wrong, people!  While we don't condone what Andrew did, we did a poor job of explaining how this thing works.  It was an honest mistake!  Come back!  We're good people!  We're Goodwill!
Andrew says now, "My heart was in the right place, my head was in the wrong place."
Your head and your heart are just fine, Andrew.  And I predict once Wojo springs you and this is over, there will be employers waiting in line, begging you to come to work for them.   Everyone should be so lucky.

A Goodwill store in Naples, Fla., reversed course today and decided to drop grand theft charges against a teen employee who had given discounts to poor customers.
The decision came four days after the store had fired Andrew Anderson, 19, and had him arrested for granting discounts that totaled $4,000. As recently as today, the store defended its actions saying the money could have been better used on Goodwill’s other charitable projects.

Really, Goodwill?  That $4,000 could have been better used on Goodwill's other charitable projects?  Do you know how much the big guys upstairs make?


[Goodwill International CEO Jim] Gibbons' salary and deferred compensation amounted to $729,000 in 2011, the CEO of Goodwill Industries of Southern California got $1.1 million and the Portland, Oregon top executive received more than $500,000, NBC reported.

And don't think I didn't notice in that same article that Goodwill had to 'fess up to paying a disabled worker 3 cents an hour in 2008--all legal, of course.

But Hooray for Andrew Anderson.  That's what good will looks like.