Politicians out of control on Guns: Never Forgive, Never Forget

Yesterday 46 members of the Senate voted down a proposal that would have been a logical first step to gun control--universal background checks.  They were able to vote it down, even though 54 members voted for it because they rigged the way the votes count now.  Voting it down for no good reason is bad enough but they did it through cowardice, lies and cheats. The whole process was despicable, made even more so by the fact that it happened in the chambers where expectations of fairness and fidelity used to run quite high.

These public servants ignored the wishes of at least 90% of Americans and caved, instead, to willful profit-oriented special interests.  They lied about the content of the bill and insured their success by forcing a 60-vote approval instead of a fairer, more honest majority vote.

In a sane world, this would be enough to cause those who voted against the wishes of the people some actual discomfort, if not some actual punishment.  Our outrage (those of us who have sense enough to be outraged) comes today because we know nothing will happen to them.  They will go on for another day and another day after that making bad decisions that will affect all of us in one way or another, and all we can do is shout about it. 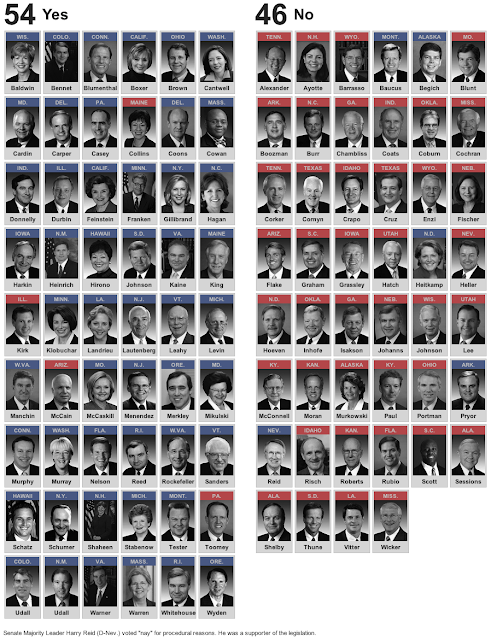 They get away with these undemocratic actions once again because we have neither the authority nor the strength to stop them.  And they know this.

The president gave a masterful speech yesterday, designed to both clarify his rage and to shame them for their actions.  They don't care.

A portion of what the president said:


Families that know unspeakable grief summoned the courage to petition their elected leaders –- not just to honor the memory of their children, but to protect the lives of all our children.  And a few minutes ago, a minority in the United States Senate decided it wasn’t worth it.  They blocked common-sense gun reforms even while these families looked on from the Senate gallery.

By now, it’s well known that 90 percent of the American people support universal background checks that make it harder for a dangerous person to buy a gun.  We’re talking about convicted felons, people convicted of domestic violence, people with a severe mental illness.  Ninety percent of Americans support that idea.  Most Americans think that’s already the law.

And a few minutes ago, 90 percent of Democrats in the Senate just voted for that idea.  But it’s not going to happen because 90 percent of Republicans in the Senate just voted against that idea.
A majority of senators voted “yes” to protecting more of our citizens with smarter background checks.  But by this continuing distortion of Senate rules, a minority was able to block it from moving forward.

Gabrielle Giffords wrote an impassioned editorial in the New York Times yesterday, designed to show her rage and to shame those senators.  They don't care.


Some of the senators who voted against the background-check amendments have met with grieving parents whose children were murdered at Sandy Hook, in Newtown. Some of the senators who voted no have also looked into my eyes as I talked about my experience being shot in the head at point-blank range in suburban Tucson two years ago, and expressed sympathy for the 18 other people shot besides me, 6 of whom died. These senators have heard from their constituents — who polls show overwhelmingly favored expanding background checks. And still these senators decided to do nothing. Shame on them.


James Fallows wrote a great piece in the Atlantic yesterday called "For the Love of God, just call it a Filibuster".    They don't care.

The Twitterverse clogged the place yesterday listing one by one the names of those senators who voted "no".  They don't care.

Journalists, essayists, bloggers, and hundreds of thousands of enraged activists took to their preferred soapboxes and shouted out in anguished rage.  The senators ignored us all.  They don't care.

They're counting on our inattention, our tendency to be distracted and manipulated, our refusal to believe our elected politicians could turn against us so cruelly, so blatantly, and so often.

This is our chance to show them how much we care.  We can't forget.  We must not forgive.  We will not let them get away with this latest insult.  They should not be allowed to win again.  Not if we are who we think we are.