Forcing Religion in Public Schools is not Frowned on in Mississippi. I'm Shocked.

So one day somebody at Northwest Rankin High School in Flowood, Mississippi came up with the idea to hold a series of mandatory Christian assemblies, where students would be required to watch a Christian video and listen to ministers (and fellow students) from the Pinelake Baptist Church preach to them about the importance of being a Christian.

Now, it isn't so much that someone in a public taxpayer-funded secular school came up with the idea--off-the-wall ideas are everywhere. It's that so many others thought the idea was a good one.  They thought it was such a good idea, in fact, that part of the plan was to station teachers and parents at the doors so that no kid could escape leave.  When some of the students tried to leave, according to the complaint, Officer White, the truancy officer, "harassed them and told them to sit down".  When some of them tried to go from their classrooms to the library instead, Officer White was on it.  They were herded to the assembly.

The complaint says that over the three assemblies there were anywhere from 20 to 30 staff members in attendance, along with anywhere from five to 10 of the student church representatives' parents. So, in essence, (no, in fact) the kids in that public school were forced to listen to the preaching of a particular brand of a particular religion, and--get this--nobody in charge thought there was anything wrong with that.

Finally, one of the kids taped a portion of the assembly and it found its way to the American Humanist Association.  Now it's a First Amendment issue, along with another chance at embarrassing a heretofore oblivious sorry mess of an American state--futile as that might be.

Some of us will be shaking our heads over this, tsk tsking all over the place, but who wants to bet nothing much will happen here?  At most, they'll have to agree to stop holding Christian assemblies and that will give them a chance to scream about freedom of religion.  We'll be seeing those posters and tee shirts where God is sad about not being allowed in schools, and anybody who sees what happened at Northwest Rankin High School as a bad thing will be reminded that the lesson is an innocent one about Jesus' love so who but a liberal commie atheist would complain about that? 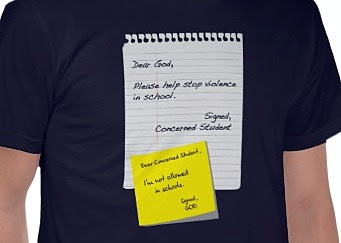 Well, I would.  And I did.  And I will.  Because it isn't about God, it's about religion.  And because forcing any religion in public schools is frowned on in a country where freedoms are supposed to be cherished.  All across this free country laws upholding fundamentalist Christian values are being written in states where those groups have gained a foothold.  They're re-interpreting the constitution to read that while no national religion can be established, it's perfectly okay for states to have some wiggle room regarding somebody's idea of faith-based values.

You might have seen that North Carolina was in the news last week over a state religion proposal by a couple of Tea Party legislators.  It was quashed the next day but there's something just weird about a headline that reads, "North Carolina Won't Establish State Religion."  (Alrighty then.  Next?)

Apparently there's nothing mandatory about elected or even school officials being made to understand the reasons why certain clauses in our particular constitution came to be.

We should probably work on fixing that.
Posted by Ramona Grigg at 7:35:00 AM