Will the Real Bob Woodward Please Sit Down?

Once there was a young Washington Post reporter named Bob Woodward who became a celebrity almost overnight by joining with another reporter named Carl Bernstein (remember him?) to expose the inner workings of a penny ante break-in at the Democratic Headquarters at the Watergate office complex in Washington. D.C.

The Woodward/Bernstein team, aided by WP editor Ben Bradlee and publisher Katherine Graham (along with several unsung on-the-ground reporters), wrote a series of powerful exposes, thrilling and galvanizing an entire nation, opening our eyes to the widespread corruption, collusion and obstruction in the Nixon Administration.  That seemingly inconsequential 1972 burglary grew into a major scandal involving and eventually bringing down a sitting president of the United States.  (Nixon resigned the office of the presidency on August 9, 1974.)

Woodward and Bernstein won a Pulitzer Prize for their reporting and then went on to write the first of two books about their experiences. The book was entitled, "All the President's Men"  and it became an instant bestseller. (Their second book together, "The Final Days", recounted Nixon's last months in office.)

As if those accolades weren't heady enough for a young reporter like Woodward, the crowning glory came in the form of a gorgeous famous actor named Robert Redford, who portrayed him in the highly acclaimed Academy Award-winning movie based on their book.

That was Bob Woodward way back then.  Shift to this week, when the real Bob Woodward is busy trying to disentangle himself from a claim he made that the White House threatened him!  Threatened Bob Woodward!  When all Bob Woodward was doing was attempting to expose President Obama's "lies about the sequester". (Was the sequester the president's idea, or not?  Bob says it was.  Huge.)

When Woodward discussed his upcoming column with a "very senior White House aide" (no secret any more, it was National Economic Council Director Gene Sperling) both on the phone and through subsequent emails (where Sperling actually apologized to Woodward for coming on too strong), the seasoned reporter came away from them believing, he said, that he had been threatened.

As much as the real Bob Woodward wanted to convince the rest of us that he's so important he's still getting threats from the White House, he couldn't get around the fact that the emails are out there and we've seen them.

This is what Woodward told Jonathan Karl at ABC News: 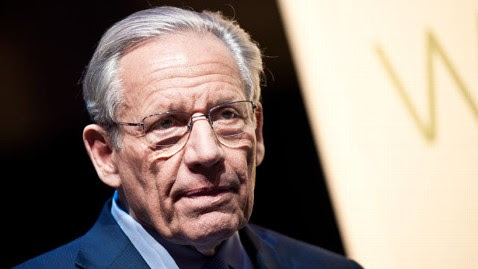 Washington Post reporter Bob Woodward has shared with ABC News his email exchange with the White House official who told him he would “regret” his reporting on the sequester.  That official was Gene Sperling, the director of President Obama’s National Economic Council.

Woodward tells me that Sperling’s words – “as a friend, I think you will regret staking out that claim” – was an implied threat because, Woodward says, the White House was not really disputing the facts.

“It’s just not the way to operate,” Woodward told me, saying Sperling’s implied message was, “You challenge us, you will regret it.”

Why did he respond to Sperling’s email so politely?  He was trying to keep open the lines of communication.

“They don’t have to talk to anybody,” Woodward said.


That was yesterday.  Today, Woodward says he never said he was threatened. (That's all, folks.  Nothing to see here.  Move along.)

But we're talking about Bob Woodward here.  Attention must be paid.

Rush Limbaugh starts a program this way and then moves on from there:


I don't know, folks.  I don't know.  I'm just not sure that what we're dealing with here is a "you're gonna have a dead horse in your bed tomorrow morning" kind of threat.  I don't think that's what we're dealing with.  I do think the White House is gonna take care of Woodward with a death panel down the road.  That's how they're gonna deal with this.  We'll never know.  Woodward's gonna get sick and the death panel will come in there and that will be that.

Fox News and the Right Wing media have a field day.  Because he's Bob Woodward and. . .attention must be paid.

This isn't the first time that Woodward has either outright lied or exaggerated in order to make himself more important.  The stories about his inaccuracies are out there in great enough numbers to show that, in fact, attention has been paid. And then forgotten.

Perhaps the most egregious (and easily disproved) outright self-aggrandizing lie was the one he told about the supposed deathbed confession of former CIA director William Casey, as told to Woodward and spelled out in great detail in his 1987 book, "Veil".

Six years ago, Jack Kelly brought it up again in an article for the Pittsburgh Post-Gazette:

That Mr. Casey had suffered a stroke which deprived him of the power of speech.

That Mr. Casey's room at Georgetown University hospital was guarded 24/7 by CIA security personnel, who likely would have noticed if Mr. Woodward had attempted to sneak in.

That Mr. Casey's wife, Sophia, said that either she or their daughter, Bernadette Smith, were constantly at Mr. Casey's bedside, and likely would have noticed Mr. Woodward if he had been there. "We had our food brought up there," Mrs. Casey told Time magazine. "There was a lavatory there. We never had to go out of the room."

That intimates said Mr. Casey despised Bob Woodward, and that he would be the last person on earth to whom Mr. Casey would grant a deathbed interview.

One of the skeptics, Michael Ledeen, was contacted by Ted Koppel, who was going to have Mr. Woodward on ABC's "Nightline" program, and was soliciting suggestions for questions he should ask.
"Ask him to describe the room," Mr. Ledeen said he told Mr. Koppel. "What was Casey wearing? Were there lots of flowers? What color were his pajamas?"

Mr. Koppel did ask those questions, and, Mr. Ledeen said, "Woodward froze, deer-in-headlights. Then he said he couldn't discuss it because it would 'reveal sources.' "

That was over a quarter of a century ago, and still life goes on for Bob Woodward--as if it's All Watergate All the Time and nothing he has done to blacken his name since then has caused even a smudge.

Jonathan Cohn over at the Atlantic, while making light fun of Woodward's "I was threatened" claim, along with showing us how wrong Woodward got the whole "sequester" thing, still says, "Woodward remains one of the best fact-gatherers in the business."

Anybody who has watched Woodward in action over the years can't possibly still believe he walks on water, but what he has going for him, what keeps him up there on top, is that magical name.  Bob Woodward.  It's like a cloak of invisibility for him.  It renders him omnipotent, even in the face of so much evidence to the contrary.
He basks in his Watergate glory because the truth is, we really hate to see our idols fall. We have so few journalistic idols anymore, we especially can't stand the thought of a protector of the people turning into a pompous prick.


So once again Bob Woodward not only makes the story, he is the story.  And as much as I hate that kind of stuff,  I'm doing it, too.  I'm giving Woodward what he wants.  Attention.  Attention.  Everlasting attention.

3/13/13 - I've been trying to quit this thing but more and more about BW keeps coming out.  Tanner Colbey, co-author of the 2004 book, Belushi, a Biography, (under Judy Belushi's byline) writes in Slate about the inconsistencies he found while going over Woodward's 1984 book on Belushi (Wired) as part of his research.
The bottom line:  The humorless Bob Woodward wrote a humorless dissertation concentrating on John Belushi's drug habit and eccentricities without ever considering his genius as a comedian or his history as a human being.  He made up and/or altered conversations, forgetting that the people involved are still living and still sentient.  They protested after his book came out, but it became a bestseller anyway.  (Why am I not surprised?)


(Cross-posted, as always, at dagblog)