Every year around this time Republicans get to let their hair down and show the world that no matter what we've heard otherwise, they do have a silly side.

Doom and gloom and global warming is our problem, not theirs.  Enough about the poor, the pregnant, and the pressures put on them by the peons.  Get those party hats on!

Tomorrow the three-day celebration of hedonism, corporatism, and puritanism known as the Conservative Political Action Conference (CPAC) begins.  This is the 40th such event and you have to hand it to them--each year they outdo themselves.  I mean, holy cow!  What a line-up! 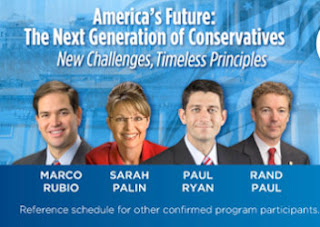 But, wait. . .no Limbaugh?  No Beck? No Coulter?  No Eastwood?  It appears that way. They're not on the list.  Steven Crowder "Fox News's Brightest, Funniest Conservative Mind" will be there, and isn't afraid to call himself a comedian.  There are others who will be giving him a run for his money, however:  Donald Trump and Allen West will be there.  So will Sarah Palin and Rick Perry.  So will Newt Gingrich and Bobby Jindal.  And Rand Paul and Mitt Romney.  And Ted Cruz. (Dick Morris will be there,too, talking on "The Making of America: The Substance and Meaning of the Constitution", but apparently he doesn't photograph well.  They left him off the front page.)

For good measure, the NRA will be represented by both Wayne LaPierre and David Keene.

Theprogram for these three days (March 14-16) reads like a thriller, what with war and conspiracies and scary Obama and what-not.  Amazing what they can find to talk about.  And--no way!--Paul Begala and Tucker Carlson are scheduled to go mano-a-mano, Crossfire-style. (And you thought nobody cared anymore.)


It'll cost you, that CPAC.  And there's a dress code, so don't be trying to get in there in just any old thing:

Well, come on, you obviously can't wear strapless necklines during the daytime activities (We're talking to you, Paul Ryan), but Walmart wear?  Leggings or pants? ("If struggling with this decision, don't pack the items in question.  Neither jeans nor leggings are appropriate for the official conference.")

Lots of fun after-conference stuff, too.  Here's a can't miss:  "The Walking Dead, Obama Zombies on Parade" bash on Friday night.  (They're gonna dress up like zombies, and everything.  There's a message in there someplace, but I'm not one of them so I'm not privy to it.  Sorry.)

I've written about previous CPAC conferences here, and here.  They're addicting, I admit.  I can't promise I won't be writing about it again this week, but for now I'm having enough fun just anticipating what's going to happen this year.  (Don't disappoint me, Republicans--I've looked forward to this for a whole year.  And you owe me, you rascally rascals.)