On this Second Inauguration: Our Chance to Hope Again

Monday, January 21, 2013 - 7 AM:
As I'm about to begin the fifth year of my blog on this morning of Barack Obama's second Inauguration (held on the anniversary of Martin Luther King's birth, a most appropriate and fitting confluence), I feel I should write something so powerful, so moving, so wise, nothing anyone ever writes about this day will even come close.

But anyone who regularly reads my blog knows that's probably not going to happen.  What I plan to do on this most auspicious day is to record the small stuff and leave the big stuff to the writerly biggies.  This will be a happy post, since this is a happy day for me.  (If even reading those few words sends the heat rising to the top of your head and you're threatening to blow, well, buh bye.  We'll talk again some time.)

I can barely conjure up how I felt on the day of Obama's first Inauguration, but I can go back and read that first blog post and there it is.  I can go back to the second and the third and the fourth anniversaries of that big day as well to see how I felt each time it rolled around.

And today, after more than a year of much wringing of hands, going between high hilarity (the Republican presidential candidates, one and all) to My God, Romney/Ryan could win and ruin everything, my president, Barack Obama, is about to re-enact the official swearing-in as the next and current president of the United States. (Re-enacted because January 20 fell on a Sunday this year and apparently we're not allowed to inaugurate on the Sabbath. But the president has to be sworn in on January 20, no matter what, so Chief Justice Roberts did the honors yesterday in a private ceremony (except for the cameras) and today it's being repeated at the Big HooHaw, anti-climactic as it might seem to the purists--who probably aren't going to be pleased about anything today, anyway.)

And, of course, there's Joe Biden--the icing on the cake.  Four more years of Joe--could I get more giddy?

11:50 AM.  Barack Obama has just taken the oath of office again and now he is giving his inaugural address. 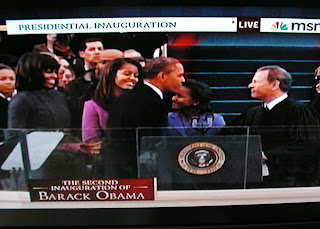 And again, as Richard Blanco reads his splendid poem, "One Today".

And Beyonce sings the National Anthem. . .

(Okay, before you ask. . .I, the professed heathen, have no real problem with invocations and benedictions at government functions.  I may not understand the necessity, but I'm pretty sure a couple of simple prayers is not going to be enough to turn the government theocratic. )

And after an hour or so, it's done.  We have a president (and a vice president) for four more years.  In my case, I have the president (and the vice president) I wanted to have, but because we have elections that aren't completely off the wall there are some people who can't say that.  I've been there before and now I'm not. That means I'm happier than they are today, but never fear--if I live long enough, they will have their turn.  (Not that they'll deserve it, damn them.  Smiley face) 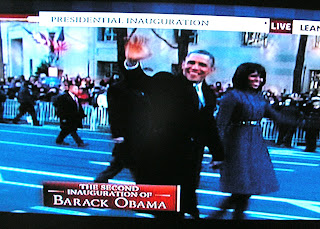 3:55 PM.  The president and the First Lady have made their stroll down Pennsylvania Avenue and are now back in their limousine, and I have to admit, I'm relieved.  I've never seen so many Secret Service agents in one place.  I'm sure there were sharpshooters stationed up on the roofs.  (I wish it weren't so, but in these times, with this president, we have reason to worry.)

We'll have four more years to debate the good and the bad of this presidency.  Time enough to start it up in the days to come.  I reserve today for celebration.  And tomorrow and tomorrow.


(Cross-posted at Dagblog, as always)