Hillary Clinton takes those mugs on and wins! (So what's new?)

So yesterday was the day Hillary Clinton finally testified on the Benghazi tragedy at hearings in both the House and the Senate.  The Republicans have been after her for months now to get it done, but things happened, including Influenza and her fall and subsequent hospitalization for a concussion in late December. (A clear stall, wicked lady. Hmmpph!)

No surprise, was it, that if the Republicans pushed that hard to get her on the stand, it would be theater less like Shakespeare's Globe and more like Gonzo Gaiety.  Satisfying, isn't it, that they didn't disappoint?

I don't know about you, but they far exceeded my expectations.  Those rascals did what they set out to do and the results were pretty much as predicted (by some of us.  Yea, verily, most of us).  Hillary the Indomitable chewed them up and spit them out, one by one.  I watched in horrified awe as they each entered the arena--impatient, it seemed, to become her next victim.  What were they thinking?

Kentucky's whippersnapper-in-residence, Rand Paul, probably couldn't know that lecturing in slow-drawl ("I'm glad that you're accepting responsibility. I think ultimately with your leaving that you accept the culpability for the worst tragedy since 9/11. And I really mean that"), was about as effective as my then-six-year-old assuming some sense of superiority by shouting, "I hate you!" 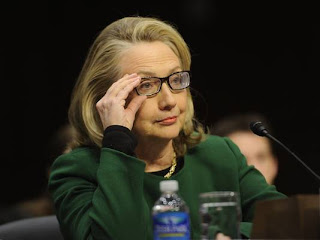 He must not have been looking at Hillary when he said it, because, already oblivious to his own sense of proportion when it comes to tragedies (Really, Randy? 'The worst tragedy since 9/11'?? Let's just look.), he went on:  "Had I been president and found you did not read the cables from Benghazi and from Ambassador Stevens, I would have relieved you of your post. I think it's inexcusable."

Well, now, sonny, you'd best get hold of yourself.  "Inexcusable" is a mighty strong word.  It's been known to come back 'round and bite a busy body in the ass.

Ron Johnson, Republican senator from Wisconsin, harped on and on about the initial protest reports until Hillary forcefully reminded him, "With all due respect, the fact is we had four dead Americans. Was it because of a protest or was it because of guys out for a walk that night who decided to kill some Americans? What difference at this point does it make? It is our job to figure out what happened and do everything we can to prevent it from ever happening again, Senator."

(Johnson the senator later told a radio host, "It was theatrics.  She didn't want to answer questions so she makes a big show of it.")

Later, John McCain tells Hillary her answers are "unsatisfactory" and then goes back to questioning why the State Department called the attacks "a protest" way back in September when it turns out they weren't.  (Note to John:  See Hillary's answer to your good friend and colleague, Ron Johnson, above. Now get outta here.)

These hearings were not set up to get answers to the Benghazi raid, they were set up to get Hillary.  Everybody inside and outside those rooms knew that--the Republicans bent on bullying her; the Democratic Greek Chorus determined to defend her, the millions of watchers hoping to see a catfight.

Everybody got what they wanted.

And in the end Hillary took the blame, told the truth and won the day.  Because she's Hillary and they're so not.

(Cross-posted at Dagblog, as always.)