The GOP Fixation on Rape and Sex and Women's Bodies: There are Cures for That. 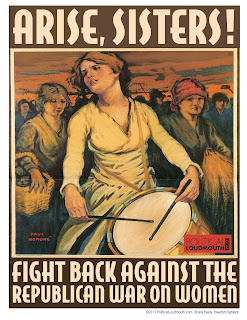 So I guess you heard what House Science Committee member Todd Akin (R-MO) said, when asked whether rape would be reason enough for abortion:


People always want to try and make that as one of those things, well, how do you, how do you slice this particularly tough sort of ethical question. It seems to me, first of all, from what I understand from doctors, that's really rare. If it's a legitimate rape, the female body has ways to try to shut that whole thing down. But let's assume that maybe that didn't work or something. You know, I think there should be some punishment, but the punishment ought to be on the rapist and not attacking the child.

To which, even the most thoughtless of the thinking people have to be going, What in thee pluperfect HELL??

This is the Tea Party-backed guy who just newly won the Republican senate primary and will go against Democratic Senator Claire McKaskill in November.  Maybe.  McKaskill wasted no time jumping in, saying, in effect, Uh uh, morons, you chose him, now you better let him run--I hope, I hope, I hope.

But her reaction was nothing compared to the scrambling, the fumbling, the hasty word salads coming out of the Republicans who, bless 'em, saw immediately how this could royally screw things up come November if people kept linking that idiot Akin to their almost-main guy, Paul Ryan.

That same Paul Ryan who calls himself the most Pro-Life person in government.

That same Paul Ryan whose views on Personhood--the belief that the life of each human being begins with fertilization--meshed so thoroughly with Todd Akin's they co-sponsored a bill calling for the legitimization of that loony theory.

That same Paul Ryan who, along with Akin and a couple hundred GOP House members, actually tried to make laws about the degrees of rape, defining "forcible rape" as the only violation worth noting--as if, in fact, "forcible" could be defined; as if, in fact, there was any other kind.

So, because Akin reminds them too much of Ryan and all that's unholy about him, the rest of the Republicans would like nothing better than to see Akin just fall in a hole, his name erased from any future historical references to the Great Race of 2012.

On Hardball, Cynthia Tucker told Chris Matthews that this notion about a woman's body protecting her from a rapist's sperm--in a 'legitimate' rape--is nothing new.  She said Georgia Representative Don Thomas, a physician, said much the same thing--in 2003.

The Atlanta Journal-Constitution's Jim Galloway quotes Thomas as saying, “Relying on my personal experience in my home county of 90,000 people, we don’t have rape cases resulting in pregnancy."

Galloway found another instance of the same crazy theory, this time by a North Carolina legislator (Republican) in 1995:


"The facts show that people who are raped -- who are truly raped -- the juices don't flow, the body functions don't work and they don't get pregnant," said [Henry] Aldridge, a 71-year-old periodontist. "Medical authorities agree that this is a rarity, if ever. . .
. . .[t]o get pregnant, it takes a little cooperation. And there ain't much cooperation in a rape," he said.


How long before Republicans finally have to admit that they've encouraged and nurtured this craziness long enough? If they get skunked in November, will they finally come to their senses?  I doubt it.  Their fixation on rape and sex and women's bodies is a powerful habit.  It won't go away overnight.

But what if the craziness continues and they don't get skunked?  What if Romney wins and the Republicans take both the House and the Senate, and Paul Ryan, entrenched as the second most powerful man in the country, comes out of his shell, no longer having to pretend that there are any circumstances where women have any rights over their own bodies?

It's our job to keep reminding potential Romney/Ryan voters that Todd Akin is not an anomaly, he is a symptom.  Five minutes before he gave that interview his loony beliefs about women's bodies were right there with him, and five minutes afterward he was feeling no pain about what he said.  He is who he is, and Paul Ryan and his fellow sex-masters are right there in the peapod with him.

There is no cure for what ails them, but there is a cure for us.