The Test of a Great Teacher (This is not a test.)

As a former student who froze at test-taking time, no matter how hard I studied and no matter how sure I was that I would ace it this time (but never did), I was horrified when "No Child Left Behind," a plan linking school funding with student testing, became the law of the land.

I no doubt learned at least a few things in school, but nobody would ever have guessed it at the time, so lousy was I at test taking.  As a result of my inevitable brain freeze on the very days when I needed it the most, my grades were awful and I spent years feeling dumber than dirt.  (There were 140 students in my high school graduating class and when I found that my grades put me in the exact middle, I was ecstatic.  Really.)

There are people--my grandson might even be one of them--who probably see testing as surefire proof that kids are learning what they're supposed to learn.  He was the exact opposite of his grandmother:  He was a gifted student who loved the challenge of tests and actually looked forward to them.  He was the kind of kid who, just for fun, would ask his grandfather to make up math problems for him to solve.  I never saw him sweat over tests.  There's something unnatural about that.  Every normal human being (except maybe "Jeopardy" contestants) hates tests.

I worked with Psych interns and residents at the University of Michigan long ago in the Way Back, around the time the University began to understand that brain-blockage at test time was a serious problem.  They recognized that many of their finest hands-on students were falling behind because of a fear of tests, so they began to offer classes in test-taking.  But here's the odd thing:  Hardly anybody, even in Psych, wanted to admit they fell short in the test-taking department, so they wouldn't enroll.  One intern did, and he was furious when the news that he was taking the class leaked out.

There is a stigma attached to failing tests of any kind.  The word "loser" hangs over the results, and if it happens often enough, the one taking the tests can't help but be marked by those failures.  But that's not to say there is no place for tests.  There's nothing wrong with testing to gauge how well a student grasps lessons (she says now), but when the emphasis is on tests and not on learning, it skews the entire process.

And now, when public schools are under constant attack by the Right, there's something more insidious going on:  Now, if test scores fall short, it's not just the fault of the students, it's the fault of the teachers and ultimately the schools. Whatever else gets done in the classroom becomes increasingly meaningless if a student can't answer questions on a test. "No Child Left Behind" has become a vehicle for downgrading public schools and the teachers who serve them in order to promote privately operated schools funded with taxpayer money, often formulated by the states to do nothing more than side-step the demands of the teachers' unions. It's the perfect weapon.  It's near impossible to teach to the test and still produce students who can broaden their learning skills outside of the classroom.  So kids fail, teachers fail, and schools--public schools with open enrollment where all can attend--fail.  And those who have been waiting for public education to keel over and die gain yet another foothold.

So when Rebecca Mieliwocki, 2012 Teacher of the Year, said this in her speech before the NEA last week, I sat up and listened:

When great teachers are asked to focus on test scores and push them to the forefront of our priority list we give kids a warped and weird education that honors neither the depth nor breadth of human knowledge, but it is an absolute turning of our backs on the uniqueness of each individual child we teach and I refuse to do that.

She went on to try and bolster the waning spirits of teachers who find themselves ready targets in the battle over public education.


It's so striking to me that in our ferocious and noble zeal to not leave even one child behind we may have accidentally left all the teachers behind instead.  If we want a transformation in education, if we truly want innovation and reform, we have got to stop talking about testing and start talking more about developing, supporting and celebrating teachers.  Teachers are the architects of the change we've been waiting for.

At that, she got a standing ovation, but remember--she was in a room full of teachers.  Outside that room there await multitudes who think every word coming out of her mouth is hogwash.  Teachers are the new pariahs.  They want to get rich off our kids and want us to pay for it.  They only go into teaching so they can get three months off in the summer.  They're dumb. They're socialists.  And they insist on belonging to unions.


In any profession there are good and bad players. Teaching is no exception.  But teaching as a whole doesn't deserve the reputation it's been getting, and our kids don't deserve the residual backlash. There's nothing subversive about developing, supporting and celebrating teachers.  There is something subversive about turning education into yet another private enterprise. 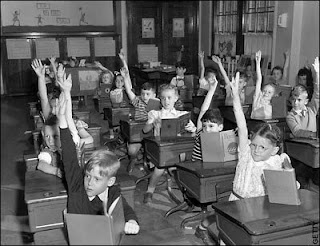 So hooray for public schools and warrior-teachers like Rebecca Mieliwocki.  Teaching our kids to think, to create, to be caring, to be bold can only come about when teachers themselves are allowed to be thoughtful, creative, caring and bold.

They know and I know and you know that can't be taught with a test.

Email ThisBlogThis!Share to TwitterShare to FacebookShare to Pinterest
Labels: 2012 Teacher of the Year, NEA, No Child Left Behind, privatizing, public education, public schools, Rebecca Mieliwocki, teaching to the test