My Country is Breaking my Heart

Nearly every morning lately I wake up feeling as though my heart is ripping out of my chest.  My loves are still my loves, my health is okay, and it looks like there's a chance my measly but adequate bank account may outlive me, so for a while there the cause of these major palpitations was a bit of a mystery.

I'm slow sometimes, I admit, but I've had my suspicions.  Now it's official:  it's my country that is breaking my heart. My country has nearly lost her mind.  She falls for any smooth-talking con man who promises eternal prosperity but who's actually reveling in finding new ways to rob her blind.   For quite a few decades there, I thought she was big enough and bold enough, with a heart strong enough (and a memory long enough) to see past the big bucks and slick facades and recognize the same old deviltry that has plagued her so often before. But it's no use pretending. She has lost her sizzle and maybe even her will to live.  She's giving up. 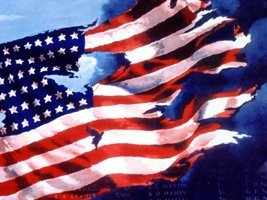 What a blow to those of us who've been desperately trying to think of ways to stop this madness.  (And what madness to think we actually could.)  We've hammered, we've hollered, we've cajoled, we've used humor when nothing was funny.  We've marched, we've sung, we've preached, we've even tried voting.  Nothing has worked.

Now a number of sovereign states have moved in for the kill and it's likely they'll be the ones big enough to put the final nails in the coffin.  Even the states you would think should know better* have been seduced  into voting against their own best interests by the big money power-mongers.  One by one, they're giving control over to "small-government" campaigners who, once in office, are enjoying the hell out of yanking off the wool they've pulled over so many eyes.  (*Read my own besieged Michigan, expected to be the first of the 50 states to turn wholly and officially private.)

Much time and energy is spent citing articles and providing links to some brilliant arguments against what's been happening to our country. (Joseph Stiglitz has a chilling rundown of the takeover in the May Vanity Fair.) But frankly, words -- even brilliant words-- can't save an entire nation.  Words can anger us and encourage us and enlighten us, but being aware is a far cry from being in charge.  Ask any prisoner or slave.

Stiglitz writes in Vanity Fair:   "Alexis de Tocqueville once described what he saw as a chief part of the peculiar genius of American society—something he called “self-interest properly understood.” The last two words were the key. Everyone possesses self-interest in a narrow sense: I want what’s good for me right now! Self-interest “properly understood” is different. It means appreciating that paying attention to everyone else’s self-interest—in other words, the common welfare—is in fact a precondition for one’s own ultimate well-being. Tocqueville was not suggesting that there was anything noble or idealistic about this outlook—in fact, he was suggesting the opposite. It was a mark of American pragmatism. Those canny Americans understood a basic fact: looking out for the other guy isn’t just good for the soul—it’s good for business."

Even 180 years ago it was wishful thinking on de Tocqueville's part. We've always had the self-interest groups among us and they've rarely been in danger of properly understanding.  They've always dreamed of taking over and running things their way. They've always tried to pretend that the "Democracy" tag doesn't exist.  But we've always had clearer heads prevailing, knocking them sideways before their power and greed got completely out of hand.  Up until now.  Now it appears their ruthless tenacity has finally paid off.

We know who they are.  They operate out in the open without fear of incarceration or retribution or even of losing the least little bit of their fortunes. They can't lose.  Their big money is safely kept far from these shores and there's nothing we can say or do that will hurt their feelings or make them think any less of themselves.  These are the people bent on forcing our country to her knees in order to line their own pockets and feel the power.  These are the people Jim Hightower describes in his must-read column:

Funded and orchestrated by such hard-core, anti-laborite billionaires like the Kochs, DeVoses, Bradleys, Scaifes, Coorses, and Waltons, the right wing has declared open season on public employees. But don't think that the assault by corporate extremists stops there. Using the GOP and the tea partiers as their political foot soldiers -- they intend to dismantle the public sphere, crush all unions, downsize the entire middle class, and banish egalitarianism as an American ideal. Ready or not, our nation has devolved into a new and nasty civil war, with moneyed elites now charging into legislatures and courts to separate their good fortunes from the working class and to establish themselves as a de facto plutocracy.

My country is breaking my heart.  What hurts the most is how easily she gave up.  I never thought I would see this once-proud nation lying in a rusted heap, bankrupt and riven and the laughingstock of the world.  I thought she was as much a fighter as the men and women who worked so long and so hard to keep her strong.  I never once thought she'd forget where she came from and let us down.
*
*
Posted by Ramona Grigg at 7:41:00 AM