The Rapture is coming tomorrow.  Tomorrow at 6 PM three percent of the citizens of the world will be swept up and deposited in what they hope will be God's loving arms.  The rest of us can look forward to five months of tribulations, until October 21, when a worldwide catastrophe will take place and we'll all be gone.

I'm pretty sure I won't be included in that three percent tomorrow.  In fact, I'm so sure I'll still be here, I bought two Powerball tickets.  The drawing is at 7 PM tomorrow night -- a full hour after the scheduled Rapture.  It's up to 92 million dollars so I'm thinking if I'm going to have to be living in tribulation for five months it would be nice if I could do it in style for a change.

It's one single source, one person -- a Christian broadcaster named Harold Camping -- who's causing all the commotion, and it might seem a little strange that we're even talking about this considering numerous past disappointments when predicted end times didn't happen (including Harold's own prediction in 1994), but Harold is sure he has it right this time.  (It's a bunch of numbers and you know how I am with numbers so go here to see how he came up with his proof positive.) 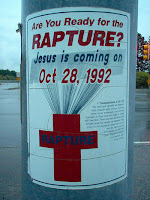 So after a few admitted miscalculations, Harold  made his latest prediction, May 21,2011, as long ago as New Year's Day, 2010. and by God he's sticking with it.  (Click on that link for an even deeper in-depth look at his calculations.)

If you're still skeptical (after those numbers?) go here for what the bible has to say about it.  (Or at least what somebody is saying the bible says about it.)

I know I've spent a lot of time on this one item, but it is the end of the world, for chrissake. (Here are the Google Images pages for the May 21 billboards.  The Christian Science Monitor says there are 5000 of them all over the world.  Now tell me it's not a big deal!)

But there is some good news for those of us left behind.  The Center for Disease Control is all over the End Times, when the horrors will finally be unleashed.  They've prepared a Zombie Apocalypse Kit. (Yes, really.  Our CDC.)

Last week Esquire published a parody about World Net Daily's publishing arm having to pull the book, Where's the Birth Certificate? The Case that Barack Obama is not Eligible to be President, authored by Jerome Corsi (co-author of "Unfit for Command", a book full of untruths about then-presidential candidate John Kerry and the swift boat incident), because, well, there's the birth certificate.

Seemed like a reasonable thing to do -- pull a book that's pretty much been proven to be a pack of lies from start to finish -- but this is the Right Wing World, and WND publisher Joseph Farah not only stands by his book, he's threatening to sue Esquire!

This from a piece in a Talking Points Memo:

Farah also said he no longer believes the title of Corsi's book, Where's the Birth Certificate?: The Case that Barack Obama is not Eligible to be President, is unfortunate because he's "100 percent certain" that the long form birth certificate released by Obama a few weeks ago is a "fraudulent, bogus document."
"We feel like Woodward and Bernstein in the early days of Watergate when nobody was reporting the story, and finally the New York Times came along," Farah said.
He said the issue over Obama's eligibility has never been limited to whether he was born in Hawaii, it's been over whether he is a "natural born citizen," which Farah contends he is not because his father wasn't an American citizen.

Right.  I loved David Neiwert's take on it over at Crooks and Liars, too.  It's here.

And the capper, the laffer (Got this first from GottaLaff over at Political Carnival)  is that the Obama 2012 campaign is making the most of it by selling "Made in the USA" tees and mugs as fundraisers.  Barack Obama's picture is on the front and his newly-released official birth certificate is printed on the back. (And how much you wanna bet they'll make more money off of this than World Net Daily will off of that totally irrelevant book of whoppers.) 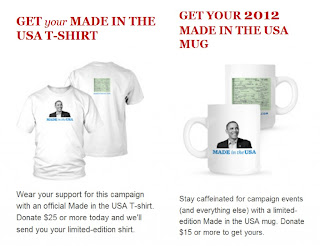 Remember the ad campaign song, "Coke, the Real Thing?".  Oh yeah, the great new group, "The Other 98 %" , did a parody called "Koch, the Evil Thing".  Inspired!  Watch and compare them both here (courtesy of GottaLaff at Political Carnival.)

Moment of Sublime:  The Library of Congress has created a National Jukebox of historic sound recordings, including more than 10,000 from Victor recorded between 1901 and 1925:  http://www.loc.gov/jukebox/

There are also voice recordings, including this from William Howard Taft (Yes, that Republican) on the rights of labor:  http://www.loc.gov/jukebox/recordings/detail/id/1480