It All Comes Down to Loyalty

For a nation that can’t stop bragging about how great and powerful it is, we’ve become shockingly helpless in the face of the many challenges confronting us. Our can-do spirit was put on hold many moons ago, and here we are now unable to defeat the Taliban, or rein in the likes of BP and the biggest banks, or stop the oil gushing furiously from the bowels of earth like a warning from Hades about the hubris and ignorance that is threatening to destroy us.    Bob Herbert, NYT, 5/31/10

Just as we saw in Wall Street's devastating economic disaster and in Massey Energy's murderous explosion inside its Upper Big Branch coal mine, the nastiness in the gulf is baring an ugly truth that We the People must finally face: We are living under de facto corporate rule that has rendered our government impotent.

Thirty years of laissez-faire, ideological nonsense (pushed upon us with a vengeance in the past decade) has transformed government into a subsidiary of corporate power. Wall Street, Massey, BP and its partners — all were allowed to become their own "regulators" and officially encouraged to put their short-term profit interests over the public interest.    Jim Hightower, Alternet, 6/2/10

There was a time when America was known for its greatness.  We were a prosperous country with an upper class that put its riches back into the American economy.  Our middle class, our vast majority, was vibrant and full of life.  Our poor were always with us, but our homeless and hungry weren't so overwhelming in numbers that our shelters and our food banks couldn't keep up.

There was a time when anyone who wanted a job could find one.  Fathers could earn enough to take care of an entire family, and mothers, if they chose, could stay home and care for them.

There was a time when we built factories on American soil and produced goods and made steel and planted crops in such abundance that we not only sustained ourselves, we were actually able to export the remainder.

There was a time when, if we could have looked ahead, we would have had enough sense to be ashamed of what we have become.

What a waste.  All that hard work, all those years of working together to build an America we could all be proud of, and look where we are.

Every day in every way I resent the hell out of the people who put us here.  I've lived through the good times and I've lived through the bad times.  I've watched as greed and selfishness and yes--disloyalty--have eroded  a workable system that had been in place since the aftermath of the Great Depression, and is now plummeting us back into a reprise of those same dark days.

Big business is running our country into the ground.  Big business doesn't care because big business is global now.  If they lose here, they'll gain somewhere else.  Big business has no shame and they have no sense of loyalty.  They live big here because they can.  They can because there are enough Americans who will watch their backs and circle the wagons whenever they think big business is being attacked.  Since the days of their most exalted hero, Ronald Reagan, capitalism at all costs has been hammered into their pointy little heads.  (Never mind that, thanks in large part to the bleatings of their most exalted hero and his most vociferous followers, a good number of their capitalist pals have taken their booty offshore and have completely abandoned ship.)

The Republicans, the Tea Partiers, PalinCorp, Fox "News", the Right Wing pundits, and certain of the DINOs are working hard to distract us from the increasingly obvious truth:  Big business has run amuck and is destroying us.

Why those people feel the need to defend those Terminators is beyond me, but they're apparently going to defend them to the death of us. The mainstream media, either by intent or shortsightedness or fear of ratings, is big into aiding and abetting the Destroyers of All Things American.  Even C-Span, the seeming last bastion of objectivity, is turning right just when we need them to stay focused.  More and more, they highlight the rightward-leaning, and seem to delight in covering everything Tea Party as if they were an actual political party and not simply an angry mob whose only solution to this mess is to pump up the anger.

Defending the status-quo encourages the undermining of our economy.  There is something decidedly ludicrous about that claim to want to "take our country back". The only ones who want to go back to that are the ones who made (and are still making) obscene bundles of cash off of our collective misery.

If they really wanted to take our country back they would be fighting against the disloyal, dishonorable corporations that chose to build factories outside America using foreign slave labor in corrupt, unregulated countries rather than  live by the necessary rules and pay decent wages and benefits.

They wouldn't be waving the American flag while chanting "Drill, baby, drill".

They wouldn't be buying into the corporate lie that all things public, including health care, Social Security and schools, should be privatized so that corporate interests can have the control and keep the profits.

They wouldn't be so bent on electing people who despise the very idea of good, all-encompassing government but wouldn't mind collecting a paycheck while they're attempting to destroy it.

If those people had any sense of loyalty toward this country, they would, instead, be climbing out of that comfy bed they've made with the worst of Big Business and think twice about railing against anyone wanting to put a stop to the most destructive, out-of-control business practices this country has seen since we let this same thing happen in the 1920s.

It all comes down to loyalty.  Do we privatize or do we keep "a government of the people, by the people, and for the people".  Every member of Congress pledges this Oath of Office:


I do solemnly swear (or affirm) that I will support and defend the Constitution of the United States against all enemies, foreign and domestic; that I will bear true faith and allegiance to the same; that I take this obligation freely, without any mental reservation or purpose of evasion; and that I will well and faithfully discharge the duties of the office on which I am about to enter: So help me God.

Every time we say the Pledge of Allegiance we pledge loyalty to these United States. 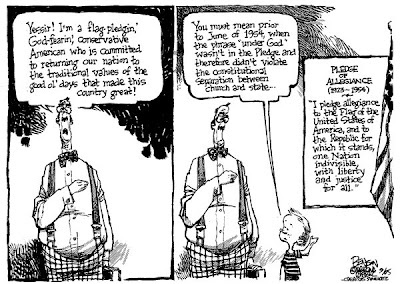 Some of us actually mean it.