The Lunatic Fringe is No Longer Amusing. Let's get Serious.

The collapse of the economy in the Great Recession gave us the starkest, most painful evidence imaginable of the failure of laissez-faire economics and the destructive force of the alliance of big business and government against the interests of ordinary Americans. Radical change was called for. (One thinks of Franklin Roosevelt raging against the “economic royalists” and asserting that “we need to correct, by drastic means if necessary, the faults in our economic system from which we now suffer.”)

But there has been no radical change, only caution and timidity and more of the same. The royalists remain triumphant and working people are absorbing blow after devastating blow.

Bob Herbert has been my favorite doom-sayer for a while now.  Every bit of doom and gloom coming off of his little portion of the paper confirms and solidifies my own feelings of the permanence of America's rack and ruin.  Together we wallow in our weariness and grief, but we don't enjoy it.  Not even a little bit.  That's about the only positive thing I can say about it.

We're also not alone by any means.  I can say that positively, too.  There are a lot of us who recognize a river of no return when we see one, and there are some of us who might even know how to turn this sorry ship around, but our voices are being drowned out by the lunatic fringe shouting crazily for another exciting ride down the rapids.

There's no getting around the fact that we're being hijacked by a loud-mouthed group of know-nothings and evil-doers.  They really, truly want to get us back to the dark days of Bush/Cheney.  They want to give what's left of what we laughingly call a "government" over to the Private Interests, making it a total surrender, and they want to make it happen now.

The crazy thing is some of them don't even know that's the plan.  They get out there and shout for Obama's head and for the destruction of all things liberal/progressive/socialist/communist/Marxist/Leninist/Rooseveltist/
Steinbeckist/MLKingist/WalterReutherist/FlorenceNightingalist/GoldenRulist and think they're doing their part to save the country!

They listen to people like Glenn Beck and Rush Limbaugh and Sarah Palin and Dick Armey (who know they're talking nutty but like reaping the rewards), and Michelle Bachmann (who apparently doesn't, but reaps anyway), gathering their assigned weapons of anger and hatred, heading out to the battleground without ever recognizing that the real enemies of the state are the generals at their backs. 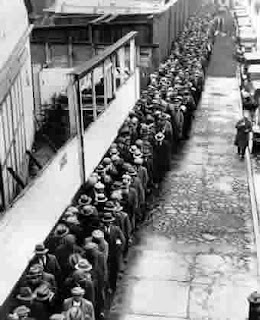 We're hearing well-paid Republican men and women in powerful governmental positions telling 15 million out-of-work folks that the solution to their problems is to get off the unemployment dole and go get a job.  Some of those same out-of work folks, even the ones who know there ARE no jobs, march with the tea partiers and vote Republican.  In some circles that's called masochism.   I wouldn't care if it was strictly their problem--even masochists need a crazy kind of love--but their actions are affecting us all.  We don't want to have to feel their pain.

Unrepressed anger and the attendant vicious stabs at any kind of remedies are hallmarks of the rest of them.  It's the Gong Show/Jerry Springer mentality, except this is real reality, with consequences.

Chris Hedges, in a scary-fascinating piece on the "American Psychosis", writes:


"Our culture of flagrant self-exaltation, hardwired in the American character, permits the humiliation of all those who oppose us. We believe, after all, that because we have the capacity to wage war we have a right to wage war. Those who lose deserve to be erased. Those who fail, those who are deemed ugly, ignorant or poor, should be belittled and mocked. Human beings are used and discarded like Styrofoam boxes that held junk food. And the numbers of superfluous human beings are swelling the unemployment offices, the prisons and the soup kitchens.


It is the cult of self that is killing the United States. This cult has within it the classic traits of psychopaths: superficial charm, grandiosity and self-importance; a need for constant stimulation; a penchant for lying, deception and manipulation; and the incapacity for remorse or guilt."

We have to stop pretending that what is happening in our country is a cyclical blip in our journey toward  glory.  We're being destroyed from the inside by our own citizens, and our real enemies couldn't be happier.  They don't have to lift a finger.  All it takes for them is patience.

Our goal is a government working toward the common good, and a free press that recognizes their role in achieving it.  Our responsibilities as citizens and voters is to make sure our government works for us.  We do that by taking our voting rights seriously and choosing our leaders judiciously.

If it's true that senatorial-candidate-from-nowhere Alvin Greene got 60 percent of the primary vote in South Carolina simply because people didn't know who they were voting for, then lord help us, we're doomed.  Something tells me we're not in the '30s anymore.  We actually do have something to fear besides fear itself.