It's Official - Goldman Sachs harbors and nurtures Creeps and Crooks. But we love the rich, so lay off.

The financial crisis has unveiled a new set of public villains—corrupt corporate capitalists who leveraged their connections in government for their own personal profit. During the Clinton and Bush administrations, many of these schemers were worshiped as geniuses, heroes or icons of American progress. But today we know these opportunists for what they are: Deregulatory hacks hellbent on making a profit at any cost.
Zach Carter, Alternet, 5/13/10
_________________________________________
In his superb Alternet blog this morning, Zach Carter published his Top Ten list of America's most corrupt capitalists.  Not surprisingly, almost all of them have had or still have substantial ties to Goldman Sachs.   And equally not surprising, even while Carter exposes them and dazzles us with the length and breadth of their successful efforts to corrupt everything within yodeling distance of their corporate grasp,  the worshippers of their Fat Cat sugar daddies are, as Carter described yesterday, out there defending their good name.
There are plenty of people roaming these great states who would have us believe the Goldman Sachs types are simply honest brokers who made a few--okay, pretty big--mistakes, but they're all family men with little, chirpy mouths to feed and we're all liberal, progressive, bambi-loving, tree-hugging, welfare-grabbing, anti-embryo, pro-intellectual, socialistic, communistic meanies if we can't see that. (Blankfein didn't say that, of course, but he didn't have to, what with all the vociferous toadies out there who will do it for him.)
But thankfully, Andrew Cuomo isn't one of them.  Cuomo, son of my hero, Mario Cuomo, is New York state's Attorney General.  He's out to get those guys, and it's not just lip service.  They know that, and they'll go after him with a vengeance.  They already have.  But nothing beats the scope of the Goldman Sackers for raiding and pillaging, and no amount of self-righteous diversion is suddenly going to turn them into grateful recipients of the E Pluribus Unum Award.  They deserve every justifiable take-down our few brave heroes are attempting.  ("Attempting" is the operative word here.  "Accomplishing" would be so much more satisfying, but we know from past experience how likely that is.  One look at the latest hand-slap from Congress proves that the proof is in the pudding.  Looky here:  "As the executives testified, Goldman Sachs was the only stock among 79 financial companies that gained in the Standard & Poor’s 500 Index. The stock rose $1.01 to $153.04 as of 5:04 p.m. in New York Stock Exchange composite trading.  Goldman Sachs, the most profitable securities firm in Wall Street history, was sued for fraud earlier this month by the Securities and Exchange Commission on a similar deal. The company contests the claim.")

Now, okay, in this paragraph I should be pulling this all together and making my point.  But the truth is, I know nothing about finances or financial transactions, or the reasons for booms or busts, or why those guys look like freakin' nuts down there on the trading floor.  I'm not expected to, since I'm not in the business, but what scares the living daydreams out of me is that way too often even the so-called Wall Street experts don't seem to have a clue.  That happened last week, when, for 20 minutes or so,  the market went into "Flash Crash" mode and we caught a glimpse of just how insane the grand scheme of all capitalism all the time really is.  (I'm sending "Flash Crash" to the word banishment people at LSSU.  Amidst all this doom and gloom, they're still having fun with reading:  "The [2010] list this year is a 'teachable moment' conducted free of 'tweets,'" said a Word Banishment spokesman who was "chillaxin'" for the holidays. "'In these economic times', purging our language of 'toxic assets' is a 'stimulus' effort that's 'too big to fail.'")
Almost finished, but I can't leave here without mentioning Ronald Reagan.  He started this, and there was nothing heroic about it.  We wouldn't be in this fix if it weren't for Ronald Reagan making "deregulation"  and "anti-government" household words.  A president who usurps his duties to the people in order to build a golden throne for corporate fat cats is no hero.  (A president who follows along in order to make friends or hide transgressions is no better--before you accuse me of forgetting about Bill Clinton's blind eye toward outsourcing and union-bashing.  And neither is a president who salts his cabinet with the same money people who were in on this without expecting some good-works penance from them.)
Deregulation.  Anti-government.  The best way to banish those words is to banish the practices.  We need regulation.   We need good, all-encompassing government.  And we need to do more to the Gold men than to try and embarrass them in public.  They don't embarrass.  They don't do anything but hoard money.  And they won't do anything for us until we make them.
Let's make them.  I'm tired of having to watch people beg for jobs while the undeserving flip us the bird by closing off the money sources to create them. 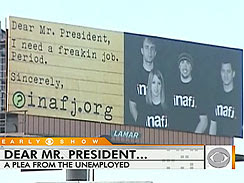 That much I do understand.
Ramona
Posted by Ramona Grigg at 5:51:00 PM