The Battle for Public Schools - Kids? What kids?

On C-Span's Washington Journal, the question this morning was "Should Public Schools receive a bailout?"  The majority of the callers said no.   I don't know where these people live--offshore, maybe--but My God.  I've lived a good long time, as my creaking joints are so keen on reminding me, but how long do I have to go on being amazed and chagrined that even now, even in the 21st century, forces from the dark side are still working on getting us out of the edjamacation business?

(By the way, what's the matter with C-Span?  Am I the only one who's noticing a definite Republican bent to their questions, their newspaper choices, and their programming?  The C in C-Span stands for Conservative these days.  Their idea of Fair and Balanced is moving suspiciously closer to the Fox's lair. That's a pity.)

These days we're looking, talking and acting more and more like some comic's version of a third world country, but so far we've kept the mercenaries at bay when it comes to our most sacrosanct obligation--basic education for all.  The Right Wing in our country have been beating their gums for eons now about the need to turn public schools over to private interests, but so far we've been able to brush them off like the nasty little gnats they are.

They can't rightly come out and admit that their idea of absolute nirvana is a wholly-privatized, for-profit, non-regulated society, so they latch onto the one guaranteed button-pusher:  taxes.  They use the threat of more taxes going to unworthy (read "socialist") causes as their reasons for denying every kid a chance at the American dream.  They know their audience well.  Dreams are for suckers when it comes to doling out their tax dollars.  Who wants to pay more taxes for anything?  Not we.  Cut the funding!  Kill the unions!  Minimum wage for teachers!  Pack those kids into the classrooms!  No free lunches!  Leave no child behind except yours! 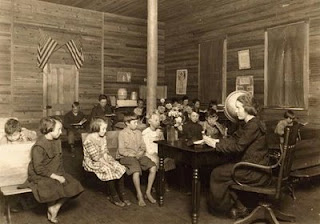 Randi Weingarten, president of the American Federation of Teachers, wrote a piece that found its way into the Wall Street Journal, (yes, truly) in which she makes the plea for more government funding.

According to a survey of more than 80% of school districts by the American Association of School Administrators, 275,000 teachers and other school staff will receive pink slips. It's not that these schools will educate fewer children, or that students won't need the personnel and programs that will be cut. But the cuts could rob an entire generation of students of the well-rounded education they need and deserve. Class sizes will swell, and students will lose important classes and programs, such as art, music, physical education, Advanced Placement classes, and counseling and intervention programs for those who need the most help.

Nowhere does she use the word "bailout", but the headline shreiks it.   It's a convenient word--it suggests we taxpayers have a choice.  Should we or shouldn't we keep funding our schools?  Will we or won't we bail them out?

Bail them out from what?  Ourselves?  Our neglect?  Our contempt?   What a sorry state we're in if the best we can do for our schools is to threaten to put them on the auction block if they don't behave.

The funding for public schools should never be in question.  If you want a voice in how schools use taxpayer funds, fine--do it from within, at the local level. Work hard to make the schools better.  Give the kids a chance. Our education system is being bullied and battered, and in the end it's the kids who take the blows. (Ironic, isn't it, that it's the Family Values mob doing the bullying?  And, as with all bullies, they're not about to pick on somebody their own size. )