It's 5 AM.  I can't sleep.  Moments ago I was lying under the covers, thinking, did I fully enjoy life before the coup?  Will I have enough good memories?  Because after today memories are all I'm going to have left.

Normally, I'm on top of things enemy-wise (or at least I thought I was), but I missed this one.  For most of the day yesterday (Saturday) the TV was off, and last night we had a rare night out visiting friends.  So I didn't know a thing about the end of the world until a few minutes after we got home, when my daughter called.

My daughter:  Can you believe they've got her on ALL the channels?

I gotta go," my daughter said, "I'm writing letters; I'm calling those stations.  They can't get away with this."

I turned on the TV.  MSNBC.  The crowds were cheering and Sarah Palin was smiling and waving, Evita-like, blowing kisses, winking.

I turned the TV off.

This can't be happening, I remember thinking.  I went to the window and looked out into the darkness.  I put my ear to the glass.  I waited for the inevitable sights and sounds of war:  the rumble of tanks, the whump, whump, whump of helicopter rotors, the ack, ack, ack of flak guns, the fires rising skyward, telling me whole towns were being destroyed. . .

So far nothing was happening.  That was good.  I turned on my computer.  It didn't appear to have been taken over yet, so I went to my Twitter page to see what my buddies were reporting about it.


Joan Walsh:  "So tired of hearin' the talk talk talk" -- she sees me! Sarah Palin sees ME!

Buzzflash:  Good Grief! Palin said "America is Ready for Another Revolution." What, the Revolt of the Zombies?
Borowitz Report:  It turns out Palin was reading from crib notes written on her hand 2nite. I for one am shocked she can read and write.


Good God.  They were using pea-shooters against heavy artillery.  All is LOST.

So what could I do?  No guns in the house.  (I'm anti-gun.  Wouldn't you know?)  I did the only thing I knew how:  I wrote protest emails to everyone at NBC, MSNBC, CNN and C-Span.

(When I went to the MSNBC-TV home page,  a huge picture of President Palin hit me, first off.  She was smiling and waving, and the headline read something close to:  Palin to Obama:  Ha!  Ha ha ha ha and HA!!)

Then it was midnight and I was tired.  I wanted so much to cling to this day, the last day of life as I would know it, but sleep took over--blessed oblivion for a few quiet hours--and now, as I write this I'm surprised at how afraid I am.

I should go and read what our new leader said last night.  Be right back.

(In the meantime, a musical interlude for your pleasure.)

This is taking longer than I thought.  Here's another one.  Sit tight:

So.  Now that it's over for the rest of us, I keep thinking:  Should we have seen this coming?  Did we completely overlook the power of big hair, good teeth and a teasing wink?  When that tea party guy held up that sign that said, "Get a brain, Morans", 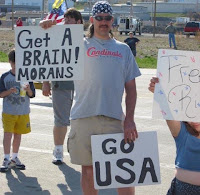 did he really mean "morans" and not "morons"?   Did we miss the deeper message?

And when that nice tea party lady raised her sign telling us to make English our "offical" language, did we just think she meant "official"?   Will Offical be our official language now that we've been taken over?

And when the tea party guy paraded with the sign that said "niggar",  was it maybe not as ignorant and odious as we originally thought?  Was he just innocently speaking Offical?


Remember how much fun we had with those people?  Are you thinking what I'm thinking?  I'm thinking it was all a clever ruse designed to put us off-guard until the actual Saturday-night Tea Party massacre.

All the time we spent laughing at them, they were just biding their time.  Sarah Palin, the unemployed-former governor-because-she-quit-Sarah Palin, finding new life going back to her old baton-twirling, cheer-leading days, collected $100,000 for an hour-long, $500-a-seat pep rally eagerly awaited and covered by the major cable networks (the same ones she called the "lamestream" media), filmed in its entirety by C-Span, the people's network (paid for by you and me, the cable subscribers), and told the citizens of the United States to get ready for a revolution.

And today, enjoying full collaboration with the media, it's here.  (Can't say she didn't warn us.)   So back to the age-old question; the one we've been asking and asking and asking without ever getting an answer:  What now?