"I hope we shall... crush in its birth the aristocracy of our moneyed corporations, which dare already to challenge our government to a trial of strength and bid defiance to the laws of our country."   --  Thomas Jefferson 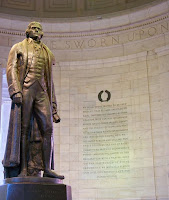 Yesterday, five "justices" of the Supreme Court--the usual suspects: Roberts, Alito, Scalia, Thomas and Kennedy--overturned most of McCain-Feingold, wrinkled up large chunks of the constitution, and laid to rest any laughable remnant of a notion that this is a government of the people, by the people and for the people.  (Unless you're one of those who actually buys into that hokum that a corporation is really a person.  In which case, more about that later.)


Yesterday those five scamps saw another chance to give their corporate heroes the gift that keeps on giving--namely US on a platter--and made into law the right for "corporations, trade associations, unions and nonprofit groups"  to spend any amount they wish from any old source, in order to bash, lash, eviscerate, decapitate, or otherwise destroy, any political candidate who might seriously get in their way.  No holds barred anymore.  None.  Free at last, free at last. . .

But, since this is America, the decision by those fair-minded (as opposed to "activist") gents, those black-robed pillars of our society, was all-inclusive:  Yes, "trade associations, unions and non-profit groups" get their chance, too.  NOW we're breathing easy.  But, wait. . . tsk. . .hmmm.   Since none of the above have treasuries anywhere near as vast as the corporations,  there might be some slight  disadvantage.  But never mind.  The law says they're included, and the law is the law.

So let's say the UAW empties its coffers in order to get a like-minded candidate elected, but GM really doesn't like the guy.  Every day for, say, six months, right up until Election Day, GM reaches into its pocket, pulls out a fist full of change, and goes after him.  A few days worth of GM's pocket change equals the UAW's treasury over their entire lifetime if they never spent another dime.  Who is going to win?  I don't know about you, but the suspense won't be killing me.

But back to the person-hood issue.  What kind of person is this "corporation"?  Is he/she young?  Old?  Male?  Female?  Black?  White?  Brown?  Yellow?  Red?  Single?  Married?  Gay?  Christian?  Jew?  Buddhist?  Muslim?  Rastafarian?  Other?  Does he/she have a criminal record?  Should he/she have a criminal record?  Is he/she even a full-time citizen of these United States, or are his/her interests elsewhere?  Why don't we know these things?

If a corporation can be a person, can a person be a corporation?  Can my liver and kidneys make up my board of directors or do I have to have a quorum?  Do I still have to pay taxes?  If I beg hard enough and lie good enough will my government give me somebody else's taxes?  Can I get a "Get Out of Jail Free" card?  Can I buy a Senator?

So many questions.  But this is serious.   It all started because an unpleasant little group of people called "Citizens United" made a nasty movie about Hillary Clinton.  I don't know all the details, and I don't care, but apparently things didn't work out on the distribution trail, so they took their gripes all the way to the top.   I don't know how this happened, either, but somehow a 20-year-old court decision in Michigan, my Michigan, Austin vs The Michigan Chamber of Commerce, got hot-footed, too.  Thrown out along with the bathwater.

All day yesterday and into today it's been a veritable firestorm, all the flak over that one ruling.  When John McCain heard of the court's decision to decimate the bill he co-wrote with Russ Feingold, he said, wanly,  “I am disappointed by the decision of the Supreme Court and the lifting of the limits on corporate and union contributions.  However, it appears that key aspects of the Bipartisan Campaign Reform Act (BCRA), including the ban on soft money contributions, remain intact.”

Russ Feingold took it harder:  "Ignoring important principles of judicial restraint and respect for precedent, the Court has given corporate money a breathtaking new role in federal campaigns. Just six years ago, the Court said that the prohibition on corporations and unions dipping into their treasuries to influence campaigns was ‘firmly embedded in our law.’  Yet this Court has just upended that prohibition, and a century's worth of campaign finance law designed to stem corruption in government.  The American people will pay dearly for this decision when, more than ever, their voices are drowned out by corporate spending in our federal elections."


Last year, Feingold stuck his finger up in the air, felt which way the wind was blowing, and knew this was coming.  He spoke about it on the senate floor last October:


"Before BCRA was passed, corporations were making huge soft money donations. They were also spending money on phony issue ads. That’s what Title II was aimed at. But what they were not doing was running election ads that expressly advocated the election or defeat of a candidate. That has been prohibited in this country for at least 60 years, though it is arguable that the Tillman Act in 1907 prohibited it forty years before that. So it is possible that the Court’s decision will not just take us back to a pre-McCain-Feingold era, but back to the era of the robber baron in the 19th century. That result should frighten every citizen of this country. The Court seems poised to ignite a revolution in campaign financing with a stroke of its collective pen that no one contemplated even six months ago. "


I think that's pretty much what Jefferson was thinking.  But since the SCOTUS Five are not "activist" judges, it doesn't matter what anybody thinks.  The law is the law.  Until it isn't anymore.   But do not fret, O ye of little faith, the justices taketh away state's rights (Bush v. Gore), but giveth them back whenever the mood strikes.  The law is the law when they say it is.

Final thought:  Every one of those bastards are in this for the long haul.  That means an entire lifetime, if they so wish it.  They are NOT too big to fail.   If they decree it, we shall fold.

I don't know about you, but I'M not taking the blame.  (Not that that makes me feel any better.)

(Cross-posted at Talking Points Memo and Alternet)
Posted by Ramona Grigg at 4:30:00 PM