No More Wind Energy Drying Devices for You!

I would imagine my grandmother has been turning in her grave a lot lately, but this latest travesty must have her positively spinning.  She was a true believer in hanging laundry out of doors, even on winter days when they came back inside stiff as boards and steaming from the cold.  Even after her daughters decided she was too old to be out there hanging clothes, she refused to use the dryer they installed in the basement.  Her one rule was that the last load had to be out on the lines before 10 AM.  It was a lazy woman who was still doing her wash in what was practically the middle of the day.

Her reasons for hanging laundry outdoors had more to do with tradition and enjoyment than with saving money or helping the environment.  She genuinely looked forward to Mondays, when the washables were scrubbed clean and dried miraculously by nothing but the very air we breathe.

So, while I miss her terribly, I'm glad she isn't here to see this.  She simply would not be able to comprehend that there are actually people out there who see clean laundry drying on clotheslines as nothing more than the kind of neighborhood blight that threatens to turn communities into rotting ghettos.

Homeowner's Associations across the country are warning residents that clotheslines and all the attendant paraphernalia, like clothespins and clothespin bags and laundry baskets and actual laundry will not be tolerated in plain sight of other humans.

(Bill Giest went after the story on "Sunday Morning". You can see it here. )

The debate is getting hot and heavy, even to the point of bringing the blasted gov'mint into it. You can go here to sign a petition stating it is the inalienable right of every man, woman and child to line dry. They're asking for a one day photo-op of the First family airing out their (clean) laundry.

Some states are already working toward rescuing the line dryers from the tyranny of the energymongers.  Vermont, for instance, passed the "Right to Dry" for all Vermonters, as described here by Lyman Orton, proprietor of the Vermont Country Store.  Lyman has been "raisin' the dickens" about it for the past few years and. . . .but I'll let him tell you.


Colorado, Hawaii, Main, Florida and Utah already have such bills in place, and Maryland, North Carolina, Virginia and Oregon aren't far behind.  They're working on it.

Even the New York Times got into it.  This from their article:  “The issue has brought together younger folks who are more pro-environment and very older folks who remember a time before clotheslines became synonymous with being too poor to afford a dryer,” said a Democratic lawmaker from Virginia, State Senator Linda T. Puller, who introduced a bill last session that would prohibit community associations in the state from restricting the use of “wind energy drying devices” — i.e., clotheslines.


A film crew in the UK is producing a film called, "Drying for Freedom", due in theaters not necessarily near you in 2010.   Click here for the trailer.

This is big, folks.  But, wouldn't you know?  Certain people don't like the idea of anybody telling you you CAN hang out your laundry.  They much prefer those who tell you you CAN'T.  Tammy Bruce's take on it is this:  "You can have my dryer…and washer…and refrigerator when you wring them from my warm, smooth hands."  She sees going back to hanging out the laundry as drudgery, and maybe she's right. but what if you just want to?

I have a dryer now, but for the first three years in the house I live in, it was air dry or nothing.  In the summer I hung laundry outside and in winter I hung them on drying racks, thereby adding needed moisture to the dry heat of a closed-up house.

I still love hanging out when the weather is good.  When it's heading toward bad, I often hang out for a while and then throw them into the dryer to finish up.  I like the way clothes feel when they've been wind-dried and I like the way they smell.  I like the idea of saving a few bucks on electricity, too.  And I really like standing out there, clothespins in my mouth (the way my Mom always did), arranging those pieces just so, until they're not only set for optimal drying but are aesthetically pleasing, too.  All of the white tee shirts are hung side by side, shoulder to shoulder.  The socks match up, heels all facing the same direction.  Sometime I even color-code.  You can get much more creative with line-drying than you can by throwing things into a dryer.  That's a definite plus. (And nobody around here would ever dream of telling me I couldn't.) 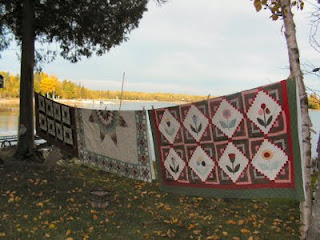 But what I especially love about this whole argument is that it's like feathers flying instead of poison-tipped arrows.  I haven't laughed so much over a cause I might actually care about in a really long time. 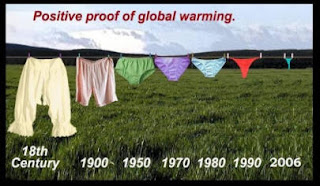