Americans At War over the Peace Prize: Go Figure 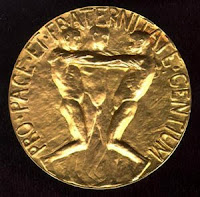 If the [Nobel] award just represented the political views of a handful of left-leaning, self-satisfied Norwegian Eurocrats, as some critics have charged, then it wouldn't matter whether Obama had won it or not. But of course it means much more. The Nobel Peace Prize, irrespective of the idiosyncratic process that selects its winner, is universally recognized as a stamp of the world's approval. For an American president to reject such a token of approval would be absurdly counterproductive.
Obama has shifted U.S. foreign policy away from George W. Bush's cowboy ethos toward a multilateral approach. He envisions, and has begun to implement, a different kind of U.S. leadership that I believe is more likely to succeed in an interconnected, multipolar world. That this shift is being noticed and recognized is to Obama's credit -- and to our country's.  Eugene Robinson, Washington Post, October 13, 2009

I am one of those people who, along with the recipient himself, was astonished at the choice of Barack Obama for this year's Nobel Peace Prize.  Yes, I initially thought it was a dubious choice--coming even before our president had had a chance to prove himself.

I watched some of the comments that day, and I followed some of the blogs, and I saw where this, predictably, was going.  Too soon, too political, too celebrity-driven.  I was prepared for that.  I wasn't prepared for the numbers of liberals and progressives who saw it as nothing short of absolute insanity.  Naomi Klein called the award "very disappointing and cheapening of the Nobel Prize".  She called the committee "delusional".

Michael Moore said, "You have to end our involvement in Afghanistan now. If you don't, you'll have no choice but to return the prize to Oslo."  ( Later, he retracted a little, saying, "I went back and re-read what I had written. And I listened for far too long yesterday to the right wing hate machine who did what they could to crap all over Barack's big day. Did I -- and others on the left -- do the same?")

There are those who bring up Mohandas Gandhi and the fact that, even though he was nominated five times, including a posthumous nomination in 1948, he was never awarded the Prize he so richly deserved.  They bring him up more than 60 years later as an example of why we can't trust the Nobel Peace Prize committee to do the right thing.

There are those who bring up civil rights leader Martin Luther King and say he was only awarded the Peace Prize because the committee felt bad about never having given it to Gandhi.

(There are those on the other side who still haven't forgiven the committee for snubbing Ronald Reagan.  The Obama pick is like rubbing sea-salt in the wounds.)

I'm trying to look at the bigger picture:  Our president received a prestigious award for which he did no campaigning, no bribing, no begging.  The fact is, he received it, I'm proud that he received it, and now we all, including Obama, should make the most of it.

Instead we're engaged in a debate over whether or not he deserves it, and what the possible motives of the Peace Prize committee might be.  It doesn't matter.  He received it.  It's an honor.  It doesn't tear down the Nobel establishment.  It doesn't make us look bad.  It can only add to the credibility and prestige we've been trying to rebuild across the globe.  But it will only do that if the world is allowed to see us as a nation more proud than outraged over the honor given our president.

But, as usual, we come across like the foolish children the world has known us to be for all too many years.  I expect the Republicans and the Right Wing to tear this action to pieces.  This huge honor going to our new black Democratic president mere months into his presidency?  Right up their alley.  More ammunition to store in their already overflowing arsenals.  (Click here for the 8 Most Outrageous Attacks on Obama's Nobel Peace Prize.)

But the liberals?  The progressives?  The so-called people for peace?  They see it as nothing more than a frivolous attempt at repudiation against George W. Bush.  (Robert Reich said, "The Prize is really more of a Booby Prize for Obama's predecessor. Had the world not suffered eight years of George W. Bush, Obama would not be receiving the Prize. He's prizeworthy and praiseworthy only by comparison."  While there may be a kernel of truth there, and while I might even see it as a good thing, I don't know this for sure and neither does he.)

They see it as a wrong-headed attempt by the Norwegian Peace Prize committee to push Obama toward more aggressive global peace-making efforts.

At the very least, they see it as yet another swelling of what some view as the already humungous Obama ego.

They don't see it for what it is:  Our chance to make an impact on the world; a chance to show them we're not who they thought we were.  Our chance to hold our heads high and be proud of what we've done in choosing Barack Hussein Obama as the President of the United States.

We've been looking for a way to salvage our history, our heritage, our worldview and, maybe especially, our dignity.  We may just have found it in the Nobel Peace Prize.  So can we please let's work at keeping the shine on that medal?

Because, really now--wallowing in the dirt is so. . .yesterday.