For Labor: A Pat on the Back, a Hail and Farewell

"Less than a century ago the laborer had no rights, little or no respect, and led a life which was socially submerged and barren….American industry organized misery into sweatshops and proclaimed the right of capital to act without restraints and without conscience. The inspiring answer to this intolerable and dehumanizing existence was economic organization through trade unions. The worker became determined not to wait for charitable impulses to grow in his employer. He constructed the means by which fairer sharing of the fruits of his toil had to be given to him or the wheels of industry, which he alone turned, would halt and wealth for no one would be available…
"History is a great teacher. Now everyone knows that the labor movement did not diminish the strength of the nation but enlarged it. By raising the living standards of millions, labor miraculously created a market for industry and lifted the whole nation to undreamed of levels of production. Those who attack labor forget these simple truths, but history remembers them.

The story of the labor movement in America is a sweeping epic, a saga of betrayal and redemption, a tender love story, a tragedy worthy of the Greeks.  As in any good story, there is hope, there is conflict; there are victims and villains, there are cowards and there are heroes. For some who have followed the story, the end has already come.  For others, the hope lives on.  But, as in any great movement, in any great story, the paradigm changes, the characters along with it.  For labor, the days of glory, of prosperity,  have dwindled.  There are many who see this as a sign of progress.  They've already picked out the casket.

So it is fitting, as we come together to mourn the loss of the strength of America, to  remember and celebrate its existence, and the people who worked to keep it strong.  From Samuel Gompers to Eugene V. Debs to Mother Jones to John L. Lewis to Frances Perkins and the Roosevelt Administration to Walter Reuther to Cesar Chavez  to Martin Luther King to the Willmar Eight to "Norma Rae" , there have been those who stood tall and gave their all to preserve and protect the working class in this country.

Most of those named here are gone now.  If they could come back today, would they lament the present conditions?  No question.
Would they see their own hard work as wasted?  Not likely.  For how much worse would it  have been without them.
Would they put their heads together and come up with a solution?  Oh, yes--yes they would.
Would the solution be revolution?  We could only hope.
Would they lead us again?  Right down the path to victory.

But they are not here, and time and events have passed them by.   There are still some who fight the battles of the workplace with a fervor we could only hope would make a difference, but shouting the truth in the wilderness is, in the end, about as effective as whispering in a crowd. 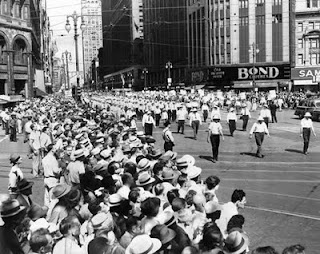 Labor Day, the celebration of our laborers, began as a union event in 1882 and eventually became a nationwide holiday.  I can remember my dad taking me to a huge Labor Day parade in downtown Detroit when I was a child.  The crowds lined Woodward Avenue by the thousands, but they were almost dwarfed by the rows of marchers holding banners and singing the songs of labor. The people lining the avenue cheered them on mightily, raucously, my dad along with them, and I cheered, too.  The outpouring of emotion was frightening, yet thrilling.  And even at that young age (I couldn't have been more than eight or nine) I sensed that we were a part of something important.

Are there still Labor Day parades today?  Are they in celebration of labor and not just the holiday?

According to the DOL:  The character of the Labor Day celebration has undergone a change in recent years, especially in large industrial centers where mass displays and huge parades have proved a problem. This change, however, is more a shift in emphasis and medium of expression. Labor Day addresses by leading union officials, industrialists, educators, clerics and government officials are given wide coverage in newspapers, radio, and television.


Our new labor secretary, Hilda Solis, said this at the Union League Club of Chicago on September 2:

From the Great Depression to 9/11, Americans have faced tough times and we beat them. Together. This time will be no different. The fact that the daughter of immigrants is the nation's 25th Secretary of Labor is testament that anything is possible in our country. My mother was a minimum wage worker at a toy assembly plant and was a member of the United Rubber Workers Union, now the Steelworkers. My father worked in a battery recycling plant and was a Teamsters shop steward.
Many people have influenced me, mentored me, and inspired me:
I am a product of:
I'm proud of all that. It is what defines me and shapes my goal as Labor Secretary: Good Jobs For Everyone.
And here's what I mean by "good jobs":


I want to believe, even in the face of all evidence to the contrary, that the people who labor in and for this country will take back their rightful positions as the vanguards for prosperity, and that those in power will be there to move them forward.  To all who labor in the factories, in the warehouses, in the fields, in the offices, in the schools, and behind the counters, may this day be the turning point.  May tomorrow bring the changes that have so long been promised.


Our force is in our numbers.  Our weapons are pride and determination.  Our hope is in ourselves.