The Danger in Underestimating the Right Wing

I found this on a website called The Progressive Puppy this morning.  I'm still shaking and bordering on the incoherent, because I honestly don't know what to DO about this. 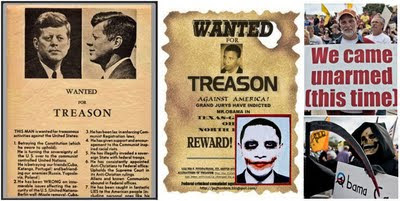 The JFK poster appeared all over Dallas just days before he was assassinated.  I don't know how widespread the Obama poster has been, but the three of these pictures together tell a story that just cannot be denied.  (Thank you, Max Pearson.)

There is something going on in this country that is insidious and destructive and dangerous.  We just can't go on pretending that it comes from fringe groups in small numbers.  Not when we have the Glenn Becks and Rush Limbaughs and Michelle Malkins and even so-called Christian ministers advocating taking Obama down.  They may not be selling violence outright, but they're adding flames to the fire, and they know it.  It draws audiences and constituencies, and they know their people well.

These are the same flame-throwers who, if something does happen to President Obama, will be the first to say, "Don't look at me.  I didn't do it."

At the same time, I don't want to be one who says, "I didn't do enough".  I could cite dozens of websites here that advocate violence against our president, but I won't.  A Google search with the right words is enough to give me nightmares again.  It's out there, and it's growing, and it's becoming mainstream.

We've already seen the next step past freedom of speech.  We've seen assault weapons being carried into political rallies, where the president is scheduled to speak.  Gunslingers coming to shut the president up.  Now it's at the threat stage--next will be the actual shooting.

When do we finally get it that this is no longer a Free Speech issue?  This is anarchy, and we're standing around making jokes about it, pointing fingers, shaking our heads, and then turning away, as if ignoring the so-called crazies will dilute their messages of pure hatred.

They're just getting started.  When the first "citizen" walked into a public auditorium with a gun slung over his shoulder and nobody stopped him, it gave permission to dozens, then hundreds, then thousands, to follow.

Nancy Pelosi teared up the other day when she talked about the very real dangers in the advocating of violence.  What was the reaction?  A campaign of hatred and ridicule against Nancy Pelosi.

I'm not about to carry a gun to get my message across.  All I have are words, and in this present atmosphere, they're pretty puny.  But I see what's happening--this all-out hatred, this increasing call to violence--as wholly un-American.  This is NOT who we are.  This is NOT who we were meant to be.  Generations of Americans didn't work their asses off to bring us to this.  This is not a vast Right Wing conspiracy, it's Right Wingers out in the open, advocating anarchy, threatening to "take back" a country they've never understood, never nurtured, never respected.

They don't deserve it and they're not going to get it without a fight.


[It's] time for other Americans, of whatever persuasion, to take a stand, to say we're better than this. They should do it because it's right. But also because we've seen so many times what can happen when this garbage gets out of control. Think about the Oklahoma City bombing, and the assassinations of King and the Kennedys. On Nov. 22, 1963, as they were preparing to fly to Dallas, a hotbed of political insanity, President Kennedy said to Mrs. Kennedy: "We're heading into nut country today."

(Cross-posted at Talking Points Memo here.)
Posted by Ramona Grigg at 10:30:00 AM