May it be said of our Party in 1980 that we found our faith again.

And may it be said of us, both in dark passages and in bright days, in the words of Tennyson that my brothers quoted and loved, and that have special meaning for me now:

"I am a part of all that I have met
To [Tho] much is taken, much abides
That which we are, we are --
One equal temper of heroic hearts
Strong in will
To strive, to seek, to find, and not to yield."

For me, a few hours ago, this campaign came to an end.
For all those whose cares have been our concern, the work goes on, the cause endures, the hope still lives, and the dream shall never die. 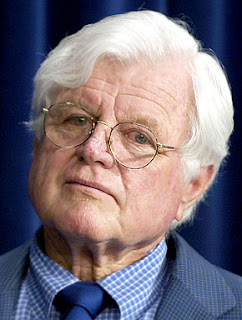 I woke up this morning to the news I've been dreading for weeks now. Ted Kennedy, the Good Man of the Senate, has died. He has been on my mind a lot lately, as we wage this battle for the common good, because what I fear most now is that our progress will suffer badly without his counsel, without his presence.

For more than 40 years he has consistently been on the side of the people without power. As former senator Bob Kerrey said on "Morning Joe" today, "If you're getting the shaft, you ought to be weeping today because Ted Kennedy was your best friend."

The list of his accomplishments, the bills he worked so tirelessly to get passed, the people whose personal stories tell the tale of a man of high privilege coming to understand his role in the negation of human misery--are a part of our history we will never forget.

But no matter how much we would prefer to concentrate on the triumphs of his life, on the undeniable good he has done for his country, the specter of Chappaquiddick will never stop casting a long shadow over it all.

Already, this early in the morning, it comes up in the remembrances of those who knew him and are now before the cameras talking about his life.  It happened--we know it happened.  The facts are that Mary Jo Kopechne's life ended on July 18, 1969, after  drowning in a river on Chappaquiddick Island.  It was late at night and she was a passenger in a car driven by Sen. Edward Kennedy. They were heading toward the ferry to the mainland after a victory party when the car skidded off a bridge and crashed into the water. Kennedy survived, but Mary Jo didn't. She was just days away from her 29th birthday.

There is no question that Ted Kennedy panicked and swam across to the mainland, leaving Mary Jo in that car in that river.  Did he try to save her?  He says he did. He says he was going for help, but it was hours before anyone found the car with Mary Jo's body inside.

Leaving the scene of an accident is a crime, and there were a lot of us--maybe most of us--who wanted to see him, at the very least, serve time in jail.  His sentence was eventually suspended, a seemingly contemptuous judicial act that stunned us all. No punishment for running like a coward, allowing a young woman to die? Why? Because the rich and famous are exempt from having to pay for their sins?

For years I didn't want to ever hear the name Ted Kennedy again. For years I heard the stories of his drinking, his carousing, and I wondered how the good people of Massachusetts could go on electing him.

He ran for president against Jimmy Carter and campaigned badly. Again, we counted him out.  Then he gave his concession speech, his "the dream shall never die" speech, on the night of Jimmy Carter's primary victory. There were a number of us in the room that night watching the returns, but I can still remember how quiet it was as we listened to the final moments of his speech. I remember that none of us expected much from him by that time so when he started we were barely listening. When it ended, we all looked at one another and someone said, "Why in God's name did he have to wait until now to give that speech?"

I've heard people say that he campaigned badly because, after Chappaquiddick, he felt deep down that he didn't deserve the presidency. I can't begin to look into Ted Kennedy's soul at the time, but after that defeat he was a different man. He went to work to fight for the causes his liberal heart told him were the most important, and he never looked back.

Already I'm seeing the hatred toward the Liberal Lion, the greatest senator of our times, bombarding the boards.  I won't repeat them here because I choose to celebrate Ted Kennedy's life.  It's a life that is ultimately deserving of praise.  Many of the people who are without a doubt going to go on the Hate Kennedy rampage today will laugh at the idea of a plea for forgiveness, but to forgive is not to forget. I'm not alone in wondering where Mary Jo's life would have taken her.  From all accounts, she was good, decent, smart, loving.  She was on Robert Kennedy's staff, even helping to write a speech he gave against the Vietnam War. Who knows what kind of career she would have chosen?  Where she would be today?

I've always wondered if it's possible that Ted Kennedy chose to give his life over to helping people who couldn't help themselves because the one time he might have actually saved a life, he failed.