Is There Nothing Sacred in this Country?

"Hundreds of buildings commissioned by the Works Progress Administration and Roosevelt’s other 'alphabet' agencies are being demolished or threatened with destruction, mourned or fought over by small groups of citizens in a new national movement to save the architecture of the New Deal."

We have a nasty habit in this country when it comes to old buildings.  We refuse to see value in them once walls begin to crumble and windows begin to fall out.  No matter their history, when the time comes that they require some major TLC (and it will. They're OLD!) they become liabilities and committees quickly form to figure out how they can get around that old historical nostalgia thing and convince the public that an old building is just an old building and even when it's gone they'll still have the memories.

"It’s ironic to be tearing [WPA structures] down just when America is going through tough times again,” wrote biographer Robert A. Caro, in his 1974 book, “The Power Broker, “ We should be preserving them and honoring them. They serve as monuments to the fact that it is possible to combine infrastructure with beauty.”

If you've gone across this country anywhere at all, chances are you've seen something that was built as part of Roosevelt's WPA Project, designed to put millions of people back to work in the 1930s.
You've seen beautiful bridges, roads, parks, and public buildings. You've seen murals in railroad stations and libraries, commissioned by the New Deal visionaries, and painted by out-of-work artists.

The Painted Desert Inn at Arizona's Petrified Forest National Park was a WPA project built in the 1930s by the young men and boys in the CCC (Civilian Conservation Corp) . We visited it a few years ago, and I was completely enthralled by the work that went into it. As a works project during the depression, the designers and facilitators could simply have put up a utilitarian building and left it at that. But they made it a work of art to complement the stunning beauty of its surroundings.

It had been abandoned and neglected until recent years, but thanks to more current visionaries, it's been lovingly restored. It is no longer an inn, but the murals, the chandeliers, the painted glass ceiling and the magnificent stucco work of the 1930s are intact. (Click here to see more pictures of the building.) 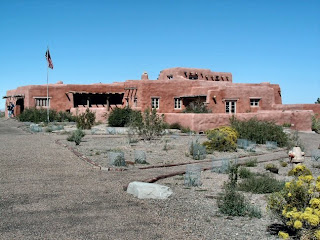 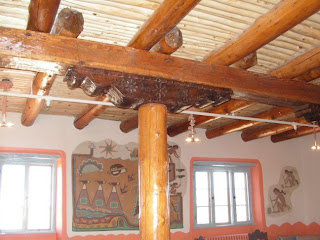 Murals, posts and vigas created and completed by CCC Corps 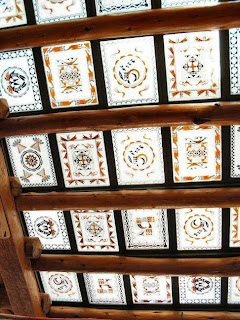 
In my online travels researching this post, I found this remarkable website with photos of some of the other WPA projects across the country. It's not complete by any means--there were thousands--but it gives an idea of the scope of the projects, and, more importantly, the worth.

You've seen the heartbreaking photographs of Dorothea Lange and Walker Evans and you've read the clear and poignant words of writers like Eudora Welty, Saul Bellow, John Cheever, Richard Wright and Zora Neale Hurston--all employed by the government during the days of the WPA. 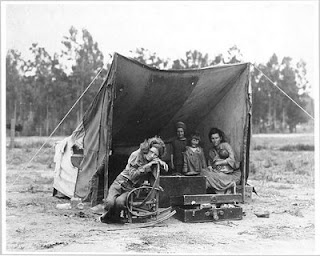 "I saw and approached the hungry and desperate mother, as if drawn by a magnet. I do not remember how I explained my presence or my camera to her, but I do remember she asked me no questions. I made five exposures, working closer and closer from the same direction. I did not ask her name or her history. She told me her age, that she was thirty-two. She said that they had been living on frozen vegetables from the surrounding fields, and birds that the children killed. She had just sold the tires from her car to buy food. There she sat in that lean- to tent with her children huddled around her, and seemed to know that my pictures might help her, and so she helped me.There was a sort of equality about it. "
(From: Popular Photography, Feb. 1960. Dorothea Lange describing the series of migratory farm labor photographs she took in February or March of 1936 in Nipomo, California called "Migratory Mother")

Yes, the New Deal WPA programs were make-work projects. And yes, they could be considered entitlements, since their work wasn't what most would consider "necessary". But oh, the treasures they produced! (Deny that, you dolts in Washington, who still believe, all evidence to the contrary, that the heart and soul of this country lies in keeping the Upper Class uppermost).

In "American Life Histories", from the Library of Congress, I found manuscripts from the Federal Writer's Project, 1936-1940. Every state in the union produced a WPA guidebook written by the writers of the day. In one of them, for the Georgia Writer's Project, Mrs. Ada Redford interviewed Mr. Clifford Farr, owner of the Skinner Clothing Company in Augusta on July 17, 1940. Here's an excerpt:

Ada Redford: "What do you think caused the depression?"

Clifford Farr: "It would take a more brilliant mind than mine to tell you the real cause. My ideas along with a lot of other small merchants is about the same. It was Wall Street against the world, along with a political upheaval, in other words, a Republican trick. Millionaires were made over night from the life savings of others. The war got the credit for a lot of and rightly so. I remember the close of the Spanish American War; cotton dropped to 3 1/2 and 4 cents a pound, why? Politics and the little man being crushed and beggared by the man or men who were in power. Take my business for instance; before the last depression fourteen families were being supported from it; my own personal loss was 50%. I was worth around $40,000 with an income of $5,000. That was cut in half and today my average is a little more than $3,000."
Ada: "What to you think of conditions today?"
Clifford: "They are about the same as the pre-war days of the last World War. When this program is over, there will be an increase in business. The present administration is wise now to all the Republican tricks and there will not be another depression such as Hoover and the Republicans caused. The people in our country know now that it was a political trick to enrich the big man and make beggars out of the little man. We have more unemployed than any other country in the world today, and the cry is that this is a machine age. That is true, to a great extent, but who built the machines? Where did the money come from? Out of the pockets of the working man? Again I say, 'Wall street against the world.' "

These words, those photographs, along with the thousands of other treasures that came out of the New Deal, not only should be, but must be preserved. There are tribes of dangerous power-mongers who want to re-write history and ignore the obvious signs of a country turning back on itself, but we can't let that happen.

Those buildings, those parks, those bridges, those artworks, those words, were crafted by a people who came out of a darkness artificially created by hubris and greed. They built a new America for us. The least we can do to preserve the memory of those hard times is to preserve the wonders their hard labor created after the New Deal administration finally saw the light and gave them hope.
Ramona