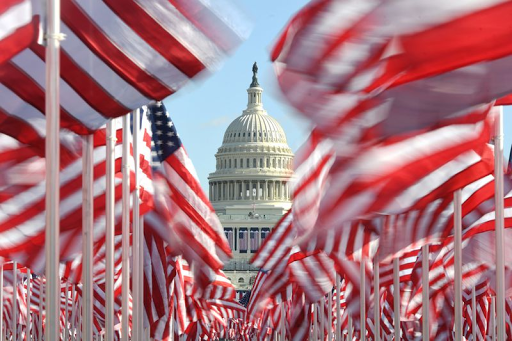 Twelve years ago, on this very date, on another Inauguration Day, I started this blog on a note of hope and change. Barack Obama was being sworn in as president for the first time and it was a day so overwhelming I felt as if I might burst if I didn't put my thoughts to good use.

I needed to be a part of that, if only as an unknown witness, an observer, a chronicler. I look back on the pieces I wrote during those 12 years sometimes with joy and sometimes with sorrow. I didn't chronicle everything. I picked and chose whatever struck me and I didn't keep a schedule. I saw it as a blog and not a job. It was my place and I loved having it here.

I built a sidebar that showcased other writers doing meaningful and wonderful work. Most of them are still there, thankfully. They did see it as a job, and they never gave up. (The sidebar is still there, still up to date, still there for you to use.)

History will view Donald Trump's presidency as a warning that, as a democracy, we were far more fragile than we could have imagined. Those of us who warned against him early on couldn't imagine that a president of the United States could go that rogue. Trump was always an incorrigible liar and a crook. He was always a narcissist and a sociopath. What we didn't expect was the help he would get from a political party sworn to preserve the republic and to protect us from all enemies, both foreign and domestic.

I don't need to regurgitate Trump's four years here. In fact, I refuse. But as I write this, Joseph R. Biden Jr. was just sworn in as the 46th President of these United States. Kamala Devi Harris was just sworn is as the first Female of Color to ever advance to the Vice Presidency. The Democrats have a tenuous hold on both the House and the Senate, and Biden's cabinet is already at work to begin the healing and take us to a far different place.

So I've moved to Substack, to newsletter country, and I hope I'll see you there. My general blog/newsletter is called Constant Commoner. It's a continuation of the things I write here and at Medium.

The second newsletter, Writer Everlasting, is geared toward writers and writing. Both are public and can be read at any time without a paywall.

You can also find me at Twitter. I spend a lot of time there, no apologies. I love that community.  This is why.

This blog will always be here, as long as Blogger allows it. The posts I've written will be available as an archive. And do keep an eye on the posts under "Necessary Voices", at the sidebar to the right. They won't disappoint.

No, seriously, I've just moved; I'm not  going away. I still have much to say, just in another neighborhood. I'm over at Substack most of the time now, though I still have a page at Medium. I've moved Constant Commoner to Substack, and I've added a blog called Writer Everlasting. (Geared to writers, though anyone can read it.)

I have an author's page. Sort of. It's all here. The doors are always open and I'm always ready for company.