Will Trump Get a Sympathy Surge? Or Is America Finally Horrified Enough? 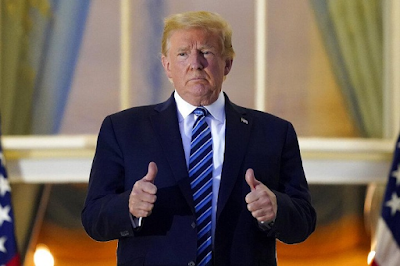 Donald Trump has COVID-19. I know you know that. It’s big news. The biggest. We can’t get a break from the drama of Donald Trump having COVID. We watched with some interest as the president’s helicopter, Marine One, eased onto the White House lawn, loaded their precious cargo, and airlifted the president* to Walter Reed National Military Medical Center, some 8 1/2 miles away.

Once there, Donald Trump wanted to go home. He at least wanted his visit to seem as unlike a hospital stay as he could. He was at a desk! He was still working! Don’t worry! He recorded two videos, supposedly two days apart, but discovered by the techies to have been filmed within an interval of around a half hour. He was still wearing a suit jacket, still wearing cuff links. How bad could it be?

Outside on the street, within Trump’s view, crowds of his admirers gathered, waving Trump and blue line flags, honking horns, blowing whistles, and the man inside, already high on steroids, it would appear, was elated. His people! He had to get to them, to let them know how happy he was that they were there! Nobody knows yet how it happened, but Trump appeared on camera again, giddy with a happy secret that would be revealed within minutes — so stay tuned, America. And again we were glued.

Then, minutes later, there was real breaking news: The President of the United States, a COVID patient sick enough to have been airlifted to the hospital just two days before, was heading out the door, was getting into a black SUV, was masked but clearly joyful to be out of there, was waving and thumbs-upping to his fans — so, see? If there was a living, breathing Superman Donald Trump was it. What a moment!

And then it was over. The SUV drove through the crowd and headed back to the hospital, where Trump got out on his own, climbed the steps and went back inside. Every medical expert was and is horrified. Trump, an active COVID patient, deliberately, recklessly exposed the Secret Service members inside the hermetically sealed van to possible COVID because he couldn’t stand the thought of being inside, quarantined, away from his beloved cameras.

At this writing, he’s still high on steroids and talking crazy. He’s invincible! He beat it! “Don’t let it dominate you”, Trump tells a country still in the throes of a pandemic.

On his victorious return to the White House, he stood on a balcony, clearly breathless, but, ever the actor, with thumbs up, shoulders back, maskless. Tough guy. He went inside to greet his masked staff, who, if they had any sense about them, must have been terrified. They should have been outfitted in PPP gear, but they weren’t. Their masks were their only defense against that lunging, spewing germ factory.

The thing Donald Trump cared the most about, after his release (clearly against the hospital’s warnings), was the positioning of the cameras. They had to make him look good, the picture of health. His first thought as he entered the White House was to make a video designed to let his public know he was all right. He, Donald Trump, got through this. Everything was going to be all right.

So this morning we woke up to what might be considered his most bizarre video if there hadn’t been so many that came before. (The video is out there. It’s bizarre enough. But here are the words. Donald Trump’s words.)

“I stood out front. I led. Nobody that’s a leader would not do what I did. I know there’s a risk, there’s a danger. That’s okay. And now I’m better and maybe I’m immune? I don’t know. But don’t let it dominate your lives. Get out there, be careful,” he said in the video, which was filmed within close proximity of White House staffers all without wearing a mask.

Of his battle with Covid-19, Trump said, “I learned so much about coronavirus. And one thing that’s for certain. Don’t let it dominate you. Don’t be afraid of it. We’re gonna beat it. We have the best medical equipment, best medicines.”

There is nothing normal about what Trump, still under the influence of steroids known to cause mental fog and feelings of invincibility, said there. It was a reckless performance, worrisome enough coming from an ordinary patient, but Donald Trump is, at least until January, 2021, the President of the United States. He must relinquish his hold on the presidency until he is well. But he won’t do it. We know he won’t. Mike Pence, along with members of Congress, are in a position to demand that the president temporarily step down, but they won’t do it, either.

Section 4 of the 25th Amendment:

So it’s up to the people now. Is Trump well enough to assume the duties of the presidency? (Okay, I’ll say it. Elephant in the room: He never was.) Have we had enough of this shit show or is it just too fascinating, too delicious, too crazy to let go of it now?

Trump, as his doctors have warned, is not out of the woods yet. His fans will get louder and more rabid as his illness progresses. The noise will not stop. Will it give him a boost among voters?

Anything can happen between now and November 3, but at this moment, Donald Trump is clearly not able to run this country. Nobody could have predicted that the president would be hopped up on steroids, telling the country to ignore a deadly virus that HE exacerbated, that HE tried to hide, that HE literally worked against fighting, that has infected many millions and has killed an unconscionable number of Americans.

Millions of us, along with the ghosts of more than 210,000 victims, say “enough”. Will it finally be enough?