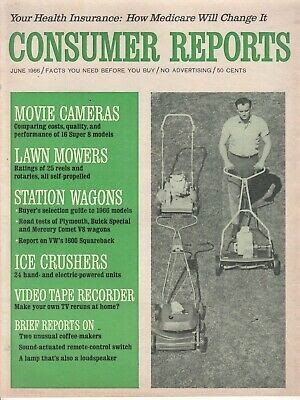 (Note: When the fur was flying over the ACA (Obamacare) more than seven years ago, I found an early story about the fur flying over Medicare in 1966. I wrote about it for the late Alan Colmes and his website, Liberaland. This is the story as it was published at Alan.com, October 22, 2013.)

In the next town over from us the recycling station is in a huge semi-trailer.  You have to climb six narrow metal steps to get up into it, but there is an aisle you can walk down and there are huge open boxes in which to throw your stuff.
The beauty of it is that while I’m dropping off my own recyclables, I can dig through the newspaper and magazine bins to see what’s there for the taking.  Through the years we’ve found some fascinating reading, some of it as current as yesterday, but last week we found a treasure trove:  Seventeen Consumer Reports magazines, ranging from1965 to 1980.

What struck me as I read through them was how much actual watchdogging went on within those pages and to what lengths they went to explain their findings. Page after page of small print, as if they actually anticipated that their readers would want to take the time to read it all. (No internet, no cable. I get it. But still. . .)
Back in June, 1966, their headline story was about the new Medicare law taking effect in July. The law was complicated.  Every aspect of health insurance, hospitalizations, physician and pharmacy services, and medical goods had to be considered.  Nothing like it had ever been done on such a large scale before. The Government was pouring an estimated $3 billion plus into it during the first year alone. Who would pay for what?  Who would gain the most?  Who would lose the most?  (Sound familiar?)
There were worries about overcrowding of existing facilities.  All of those sick folks who had never been eligible for insurance due to their pre-existing condition (old age) would now be bursting through the doors looking for a chance to live longer.
There were worries about elderly patients not wanting to leave their hospital beds, now that the money worries had been eased.  There were worries about relatives scheming to leave their kin in those happy places rather than to have to take care of them at home.
There were worries about understaffing.   They would need some 20,000 more doctors and more than 70,000 nurses, with a need for another 200,000 nurses by 1970.
But they were nothing compared to the worries keeping the insurance providers, the pharmaceutical companies, the heads of hospitals, and the Hippocratic doctors up at night.  The threat of socialized medicine was upon them.  This was it!
So let’s take a trip in the way-back machine–all the way back to the year 1961 when one Ronald Reagan agreed to make a 10 minute LP record sponsored by the AMA as part of Operation Coffee Cup, the supposed grass-roots plan to keep medicine out of the hands of the Government.
They called it “RONALD REAGAN speaks out against SOCIALIZED MEDICINE”. 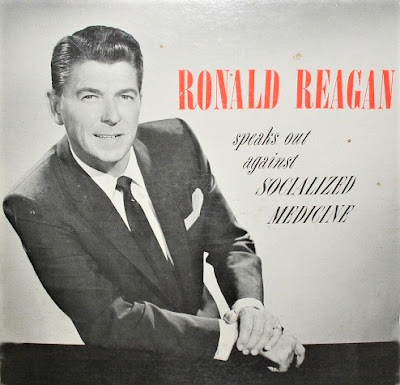 This was the same Ronald Reagan who, as president, pretty much kept his paws off Medicare, that dread  portal to full-blown Socialism. I'm guessing the Heritage Foundation, much as they adore The Man, would just as soon forget the time The Best President in the Whole Wide World caved to the forces of the “politically popular” Medicare program and began talking up adding catastrophic acute care provisions for the elderly!
Such was the evolution of a hated, perennially doomed social program.  Which brings us to the Affordable Care Act.
The ACA start-up costs may well be expensive to the point of mind-boggle, but, just as with Medicare, it’s a plan that is essential and long overdue.  It’ll be full of jitters and glitches and adjustments, just as Medicare was. The full effect will be maddeningly slow, there will be a multitude of reasons to doubt it,  and the opponents–those same opponents who have spent years trying to kill Social Security and Medicare–will never give up. (Forbes is claiming the ACA website is crashing on purpose because “they” don’t want us to know how costly the plans really are. It’s also claiming a rise in insurance premiums by 99% for men and 62% for women–a claim already disputed and put to rest.)
But here’s the thing about the opposition:  When they showed their willingness to spend many millions on a Tea-Party-sanctioned hissy-fit against it that went nowhere and benefited no one, they lost any chance to have a voice in the discussion about essential, low-cost Government-sponsored health care.
It will happen, with or without them.  And years from now their cheering audiences will be shouting, “Hands off my Obamacare!”
Posted by Ramona Grigg at 9:39:00 AM