"We're coming for your guns" may be what we need to hear. 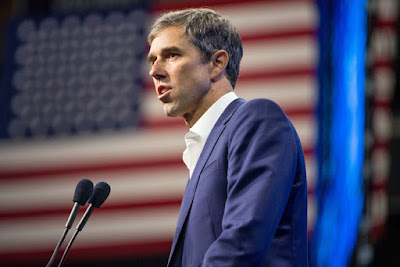 Of all the candidates running for president on the Democratic side, Beto O’Rourke stands out as the maverick, the rebel, the “I don’t give a Flying F” guy who doesn’t pander and doesn’t cower. He’s got a mouth like a drunken pirate and he revels in it. (His campaign is selling tee shirts that say, over and over, “This is F — ked up”.)

Beto is the guy who almost took down Ted Cruz in 2018. That was big. He’s a Texan who speaks perfect Spanish, who waves his arms and bounces around to the point of distraction, but can handle comparisons to the Energizer Bunny because, well, he’s energized.


By rights he should be a force to be reckoned with — he’s young, earnest, charismatic, Kennedyesque— but so far there have been no real poll surges. Nothing that would suggest he might have a chance. It’s a crowded field and there are other more adept stars who tend to dominate the stage.

But Beto is a force. He shows up on the border, near tears as he reports on the conditions in the refugee camps. He boldly rails against white supremacists from his perch in Texas, a state known for its love of guns and rage, and he minces no words when he talks against Donald Trump. (Tell us how you really feel, Beto.)

He made it clear just days after the August 3 shooting massacre in El Paso, where 22 people died in the district Beto represented in congress for six years, that he had no interest in running for the senate. It’s the presidency or nothing, because he knows only the power of the presidency will allow him to make radical change.

The shootings hit him hard. He took a two-week break from campaigning so he could be with his people in Texas. He went to funerals and visited victims still hospitalized. He gave blood. He listened to horrific stories told to him by victims and survivors, as well as the doctors trying to repair bodies savagely shredded by bullets meant only as the ultimate deterrents on a battle field.

It changed him. He’d had enough. And, as usual, he was going to say so.
In every public appearance, his fury was palpable, his tears near the surface, as he zeroed in on the proliferation of weapons of war in a culture so fearful of “others”, reports of armed white madmen going on deadly rampages have become commonplace.

Beto made a wrenching decision: He could no longer ignore the need to get those weapons out of the hands of anyone who wanted one. No more “We don’t want to take your guns away from you”, as he had earlier promised, however reluctantly. Now, without equivocation, his message is laser-beamed on the absolute removal of military-style weapons from the hands of private citizens.

In an August 22 editorial, he startled everyone by putting in writing what no politician had ever dared. He wrote,


On Aug. 3, my hometown of El Paso, Texas — one of the safest cities in America — was attacked in one of the deadliest mass shootings in our country’s modern history. This was an act of white nationalist terror, and one we could have prevented.
All countries have video games. All countries struggle with mental health. All countries deal with hatred. But only America has more guns than human beings — 390 million firearms in a country of 329 million people — which kill nearly 40,000 people every year.
Some of the nurses, surgeons and doctors heroically treating victims at Del Sol and University Medical Center in El Paso told me they hadn’t seen such horrific wounds since they were deployed abroad in our armed forces, saving the lives of soldiers on the battlefields of Afghanistan and Iraq…
… That’s why, as president, I would institute a mandatory buyback of every assault weapon in America.

He didn’t say “every gun”, he said “every assault weapon” and he’s careful to make that distinction every time he repeats his promise. On August 31 he was in Charlottesville when a reporter asked him how he would address the fears of people who were afraid he really would take away their assault weapons. He said without hesitation:

“I want to be really clear that that’s exactly what we are going to do. Americans who own AR-15s, AK-47s, will have to sell them to the government. We’re not going to allow them to stay on our streets, to show up in our communities, to be used against us in our synagogues, our churches, our mosques, our Walmarts, our public places.”


And at the presidential debate held on Thursday, September 12, he said again, “Hell, yes, we’re going to take your AR-15, your AK-47, and we’re not going to allow it to be used against your fellow Americans anymore.”

It’s clear he means it. He may, in fact, have blown any chance at the presidency, but he has accomplished what he set out to do. He's establishing a radical idea, and radical ideas have to start somewhere.

He has started a dialogue that will build momentum, and as it builds, the idea of an all-out ban on assault weapons will become less radical and more accepted. Millions of us want to see it happen. None of us knows how it would be possible. That’s the next step: figuring out how it can be done.

But first things first. A political leader has said out loud what hundreds of political leaders are saying behind closed doors — we must get assault weapons out of the hands of ordinary citizens. We can’t rely on licensing, or background checks, or even statewide bans, as in California, when gun purchasing is so accepted, so easy, that any restrictions can be readily sidestepped. Literally anyone can buy a gun. Sellers are waiting to accommodate. Enough of them are willing to look the other way. The only solution, as far-fetched as it seems, is an outright ban.

The blowback to Beto’s insistence on an assault weapon ban is fierce, as he might have expected. Members of his own party are praising his honesty while not quite getting there yet. Both Kamala Harris and Corey Booker have plans to do away with assault weapon sales but they’re swimming in red tape, trying to be all things to all people. They aren’t nearly as convincing as Beto. Yet.


I frankly think that that clip will be played for years at Second Amendment rallies with organizations that try to scare people by saying that Democrats are coming for your guns.

And, as expected in this culture now, Beto is getting death threats, like the one from a Texas state legislator who tweet-warned, “My AR is ready, Robert Francis”, invoking Beto’s real name, doubling as a reminder of what happened to Robert Francis “Bobby” Kennedy.

But the message is indelible now: If we want to end the massacres we have to ban military-style assault weapons. Beto O’Rourke did this for us and, while we may not reward him with the presidency, this is how he will be remembered. As the leader who finally cut through the bullshit and gave it to us straight. He opened the floodgates and, as with every radical idea, we’ll need to get used to it. Already Adam Schiff is calling for petition signatures to reinstate the assault weapons ban. (kuuuuu)

Joe Biden is reminding voters in a tweet that he worked on banning assault weapons before and he’ll do it again as president:


25 years ago this week, Senator Feinstein and I led the charge to ban assault weapons and high-capacity magazines. We beat the @NRA and got it done. As president, I’ll do it once again. We will get these military-style weapons off our streets.

Kamala Harris is pushing a red flag law that will allow the temporary seizure of guns in the hands of White Supremacists showing signs of acting on their threats. (Key word: temporary.)

So, if we’re lucky, Beto’s Democratic colleagues will get braver. They’ll test the waters to see if they can survive the onslaught. They’ll waffle until it seems safe. They’ll yell as if they mean it, and then they’ll add exceptions to keep voters happy. But all the while Beto will be howling to be heard and his message will stay the same.

In time, the notion of an assault weapons ban will become not just acceptable, but necessary.

In time, the howling will be coming from the other side. And when the ban is in place, when military guns in the hands of private citizens becomes a painful memory, when statistics show the number of lives we’ve saved — by the thousands — we’ll wonder what took us so long.