The Culture of Rape is over. Get The Hell Out of Our Way

I'll make this short and to the point: If you're a man and you've ever tried to undress a woman when she didn't want you to, if you've ever forced her legs apart, manhandled her, scared her into submission, tried to shame or coerce her into having sex with you--if you've ever used force to get your way?  You're either a rapist who succeeded or a rapist who failed.

The Department of Justice describes rape this way:


“The penetration, no matter how slight, of the vagina or anus with any body part or object, or oral penetration by a sex organ of another person, without the consent of the victim.”

We're now, thankfully, coming into an age where women can feel safe coming forward with their stories. For centuries, that hasn't been the case. In certain countries, even in modern times, rape is used as punishment or retribution. It's because rape is an abomination. The worst kind of violation. The thing every woman fears.

Rape is a violation, and so is attempted rape. If it has never happened to you, you can't even begin to understand the trauma it causes. You don't need to understand it. You only need to accept it.

If you caused it, own it. No matter how long it takes, no matter when it happened--own it. You did this. You.

We're talking about this now because we just came off of a Senate hearing where Brett Kavanaugh, Donald Trump's candidate for Supreme Court justice, was called on to respond to attempted rape accusations by Dr. Christine Blasey Ford. The incident happened more than 30 years ago, when both of them were teenagers.  Kavanaugh, now a circuit court judge, says it didn't happen. Dr. Blasey Ford, a psychology professor, says it's seared into her brain and she'll never forget it. 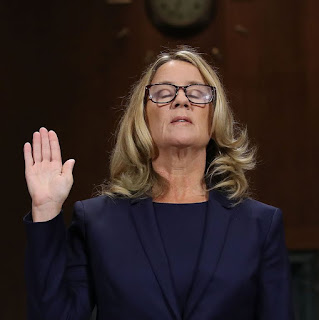 The description of that assault is excruciating. Imagine sitting before millions of people having to tell that story, knowing before you even begin that viewers by the millions--including half the committee before you--all of them men--likely won't believe you.

Then remember that there are millions of other women who know that, too--that they won't be believed, that they'll be told to get over it--and will feel safer keeping their secrets to themselves. It'll haunt them forever but that's the price they'll pay not to have to be shamed again. And the worst of it? The person who did this to them will go free.  No guilt, no shame. It'll be as if it never happened.

There's a long-standing culture that says men should be able to satisfy their sexual needs. Women are there to do that. Sometimes they have to be "convinced". The male sex drive is strong, so when it gets out of hand we can't blame them. (The dark side of this is that when women are willing sex players they're considered whores and sluts. Boys and men have more respect for the females who fight them off than they do for the females who enjoy sex as much as they do.)

Cultures change and now this one must, too. If you're a man working to keep women in the place you've designated for them, we're coming after you. You will not be safe from us. Women are rising up, working to eradicate abuse and the ensuing shame. The blowback--as expected--is going to be fierce.

Now get the hell out of our way.


Cross-posted at Medium and Crooks & Liars