When the cameras leave Flint, Michigan Will Still Be Michigan 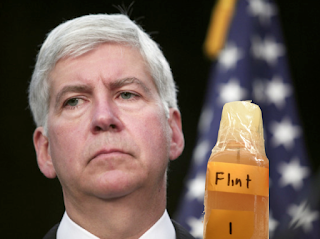 On January 1, 2011, Rick Snyder, Michigan's new governor was sworn in.  Almost immediately after he solemnly swore to uphold the duties of his office, he made it clear that Michigan was in for a drubbing.  He was going to Make Michigan Great Again. The message was clear: "I'm the boss and you're not. I have friends in high places and you don't. Thanks for the votes, now get outta here."

On March 10, 2011, three months after his swearing-in (and five years ago, almost to the day), I wrote a blog called Michigan is Under Siege: Is Anybody Watching? It highlighted Rachel Maddow's yeoman efforts to draw attention to the plain fact that Michigan was heading toward dictator rule.  She centered her investigation on the emergency manager takeover of Benton Harbor, a poor, black city that had fallen on hard times and desperately needed help, but was far from requiring a potentate.

Among other observations on the new governor's outrageous first efforts at a full-blown takeover, Rachel said this:


Right now, [Michigan] Gov. [Rick] Snyder is pushing a bill that would give himself, Gov. Snyder and his administration, the power to declare any town or school district to be in a financial emergency. If a town was declared by the governor and his administration to be in a financial emergency they would get to put somebody in charge of that town, and they want to give that emergency manager that they just put in charge of the town the power to, “reject, modify, or terminate any contracts that the town may have entered in to, including any collective bargaining agreement."

Five days later, in a blog called Michigan Under Threat of Dictatorship. NOW Can We Panic?  I quoted from Michael Moore's "Letter to My Fellow Michiganders", sounding the alarm:


What is most shocking to many is that the new governor, who ran against the Tea Party and defeated the right wing of his party in the primaries -- and then ran in the general election as "just a nerd from Ann Arbor" who was a moderate, not an ideologue -- has pulled off one of the biggest Jekyll and Hyde ruses I've ever seen in electoral politics.


Nothing unusual about a new governor being sworn in in early January, but this particular brand-new governor raised hackles in some circles (okay, in nearly ALL circles outside the corporate honchos and people still having Tea Parties in the midst of the rubble) by stepping off the podium and almost instantaneously barking orders to annihilate anyone outside his own elite space who thought they might be entitled to a taxpayer-funded public education, or wages beyond the truly laughable, or even a retirement free of toil and strife.
For most people bent on taking over an entire state that might have been enough, but some days later this man Rick found the Holy Grail.  An existing Financial Emergency Manager Law that he and his Republican-led legislature then got to work enhancing and extending until it no longer would only be used in--okay--emergencies, but could be tweaked to kill the unions, take over public education and. . .oh, let's say. . .fire duly elected officials in cities and towns that may or may not have potentially fatal fiscal wounds but do have too many poor people and thus can't keep the Gov and his court in the style to which they've become accustomed.

On June 13, 2011, I wrote a blog called The Taking of Benton Harbor and lo and behold, the first inkling of problems with water appeared:


These Republican "small government" devotees took office on January 1 and immediately began dismantling governmental policies and protections, many of which had been put in place long before the parents of these hoo-haws were even born.  As public officials, their not-so-hidden goal is to turn the power of the state over to private interests, and Big Bucks says now is the time.  They can and they will do it, or their name isn't Vast Right Wing Conspiracy.

Just last week Eclectablog's Chris Savage wrote about another Emergency Financial Manager takeover, this time in Pontiac, in order to privatize the water-treatment services and hand them over to a company already in trouble with the DOJ for violations of the Clean Water Act.

Michael Stampfler is Pontiac, Michigan's EFM. He has the dubious distinction of being the first Michigan EFM to use new powers granted by Michigan Republicans to cancel a union contract. What went nearly unnoticed was that last week, he dissolved the Pontiac Planning Commission and replaced it with a smaller number of his own hand-picked, unelected members. But he also did another thing. He made a contract for water treatment services with United Water Services permanent, outsourcing the water treatment to them and laying off city water treatment officials.

And on March 21, 2013, almost three years ago, in a blog called News From Michigan, the Nation's First Dictator State, I wrote:


It could be that with all that's going on in the world you might have missed what's happening closer to home, in the sovereign state of Michigan.  In just over two years, since businessman and venture capitalist Rick Snyder became governor, bringing along with him a Republican majority in the legislature and in most courts (including the Supreme one), with a push from the Tea Party, the Koch Brothers and the Mackinac Center for Public Policy, our beautiful state has suffered under the country's first duly elected dictatorship.

In March of 2011, two months after his inauguration, Snyder pushed through a draconian Emergency Financial Manager law, essentially giving him the authority to appoint one person to take over the governing of any municipality or school system deemed failing by Our Man Snyder.

In November, 2012 the voters, finally coming to their senses, soundly voted down that outrageously unconstitutional law.  A few weeks later Snyder's minions, ignoring the wishes of the voters, not only reinstated the law, they added wording that would keep the voters from ever voting it down again.

This slid by just days after the Republicans stuck it to the already bruised and bleeding unions by making Michigan, the home of the labor movement, a Right-to-Work state.

Just last week, the Republican legislature was back working on a bill that would allow health care providers to refuse services to patients/customers for religious or moral reasons.  It's a transparent smackdown of abortion and contraception, but it could also affect anybody from gays to Muslims to blacks to liberal Democrats.

The point of all this is to amplify the fact that we've been sounding the alarm for years--long before Snyder won his second term handily--and, while there has been some state and national attention from the press, it took a  disaster in Flint--a tragic, wholly avoidable man-made assault on innocent children by poisoning their water with lead--to make what has happened in our great state serious enough to warrant visits from politicians, all too aware of the opportunities, and breathless reporters standing in front of cable news cameras hoping--admit it--to spike their ratings.

On Tuesday, Michigan's Democratic primary election takes place. On Wednesday the politicians, the reporters, the camera crews, and the protesters from outside will pack up their bags and leave.  Will they look back? If past history is any judge, probably not.  The next far-off disaster awaits.

But for the people of Flint, grateful for the attention, hoping it'll finally be the catalyst they need to repair both their city and their lives, let me beg anyone who sees this:  Don't let this die.  Rick Snyder, the governor of Michigan cannot tweet his way out of this.  If he won't at long last take seriously what he has allowed to happen in Michigan, the world needs to camp on his doorstep until he does.

It should be obvious by now that we can't do this alone.

(Cross-posted at Dagblog and Crooks and Liars)
Posted by Ramona Grigg at 2:02:00 PM