The Flint Water Crisis: It's All Obama's Fault

Nearly every day I'm hearing from people who are just now paying attention to what's been going on in Michigan  Their reactions to the latest and the worst insult--the water poisoning in Flint--are many and varied, but tend to follow the same theme:  WTF??

I'm not here to judge, but it's not as if our bleating protestations haven't been wafting through the air for years. (They have been--even before 2011, when the GOP gerrymandered their way into absolute power and Rick Snyder took the oath he pretended he didn't hear.)

It's not as if we haven't been begging Michigan voters not to give ALEC, The Mackinac Center, and the Koch brothers the toehold they so actively coveted.  (We saw them coming long before their hand-picked choice, former CEO Rick Snyder, suddenly appeared on the scene.)

It's not as if we didn't vote in a referendum against emergency managers by a solid margin.  (We did that. All legal and everything. Gov. Snyder appointed them, anyway.)

It's not as if we didn't warn everyone not to vote in Gov. Snyder when he ran for his second term.  (We did that, too.  We had an excellent candidate in Mark Schauer. But every major newspaper in Michigan except one gave their support to Snyder.  (The Traverse City Record Eagle decided not to endorse anyone.)  Kind of pissy that now many of them are screaming for his head--as if they knew nothing--nothing at all--and had nothing to do with his rise.)

We've done everything we could to stop the Snyder administration from destroying our state, only to run up against a political machine so powerful we knew going in it was likely we would fail.  And we did.  Miserably.  It's embarrassing how little impact the Dems in our state have made, considering the evidence we've piled up against the guys who so relentlessly tore our state apart.

Now we have a crisis in the already impoverished and beleaguered city of Flint, brought on solely, completely, and deliberately by the Snyder administration and the emergency manager he appointed, not to assist but to replace a sitting, duly elected city government.

The lead poisoning of the city water system is a crisis of such huge proportions, the shock waves are felt all over the country.  The mainstream media--that same media we've begged for so long to pay attention--is just now stirring.  The sleeping giant has awakened and they're shocked--shocked, I tell you!--at the magnitude of the corruption and neglect.

(I would say we told you so. . .  Okay, I'm saying it:  We told you so.  But thank you, Rachel Maddow, Ed Schultz, and the pathetically few others who lent their voices to our call in an effort to stop this insanity before it lead to something like this.)

The effects of the water poisoning in Flint are not going away.  Thousands of people, including and especially young children, have been harmed by it.  Action is needed NOW, but the Snyder administration and his GOP cronies are bobbing, weaving, fudging--anything to keep from having to take full responsibility for it.

Snyder made his "The buck stops here" speech, intended to be just the ticket to absolve him of wrong-doing.  "I take the blame.  You satisfied?  No, I won't quit!  I'm staying to fix this!" (Not an exact quote, but close enough.)  But even Snyder knows a few words at a press conference won't fix anything.  So he's moved on.  Now it's the blame game.

It's all Obama's fault.

No joke. The Michigan Republican Party put this out last week  (Thank you, Eclectablog): 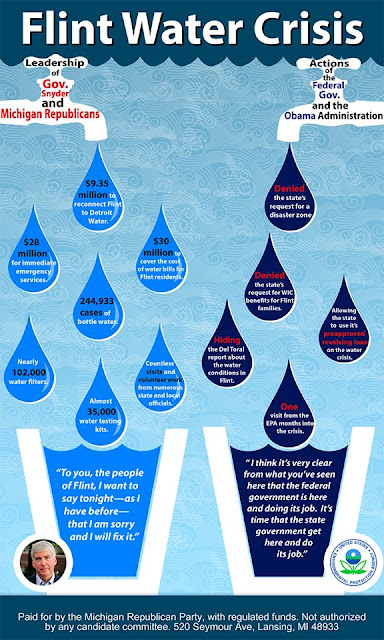 The Feds did delay their intervention.  It seems they were waiting to see what the state was going to do, while the state--namely Snyder--was waiting for an offer so it wouldn't look to his handlers like he was asking Obama for (OMIGAWD!) help.

A stupid stand-off on both sides.  It's an emergency!  Who waits for an invitation in an emergency?  But Snyder and his Boys aren't going to be let off the hook.  Nor are they going to be allowed to take the credit for any aid unless they get off their asses and start pulling those lead-lined pipes out of that system.

The rats are leaving the ship. The two Flint emergency managers involved in this scandal, Darnell Earley and Jerry Ambrose, are nowhere to be seen.  (Oh, wait. . .is that Darnell Earley over there in Detroit, emergency-managing their school system?  It is!  It was. He's gone from there, too.  His next phase is as reluctant witness in front of a House committee investigating the Flint crisis. Those cockroaches can run but they can't hide.)

In an amazing turn-around, Snyder has decided Flint no longer needs an emergency manager.  The patient is cured!  It's a miracle!

There is a new mayor in town and he has complete faith in her ability to let him off the hook.  The new mayor, Karen Weaver, will be testifying this week in front of a House Democratic Committee on the Flint Crisis. She has appeared on cable and network political shows, is becoming a regular on Rachel Maddow's show, has met with Hillary Clinton, who has promised to do her best to help, and is reaching out to anyone who will listen about where the blame lies and what needs to be done now.   If Snyder thought he had an ally in Mayor Weaver, he's as deluded as he was when he came up with that cockamamie emergency manager plan.

News flash:  Bernie Sanders is setting up campaign headquarters in Flint.  And you've heard there's going to be a Democratic debate broadcast from Flint in March?

Now if those new-found friends could only drink the water.


NOTE: The water crisis time-line is here.  (One clarification. The MJ article says Snyder handed over his emails the next day after being pressured.  That's true.  But they were heavily redacted--some pages entirely redacted--and many pertinent emails are missing.  We're still waiting for those.)

(Cross-posted at Dagblog and Crooks and Liars)
Posted by Ramona Grigg at 5:15:00 PM