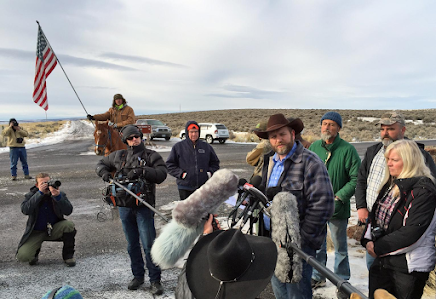 You should know I'm writing today not to inform or enlighten but simply to make fun.  Those militia guys in Oregon holding the Malheur Wildlife Refuge building hostage are like big-footed rodeo clowns in cowboy hats and their pratfalls are just too good to pass up.

The backstory in brief:  The Hammond family, ranchers leasing federal land in Oregon, near where the "stand-off" is taking place, were accused of deliberately setting fires on government property. The alleged violations vary from covering up an illegal deer hunt to burning down forests, either to create firebreaks or to create more grazing land.  They've been embroiled in court battles for years, trying to make the case that even though the Feds (that's us) own the land, the fact that they pay good money to lease it should give them the right to lay waste to it if they so choose.  They see themselves as homesteaders, with the ultimate goal complete ownership.  The Feds keep saying "uh-uh".

Enter Ammon and Ryan, the sons of Cliven Bundy (remember him?), who live in Nevada but got wind of the Hammond's plight in Oregon and decided it was time to resurrect an armed insurrection against the gov'mint.  And, since they and their cohorts are apparently between jobs with plenty of time on their hands, now was as good a time as any.

They went on up there on their own, without so much as an invite from the Hammonds and found to their surprise that. . .OMG. . .they weren't even welcome!  In fact, the Hammonds and their neighbors got downright hostile, putting up signs that read, "Bundy Militia go home"  and "No Bundy caliphate".  So the Bundy Bunch took it on themselves to occupy a vacant Fish and Wildlife building instead.  For God and country and something, something.

Someone said they just happened to find a ring of keys near the building, which kind of takes away from the whole potential shoot-em-up, bust-in-there-by-god scenario, but the point is, they took over a government building.  Armed to the teeth.  With guns and everything.

Everything except warm socks and toilet paper and snacks, which can be a problem in the Oregon boonies in winter. So this motley handful of brave men took to Facebook to rally the troops, sending out requests for supplies, releasing a (irony alert!) United States Post Office box number so that shipments can arrive safely. 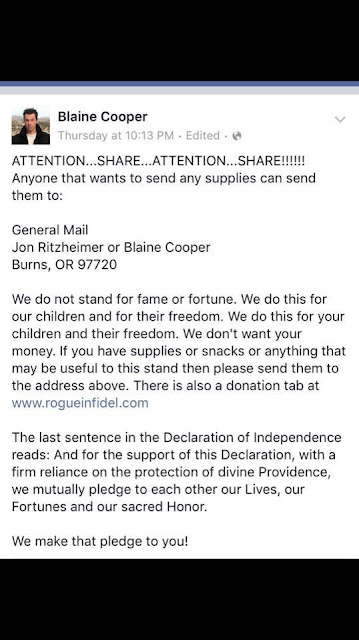 At first the Bundy bunch said they were willing to stay there forever, if necessary.  They said they might have to kill or be killed.  They have guns.  They have ammunition.  They have an old guy sitting under a blue tarp who appears to be their PR person.  He talks to the press, who seem to have no problem coming and going.

In fact nobody seems to have a problem coming or going, including the Bundy bunch:


Their supplies look to be dwindling and militia men who overtook the Malheur Wildlife Refuge in Oregon have pleaded with sympathizers to send food, but law enforcement tell TPM that the men are free to resupply on their own.

"Right now, they are allowed to come and go as they want," says Bill Fugate, a spokesman for the Oregon State police.

This is not turning out the way the Bundy boys wanted it.  Even their father, the notorious Cliven, is confused by it:


“I don’t quite understand how much they’re going to accomplish,” Bundy said. “I think of it this way: what business does the Bundy family have in Harney County, Oregon?”

To add to the insurrectionists' embarrassment, County residents at a town hall meeting yesterday gave nearly unanimous approval for the "siege" to end:


Multiple residents volunteered to travel with Ward to the refuge Thursday morning and ask the militants to go. “Someone from Harney County, or a group of us, needs to tell them we recognize what you’ve done, but it’s time for you to go home to your families,” said county resident Rob Frank.

Frank said he sympathizes with the group’s anti-federalist views, but believes their tactics will fail to accomplish anything. “They’re welcome to leave, and I’ll escort them out of the county,” said Ward, who added that he didn’t want to see the situation end in bloodshed.

Earlier in the day, Bundy said he and the other people at the refuge did plan to leave eventually. “There is a time to go home. We recognize that,” he said. “We don’t feel it’s quite time yet.”

I'll be honest: I'm hoping it's not over before I finish this.  I sincerely want to make fun and I have a feeling the ending won't be nearly as flat-out wacky as what's happening right now.  A big fat nothing is my guess.

So let's go on with the show.


(Posted, too, at Dagblog and Crooks and Liars)