Sarah Palin: Out. Carly Fiorina: In

In 2007, the story goes, Weekly Standard editor Bill Kristol and a few GOP movers and shakers went on a cruise to Alaska  and met a certain Sarah Palin, then-governor of that great state.  It's safe to say she knocked Kristol's socks off (and his head cockeyed, though he didn't know it at the time).

The word is that Kristol fell head over heels--as much as a Republican operative can--for the sassy, smart-assy former cheerleader and did a little cheer-leading of his own.  This woman, he told anyone who would listen, will be the next Vice President of the United States!  It seemed a simple matter (maybe not to you and me. . .) and somehow they convinced John McCain, the then-presidential candidate, that if a woman would be a good choice, this woman would be spectacular!

And so it went.  McCain didn't become president and Palin didn't become vice-president, but that didn't mean Sarah Palin would just fade away.  No, indeedy.  She's still around, still giving rah-rah speeches, still going for the anti-liberal, anti-Obama laughs.  But nobody is looking to her to be the first female to sit behind the Oval Office desk.  Not anymore.  She has a semi-permanent role as the gal who dishes the diss and keeps 'em rolling in the aisles.  She never wanted to be a politician anyway.  No big bucks in it and besides that, it's work!  (For further discussion, see Game Change.)

For several years post-Palin, there were no other GOP women who showed even the slightest interest in running the country. Then along comes Carly Fiorina, with no political experience save for a couple of CPAC appearances, and it's look out, Hillary!


"Like Hillary Clinton, I too have traveled hundreds of thousands of miles around the globe, but unlike her, I have actually accomplished something. Mrs. Clinton, flying is not an accomplishment, it’s an activity. I have met Vladimir Putin and know that it will take more to halt his ambitions than a gimmicky red ‘Reset’ button."


I love watching Carly Fiorina put on her haughty face, purse her lemony lips and smile her regal smile.  I love the "air quotes" thing.  I love it when she uses her I-mean-business voice to tell us why she would make the best president of the United States of Corporate America. 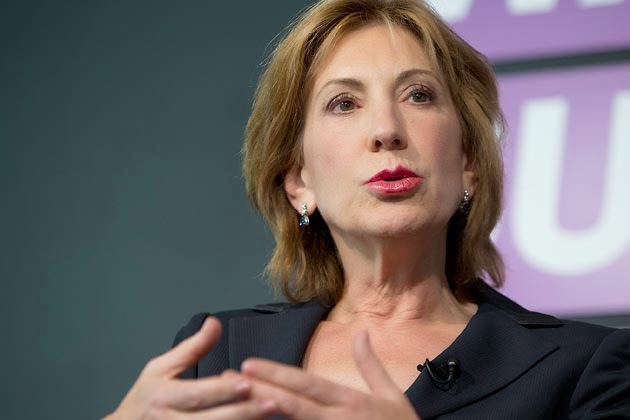 Carly has given a lot of thought to what works best when a woman goes after the highest job in the land.  First of all, forget she's a woman.  Well, not totally.  It would be cool to be the first woman president!  If you must, think tough hard-knocks broad who can slam-bang with the best of them.Take no prisoners!  Get it done!  Enough with those liberals!  They'll be the ruination of us all! (Carly to her cohorts:  Honestly, don't they want us to own this country?)

Consider her thoughts on the California drought crisis:


Carly Fiorina, former Hewlett Packard CEO, failed 2010 GOP nominee for U.S. Senate, and friend of the fossil fuel industry. . .who is considering a presidential bid, told Glenn Beck that the California drought is a “man-made disaster.” And by man-made she means it has been caused by “liberal environmentalists” who have prevented the state from building the appropriate reservoirs and other water infrastructure.

“In California, fish and frogs and flies are really important,” she said. ” … California is a classic case of liberals being willing to sacrifice other people’s lives and livelihoods at the altar of their ideology.”

Says the same presidential candidate who called off-shoring "right-shoring"; the same candidate who bragged about moving parts of Hewlett-Packard out of the country in order to avoid having to pay high taxes here; the same candidate who micromanaged the lay-offs of some 30,000 workers, sending most of their jobs overseas, labeling the move "streamlining".  The same candidate who was fired from said job for questionable practices and for losing the company, and thus the stockholders, tons of money.  ("Not so," says Carly.  But who you gonna trust?)

Carly is all business.  She sees that as a good thing.  Our political system is too full of politicians, she says.  What we need is a female president who understands management, who understands technology.  Carly says she does. (She's against net neutrality--something 80% of Americans are for.) What we need, she says, is a female president who isn't Hillary Clinton.  Don't get Carly wrong; Hillary has given her life to her work. She's just. . .

But, aside from building businesses by quashing government interference, what does Carly have in mind for her presidency, should she, um, win?  I think she's probably pretty smart.  (That's a plus when you want to be president, but it's not a qualification written in stone.) I'm pretty sure she knows she won't just be the CEO of a company, she'll be the CEO of the whole damn United States.  Of America.  That's--count 'em--50 states.  Big ones.  Lots of people.

She must have thought beyond just being the anti-Hillary, as she's depicted (and as she no doubt relishes), but has she thought beyond being the CEO? There is a whole contingency (almost everybody) who think Carly made a lousy CEO while at HP, but Carly isn't one of them.

In her announcement video, she makes no mention of her qualifications (showing she has a sweet side), and to her credit she left out the Demon Sheep. (She lost to California Senator Barbara Boxer in 2010--by 10 points--thereby giving rise to the notion that it might take more than a phony red-eyed sheep to pull the wool over some peoples' eyes.)  But Carly thought the sheep ad was a good one.  "Some people thought it was funny," she said.

Well,  yeah, we all thought it was funny.  But was it wise?

But never mind. Carly says it might have looked like she lost big time but, in fact, she only slightly lost because in the primaries she outshone every other GOP hopeful.  She won the primary.  She WON.  The primary.)

Despite the high marks she gives herself, Carly Fiorina will not be the next president of the United States.  Carly knows that as well as I do, but what I'm seeing from Carly is a much bigger ambition:  She really, truly wants to knock that ditzy Sarah Palin off her high horse, climb onto that bejeweled saddle, and be The Witty Smart Spokeswoman for The New GOP.

Good luck with that, Carly.  But hang around for awhile, won't you, honey?  Strictly for laughs, of course.  You make it hard for us to take you seriously.


(Cross-posted at Dagblog, Liberaland, and FreakOutNation. Featured at Crooks and Liars MBRU)
Posted by Ramona Grigg at 10:11:00 AM