Vandals, I Don't Get You. Can We Talk? 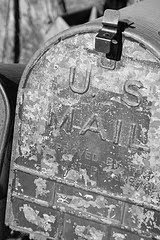 When I was around seven years old I wandered over to our neighbor's roadside mailbox and stole the mail out of it.  There was a vacant lot between their house and ours and I remember sitting in the weeds opening that mail. (The mail that, at seven, I doubt I could even read) Then I got scared.  I tore it all up into little pieces.  I got caught--I don't remember how--and my mother marched me over to our neighbors, where I had to apologize for stealing their mail and tearing it up.

What I learned through my tears was that one piece of that mail--the pretty one with the red and blue stripes around the edges--was a long-awaited letter from their soldier son who was fighting in the war overseas.   That was seven decades ago and I still cringe at the memory.  They were sweet people, those neighbors, and they were kind enough to accept my apology, but I've never forgotten how I felt when I had to admit, to them, to my mother, and to myself, that I did a terrible thing.  What was I thinking?  What would make me steal and then destroy something that didn't belong to me?  I didn't do it to deliberately hurt our neighbors but the end result was that I did hurt them.

But even though I was a vandal myself--no getting around it--I've never understood acts of vandalism.  I've heard all the excuses-- pent-up rage, drunkenness, group dynamics, an extreme sense of privilege--but every act of vandalism is a criminal act.  Deliberate, wanton destruction is a crime.  It's not cute, it's not cool, it's not ever justified, and it can't be considered anything less than what it is, just because the people who do it aren't your ordinary criminals.

So last week this happened:  University of Michigan frat members took over 45 rooms at a Michigan ski resort and over the course of a couple of days did more than $50,000 in damage:


Treetops Resort manager Barry Owens said the students were escorted from the premises by Michigan State Police last weekend after causing $50,000 in damage. The resort is in Dover Township near Gaylord.
Owens said Sigma Alpha Mu fraternity members caused significant damage to furniture, carpet, walls and ceilings.
Sigma Alpha Mu Michigan chapter President Joshua Kaplan says his members "are embarrassed and ashamed of the behavior" of some members. He says the chapter "accepts full responsibility" and "will be working with the management of the resort to pay for all damages and cleaning costs."
"This behavior is inconsistent with the values, policies, and practices of this organization," Kaplan said in a statement. "We will work within our own organization and with university officials to hold those who are responsible accountable for their actions.
Kaplan said there will be no further comment from his chapter or organization.
"They caused an excessive amount of damage," Owens said. "The rooms were just a pigsty. Unfortunately, I've been in this business for 30 years and it's the worst condition of rooms that I've ever seen. There were broken ceiling tiles in the hallway, broken furniture, broken windows. There's carpet that's going to need to be replaced."
Owens said there were more than 120 people, men and women, in about 45 rooms.
"A lot of the rooms were just very, very dirty," he said. "There were holes in the walls and different things like that. They were very disruptive to additional guests that were here."
Owens said prior to the students being removed, resort staff attempted to rectify the situation.
"We tried to address it with them, but we made a mistake and took these people at their word when they said they would change their behavior," he said.
The resort is considering its options, including pursuing criminal charges against the fraternity. Owens said the resort also has a meeting planned with university officials.
What about the criminal charges against the students? What happened after the Kids Just Want to Have Fun Gang were "escorted from the premises" by the State Police?  Were they fingerprinted and then thrown into as many cells as it took to fill?  Are they still there?

(And whether, at some future date, they're going to be thinking about running for public office. . .)