Say What You Will About Torture, It's Still Torture 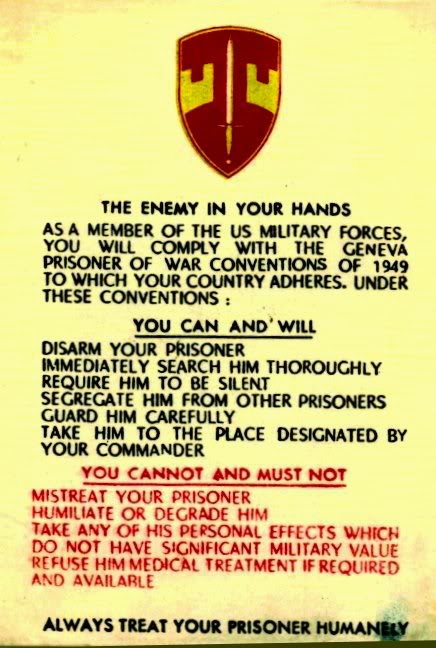 Last week the Senate Intelligence Committee released their report on the CIA's detention and interrogation program, and, while much of it had already been hashed over soon after the events at Abu Ghraib, there are enough new revelations within the report's 525 page summary to cause us to get stirred up all over again.

We know now, for example, that the CIA outsourced our entire interrogation program to two psychologists who had no real experience, yet managed to bill and receive some 80 million dollars for their services before someone thought to question their (or our) wisdom in such matters.

We know, too, that the CIA agreed to an indemnification clause that would protect those two from any mean thing we might want to do to them when we found out.


By 2005, the psychologists, James Mitchell and John "Bruce" Jessen of Spokane, WA, had formed a company specifically to contract with the CIA. The agency, in turn, outsourced virtually all aspects of the program to Mitchell, Jessen & Associates in the form of a contract with options totaling more than $180 million.

By 2009, the psychologists had collected $81 million on the contract when the Obama Administration abruptly terminated it. The Senate report also notes that in 2007, Mitchell, Jessen & Associates received a multi-year indemnification agreement from the CIA to shield the company and its employees from legal liability arising out of the program. So far the CIA has paid out more than $1 million pursuant to the agreement.

Sen. John McCain, a former torture victim himself, set aside politics for the moment and eloquently defended the Senate Committee's report--a report in the making, by the way, since 2007, and which contains some 6700 pages, most of them still classified :


“We have made our way in this often dangerous and cruel world, not by just strictly pursuing our geopolitical interests, but by exemplifying our political values, and influencing other nations to embrace them. When we fight to defend our security we fight also for an idea, not for a tribe or a twisted interpretation of an ancient religion or for a king, but for an idea that all men are endowed by the Creator with inalienable rights. How much safer the world would be if all nations believed the same. How much more dangerous it can become when we forget it ourselves even momentarily.

“Our enemies act without conscience. We must not. This executive summary of the Committee’s report makes clear that acting without conscience isn’t necessary, it isn’t even helpful, in winning this strange and long war we’re fighting. We should be grateful to have that truth affirmed.

“Now, let us reassert the contrary proposition: that is it essential to our success in this war that we ask those who fight it for us to remember at all times that they are defending a sacred ideal of how nations should be governed and conduct their relations with others – even our enemies.

“Those of us who give them this duty are obliged by history, by our nation’s highest ideals and the many terrible sacrifices made to protect them, by our respect for human dignity to make clear we need not risk our national honor to prevail in this or any war. We need only remember in the worst of times, through the chaos and terror of war, when facing cruelty, suffering and loss, that we are always Americans, and different, stronger, and better than those who would destroy us."

So, of course, former Vice President of the United States Richard "Dick" Cheney, having to explain for the umpteenth time that approved interrogation methods are not torture! weighed in:


"The report is full of crap, excuse me," Cheney said during an interview on Fox News.


Before the report was made public, George W. Bush appeared with Candy Crowley and had this to say about it:


"I'll tell you this," Bush said after clarifying that he hadn't read the Senate report yet. "We're fortunate to have men and women who work hard at the CIA serving on our behalf. These are patriots. And whatever the report says, if it diminishes their contributions to our country it is way off base. I knew the directors, the deputy directors, I knew a lot of the operators. These are good people. Really good people. And we're lucky as a nation to have them."


No further word, now that the report is out, from Bush, who, the reports suggest, was either uninformed, misinformed, disinformed, or mutton-headedly obtuse on the subject of torture.  (Except for that one time when he "expressed discomfort" on hearing about a prisoner chained to the ceiling who had to defecate himself, but luckily was wearing diapers at the time.)

We've been talking about torture for decades, but we got temporarily serious about it again after we were forced to concede that the images coming out of Abu Ghraib were not fictions put out by people who hate us, but were real and horrible and, my God, who are we?

But it went on, and we kept hearing about innocent prisoners who were being tortured along with the bad guys--none of whom, we now know, told us anything that might have justified their torture. Collateral damage.  It happens.

We still talk about torture as if there are grey areas yet to be examined; as if there are circumstances under which the deliberate inflicting of horrific pain, soul-wrenching terror, and dehumanizing humiliation can be justified, explained away, given a special dispensation from an otherwise sane moral or ethical code of conduct.

We want to believe we're not that bad, and the only way to convince ourselves is to fool ourselves into believing there are circumstances under which torture is necessary.

There are no circumstances under which torture will ever be okay.

We should have known that outsourcing our torture program wasn't going to allow us to disavow what was being done in our name.

It shouldn't have taken seven years for a Senate Committee to finally publish a report that states the obvious:  We systematically sanctioned a system where gruesome torture techniques were used against human beings, and even after we knew it we didn't do enough to stop it.

There are punishments that are justified against evil-doers.  We need to show the world we know how to do this.  We need to make our own perpetrators pay.  And it's not as if we'll need to employ enhanced techniques to figure out who they are.  They are the people we thought they were.

(Cross-posted at Alan Colmes' Liberaland and at Dagblog. Featured on Crooks & Liars)
Posted by Ramona Grigg at 4:12:00 PM