The gazillionaire Charles Koch, the Right Wing benefactor whose father was a co-founder of the John Birch Society,  the same Charles Koch who, along with his brother, David, works tirelessly against any sign of government interference when it comes to health care, public education, infrastructure, climate change, or  aiding the pitifully down and out, and who most generously funds any person, politician or party promising to fight along with them on the Kill the Government Before They Kill Us battleground--that very same Charles Koch has just written a whopper of an op-ed in USA Today extolling the virtues of "real work" and "real values" (surprise!) and decrying the existence of anti-business government regulations. (Double-surprise!)

Every now and then--as if we don't get enough of him second hand--he comes out of the shadows and into the light and says publicly what he and his brother, through their various foundations, including the anti-government, pro-them organization, Americans for Prosperity, have been pressing their free-market screw-the-poor minions to go along with for many dozens of years.

A sampling of his USA Today piece:


"When I was growing up, my father had me spend my free time working at unpleasant jobs. Most Americans understand that taking a job and sticking with it, no matter how unpleasant or low-paying, is a vital step toward the American dream. We are in for more trouble if young people don't find that all-important first job, which is critical to beginning their climb up the ladder.

Finally, we need greater incentives to work. Costly programs, such as paying able-bodied people not to work, are addictive disincentives. By undermining people's will to work, our government has created a culture of dependency and hopelessness. This is most unfair to vulnerable citizens who suffer even as we say they are receiving 'benefits.'

I agree with Dr. Martin Luther King. There are no dead-end jobs. Every job deserves our best. 'If a man is called to be a street sweeper," King said, ' he should sweep streets so well that all the hosts of heaven and earth will pause to say, 'Here lived a great street sweeper who did his job well.'"

Dibs on the throw-up pot.  And let me just sit a spell; I'm feeling pissed faint.

This from a man who has advocated his entire adult life for the total destruction of a system of government purportedly hindering the ability of any citizen to make his or her fortune.  Never mind that his family is ranked the second richest in the entire country.  Their net worth is $89 billion.

Wage inequality has become so lopsided the top one percent owns 40 percent of our wealth.  Our once-vibrant middle class has dwindled to a precious few, with the union-starved working poor making up the majority of our work force now.

But beyond that, Charles Koch, in his phony bid to convince Americans that the poor are simply lazy and the free market will work for everybody no matter what we've heard, cites Martin Luther King, of all people, as an example of a person who understood how these things work.


"Charles Koch was not simply a rank and file member of the John Birch Society in name only who paid nominal dues. He purchased and held a "lifetime membership" until he resigned in 1968. He also lent his name and his wealth to the operations of the John Birch Society in Wichita, aiding its "American Opinion" bookstore -- which was stocked with attacks on the civil rights movement, Martin Luther King, and Earl Warren as elements of the communist conspiracy. He funded the John Birch Society's promotional campaigns, bought advertising in its magazine, and supported its distribution of right-wing radio shows.

Charles and David Koch came by their Bircherish notions naturally.  In Claire Conner's chilling memoir, Wrapped In A Flag (a recounting of Conner's life as the daughter of founding members of the John Birch Society growing up in a house where her parents' every waking moment was devoted to the destruction of Communism and the government that was in cahoots), she had this to say about the Koch brothers' father, Fred Koch, whose fortunes began while traveling across Russia overseeing the installation of 15 oil refineries for the Soviets:


"In 1960, a little over a year after he became a founding member of the John Birch Society, Fred published A Businessman Looks at Communism, a harsh critique of the Communist system.  The book became a hit in the growing anti-Communist movement . . . . .Koch's book outlined the steps the Communists planned to take over America:  'Step One:  Infiltration of high office of government and political parties until the president of the U.S is a Communist. . .even the Vice presidency would do, as it could be easily arranged for the president to commit suicide.'
Step Two was a general strike, which 'could bring our country to its knees.'  Wrote Koch, 'Labor unions have long been a Communist goal. . .the effort is frequently to make the worker do as little as possible for the money he receives.  This practice alone could destroy the country.'"

I doubt if any newspaper in the country would turn down an op-ed submission from someone like Charles Koch (I wonder if they had to pay him?), and USA Today is no exception.  This had to be the catch of the year for them, and it's paying off big time in exposure.  But where was the rebuttal for such an obvious propaganda piece?  USA Today often publishes "the other side", giving someone else the chance to take the opposite view.  (Say, from Bernie Sanders?)  Not this time.

From now until November we'll be seeing Koch-inspired disinformation with a vengeance.  They've even found us up here in the north woods, where hardly anybody lives.  (Though the ones who do, I'm sorry to say, are mainly Republicans.  Many, many, many of them are on unemployment, are underemployed, are on food stamps, and rely on Medicaid for their health care, but they've bought into the lie about the government coming to take away their rights.  I don't know how to explain it, and I don't even try.)

This is an example of the primary election materials that came to our mailbox just this last month.  All endorsed and paid for by The Americans for Prosperity.  This is just the beginning.  They have more money than dozens of small countries across the globe and they're willing to spend it to get what they want in November. 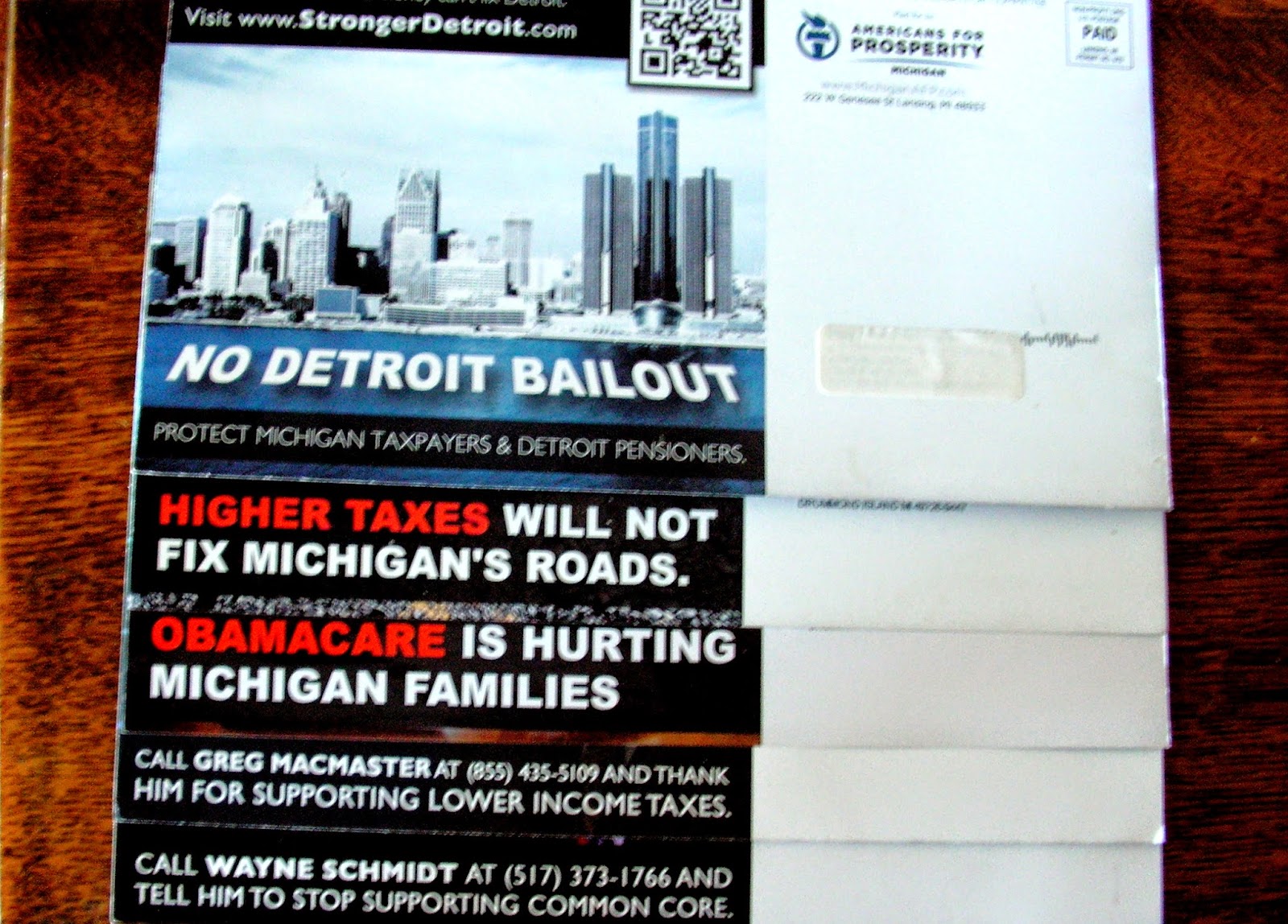 Charles Koch and those like him will go to any lengths to create the oligarchy they've always dreamed of.  We have the knowledge and the wits to stop them but there is no question that they can outspend us.  They can use their power to buy airtime (and stations), to have open access to op-ed pages (and buy newspapers), to get their message across in a million different ways while working, in ways that are staggeringly effective, to suppress ours.

If money can buy anything, we're in trouble.   Our job now is to prove that it'll take more than huge semi-loads of cash to get us to give up on a country we've worked so hard to build.  They don't own us.  Not yet.  There's still time.