These Children Are Lost and They've Entered Our Village

Thousands of Latin American children have been arriving in the U.S. over the weeks and months, in scenarios more like that of a fictitious screenplay than of real life.  Out-of-control gangs, drug cartels, and corrupt government officials are the antagonists in horror stories of a kind we can only imagine. Poverty, exploitation, rape, torture, murder--so common now in Honduras, El Salvador, Nicaragua, there is little chance those countries will ever float free.

The parents, seeing no future for their children, have taken the most extreme, heartbreaking measures: they're sending their young ones away.  They're forced to pay dubious characters large sums of money to transport their kids over the Mexico-U.S border into what they've been told would almost assuredly be a safe sanctuary.

The children, some of them barely walking age, don't know why they were sent away or why they're here.  They don't even know where "here" is.  They're in a strange place, far from anything familiar,  their only safety in a group of other terrified children.

The older ones, hardly old enough to take care of themselves, have been charged with caring for the young.  By the time they've reached the border leading into the U.S, they've traveled over a thousand miles from home.  They're dirty and hungry and the fear of what's ahead (or behind) stays with them every waking moment.

Once across the border they're in desperate need of some proof that they are safe.  The promise was that the hellish thousand-mile journey would be worth it in order to get them to a place where they could breathe free, where they could ease their own fears and those of the smaller children they carried, and where, maybe, possibly, they might finally face a life where there is hope.

Instead, soon after they cross the border they're being met either by officials who move them into jail-like pens where they'll wait until, most likely, they'll be sent back to their home countries, or--and this is where it gets crazy--by angry protesters carrying ugly signs telling these small, defenseless beings to go home.  They're being told by snarling grown-ups that we don't want them here.

These children are refugees from war-torn countries.  We are the kind of country that demands of other countries the safe passage of refugees.  The U.N has already declared these fleeing Latin American children refugees and is asking the United States to treat them accordingly.  If we turn these children away, forcing them to return to their homes, we do it knowing we're sending them back to a life of abject, unrelenting misery.

There is no good answer, no ready solution when thousands of children arrive at our borders without our permission, but at this moment we're in the throes of a humanitarian emergency.  We have children in need in our midst and if we're who we think we are, we will dry their tears and calm their fears.  We will fill their bellies and tuck them into warm beds.  We will keep them safe.  They came out of the darkness and into our light.  While we didn't ask for this, they are children and they are here and now it's our job to take care of them.

So who are these screaming, sign-carrying monsters who see these kids as some kind of marauding enemy?  Where do they come from?  Who taught them to hate so broadly they think nothing of scaring already terrified kids? 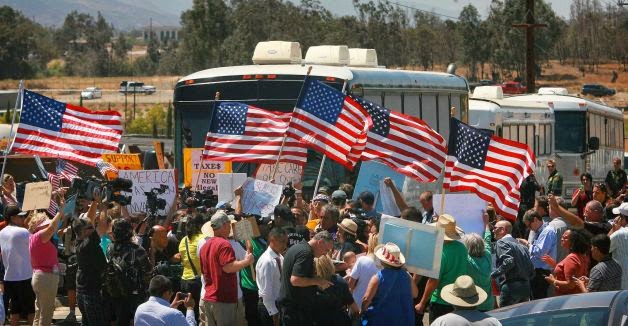 This was the scene near an intake center in Murrieta, California last week.  The buses being held back by American-flag-waving protesters are full of scared kids who spent many uncomfortable if not terrifying days trying to get to our border and the safety beyond.  They were instead caught by border patrol agents and put on these buses heading for a detention center, where they're to be housed until our people can figure out what to do with them.

In quiet moments I see in my mind's eye busloads of frightened children.  I see a menacing mob pushing toward those buses, blocking the drivers from moving forward.  I see signs that say, "Go away!  We don't want you here!"  And I have to remind myself that this is not a scene from their own ravaged countries but is, instead, a scene unfolding in the United States of America.

I worry about those children and what will happen to them, but I worry, too, about the people waving those signs and turning away busloads of frightened, defenseless children.  They are a problem; their numbers are growing, and someday soon, when we've figured out how to keep those kids safe, we're going to have to figure out how we're going to live among people who would knowingly, purposely do this.

(Cross-posted at Dagblog and Alan Colmes' Liberaland. Featured on Crooks and Liars MBRU)
Posted by Ramona Grigg at 9:34:00 AM